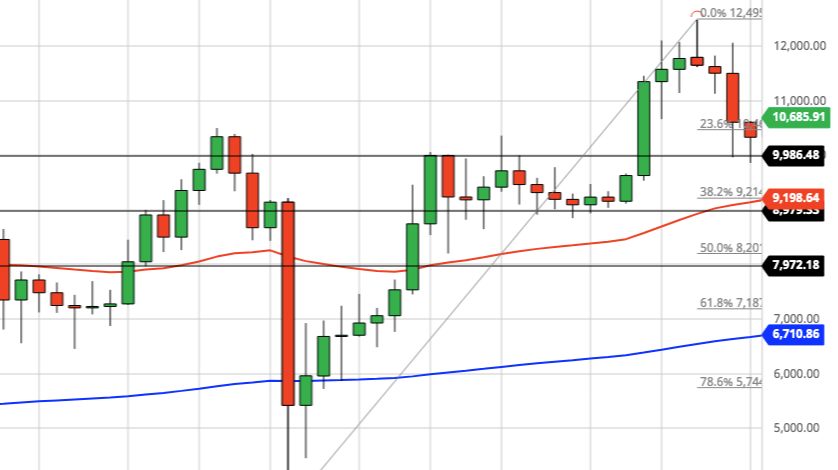 Bitcoin initially fell again during the week ending September 13th, reaching beneath the $10,000 level before finding support and forming a hammer on the weekly chart.

Bitcoin fell again during the week ending September 13th, testing support around $10,000 again before finding buyers slightly underneath to form a hammer and recover to around the $10,500 level. While this is a bearish scenario that does has us more closely monitoring support levels, the medium-longer term uptrend is still valid as BTC has not broken $10,000, the 50 Week EMA, or the 200 Week EMA, all of which are major support levels.

Bitcoin is currently trading above the 50 and 200 Week EMA's, which should act as significant long-term support below at ~$9,200 and $6,710, respectively. If Bitcoin were to fall off a cliff and drop below the $10,000 level, where there is massive support and the 50 Week EMA at ~$9,200, look for deeper wallets to step in to buy around the 200 Week EMA around $6,600. If Bitcoin falls below that, the new Bitcoin uptrend is in jeopardy.

After this fall, as is common in crypto markets, it's very possible that Bitcoin falls below $10,000 for a short time, as it appears to be falling in concert with Gold and equities, all of which have seen a lot of volatility and selling off over the past 1-2 weeks. As we approach the US election in less than 2 months, the volatility is expected to continue, and we suspect the bloodletting will continue. Either way, there should be a lot of volume which is ideal for trading but may create some uncertain as to the short-term trend and direction.

Looking ahead, Bitcoin is a buy on the dips scenario, with medium- and longer-term investors looking to add on pullbacks, particularly the $10,000 and ultimately $9,000 levels below, which should be ironclad support. Next immediate resistance overhead is the July 2019 highs around $14,000. The good news is that $14,000 is probably the last stop before Bitcoin runs up to new all-time highs around $20,000, as there should not be many sellers between $14,000 and the previous all-time highs around $20,000 US. Longer-term, the sky is the limit for BTC, especially if the Lightning Network Upgrade is implemented in the next 12 months to accommodate new money entering the market and mitigating high transaction fees. One positive note is that once Bitcoins breaks $12,000 and then $20,000, it should be a quick run up to $30,000 or $40,000, as there will be little selling resistance. In fact, there might be a surprising amount of buy orders set around the $50,000 level as it is only around that price valuation and market cap that institutions will view Bitcoin as an asset class with sufficient liquidity to dabble with. So while you're worrying yourself to sleep tonight over your declining blockfolio, dream of greener days, as they are coming.