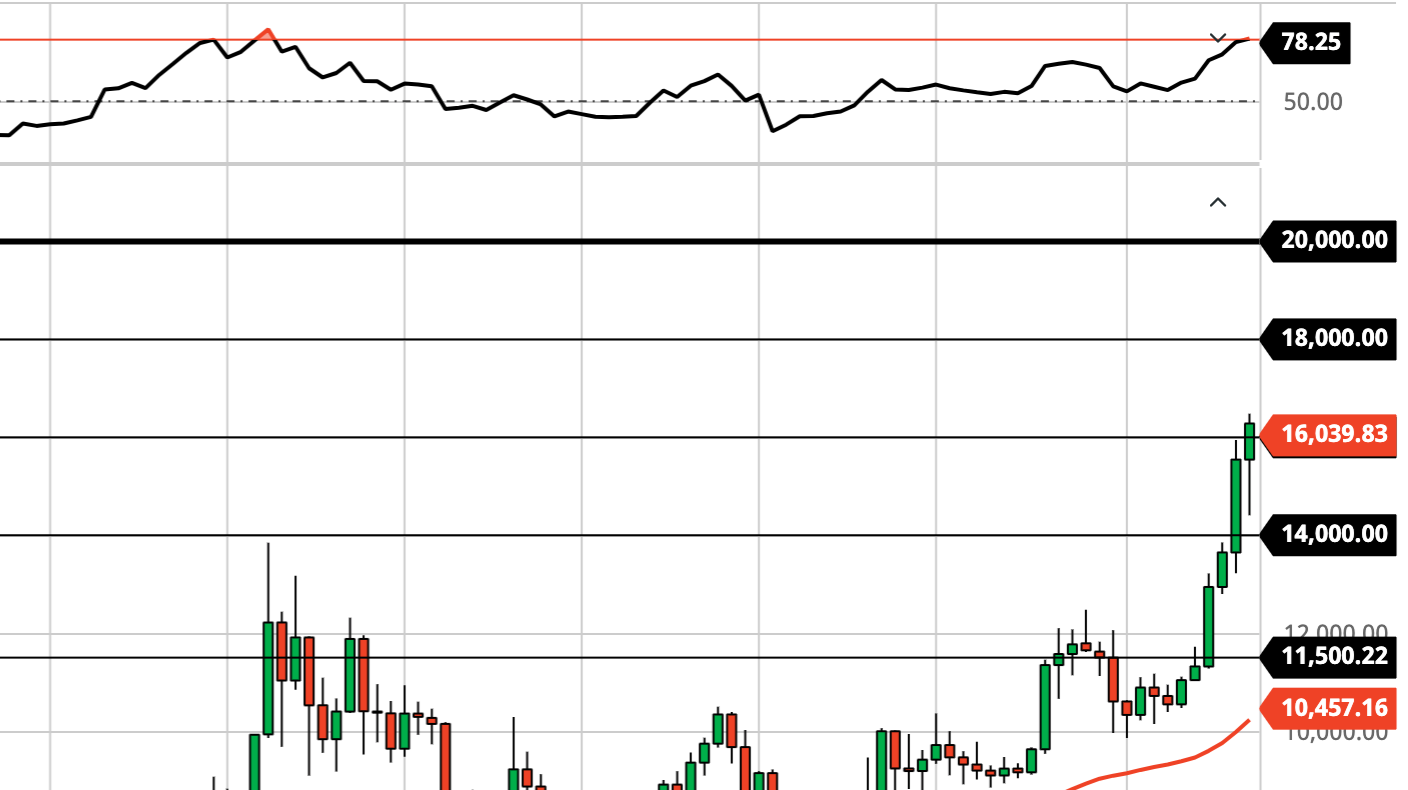 Bitcoin grinded higher during the week ending November 15th, initially falling before finding support above the $14,000 level and rallying to a new yearly high, closing the weekly candle north of $16,000. Bitcoin is starting to look extended and starting to exhibit signs of neutral to slightly bearish behavior. 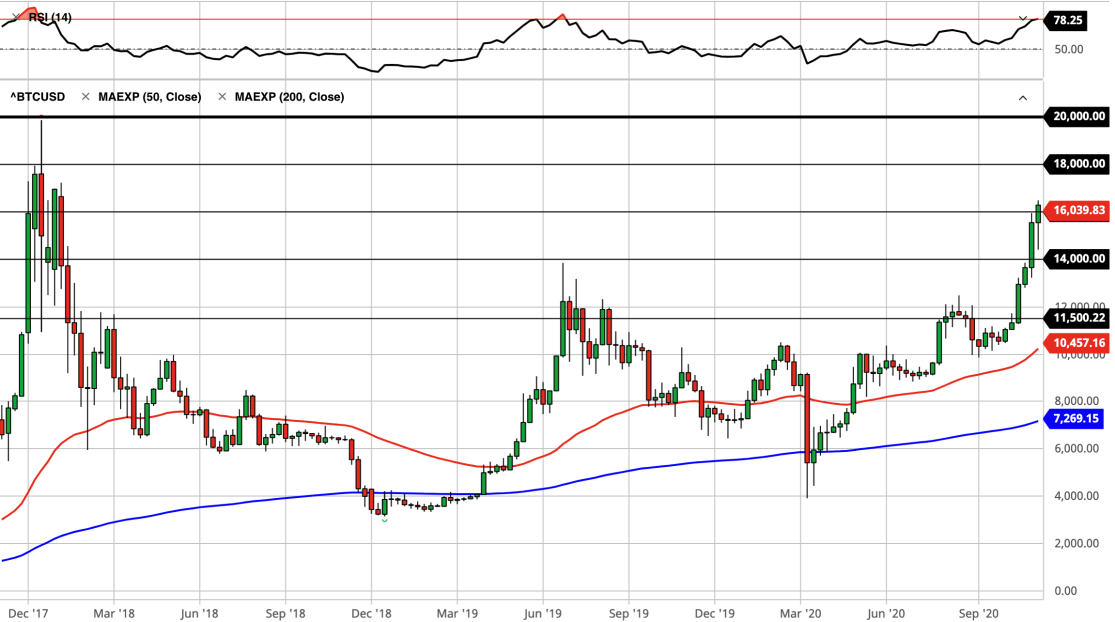 Outlook: Bitcoin continues to rally higher, breaking through $16,000 and making another local high, multi-year high, and bullish breakout on the longer-term chart above. I think Bitcoin could continue running higher to possibly as high as $20,000 on a blowoff top rally before finally pulling back, which would be a great time to take profits. I'm not a seller anytime soon in this market, as crypto is only just really getting started. However, I think the path of least resistance over the next few weeks is probably down, as the buyers have had control for a couple months now. On a technical standpoint, even the weekly chart is starting to read as overbought now, trading just under 80 on the Weekly RSI. This is not a sole indicator to rely on, especially in crypto which consistently trades with high 'overbought' RSI levels during prolonged periods during bull markets as it reoccuringly breaks into new higher levels day after day. I'm not a short-seller in this market whatsoever and not considering taking profits anytime this year nor in 2021 as well.If Bitcoin continues higher, look for $18,000 and $20,000 as targets before a significant pullback. If Bitcoin starts to turn around this week and drift lower, look for support around $14,000, and then $12,000 which is less likely but possible.

In legacy markets, the 10 year yield curve and bonds term premiums are indicating a possible local top in equities forming, and in the midst of a seasonal liquidity drought, contested US Presidential Election and COVID second wave forcing economies to shut down all over the world, there is a strong potential for another selling event over the next 4-5 weeks as Trump goes to the Supreme Court to overrule the election, all the meanwhile a second COVID stimulus package remains firmly out of grasp for tens of millions of Americans in financial dire straits. Expect more volatility, which may give Bitcoin one final dip to buy in late November/early December before heading higher into uncharted territory we've all been projecting for years now.

Support: Look for support near the $14,000 level, which is former resistance, recently to a minor degree and the 2019 highs. I think pullbacks at this point are pretty shallow, as many Bitcoin bears from over the past 4-5 years are not only turning bullish but personally accumulating or considering adding BTC to their companies' balance sheets. $12,000 and $10,000 are both lower support levels which should find vociferous buying. The 50 Week EMA is now trading above $10,000 and the 200 Week EMA is north of $7,200 and rising, already over $3,000 higher than the March lows which found support at the 200 Week EMA. That is my worst-case scenario Trump Relection/COVID wave 2/US Civil War long-term value buy level, though I doubt we reach those levels again.

Resistance: Bitcoin broke through $14,000 which was my notated final major resistance level before continuing onto the ATH at $20,000. Now that that has been overtaken as well as $15,000, which would have been my subsequent resistance level given the large round psychological number, I don't see much selling between here and $19,000 or so. However, I think $20,000 will present massive resistive pressure, mostly from short-term traders, Elliott Wave Traders looking to take profits from this probably Wave 3 move in order to reload on a Wave 4 pullback, or the few remaining retail traders who got sucked in at the top of the 2017 crypto bull market hype, although I'm confident probably 80% of them have capitulated long ago - not that they were a significant source of liquidity in this market anyway. I don't think $16,000 is necessarily a resistance level, I just think the buyers are running out of steam in the short-term, as this move has been pretty exhaustive in nearly doubling Bitcoin in only a couple months. Bitcoin needs to cool off and digest these gains a bit - not even that much necessarily - before continuing higher.