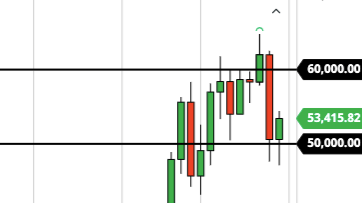 Bitcoin sold off aggressively last week, dropping from about the $62K level down to about $47.5K over the weekend before bouncing, recovering a bit to just above $50K to end the week on a bearish note. However, we're off to a good start this week with Bitcoin finding buyers to buy the dip, taking us to about $53.5K early in the week. It's early to say but Bitcoin is looking like it's forming another standard bull market post-corrective rally which should take us to new highs within a few weeks. 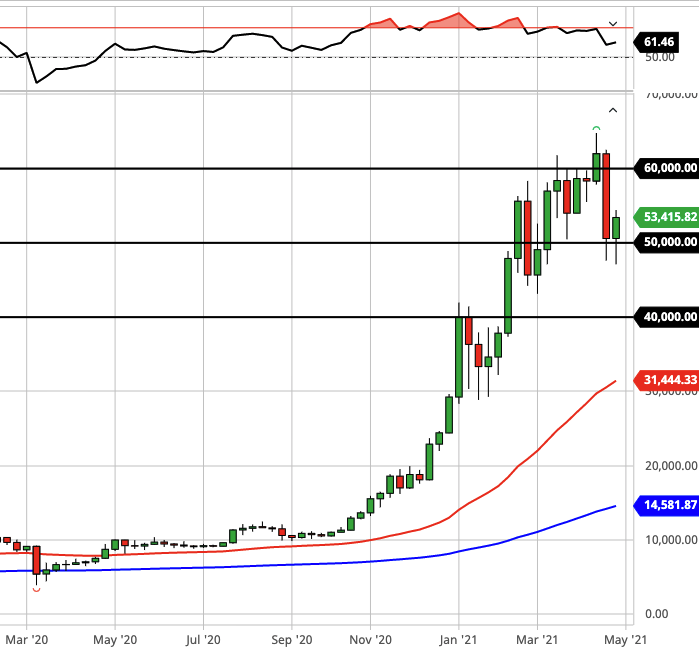 Bitcoin appears to be putting in another higher low with $50K having served as support in this most recent ~25% bull market correction. While these pullbacks seem daunting, they are very typical in crypto and are actual productive in helping to wash out weak hands and overleveraged positions, such as 150x longs on Bitcoin futures, BitMex, etc. These are counterintuitive to Bitcoin's mission and, as you can see, can quickly lead to a stop-loss run causing a steep selloff, as has already happened multiple times during this bull market.

Regardless, bull markets cannot go straight up so this is validation that Bitcoin is in a healthy and sustainable long-term bull market. They also provide great opportunities to add value to your existing positions. If Bitcoin can recover more lost gains this week and finish on a green note, then we should look to recapture $60K sometime this Spring and head to higher heights.

If Bitcoin breaks below $50K and closes lower, this could be somewhat concerning as $40K would be a major support level and test of the uptrend. However, it wouldn't be totally out of the question, though it would likely prolong the total duration of this macro bull market at least a few months, maybe longer.

RSI has stabilized and recovered a bit, currently at 61 on the weekly chart.

Below is the Bitcoin Dominance (BTC.D) weekly chart, showing Bitcoin's plummet in dominance to levels not seen since mid-2018. This is no concern because as the crypto space grows, so too do other projects with legitimate usecases which take some market share. In previous cycles, Bitcoin was more or less a "finished" project competing against much younger and smaller projects with proportionately smaller network effects. As projects mature over time, we're now seeing Bitcoin's dominance decline over time, making lower highs and lower lows, as you can see.

However, with BTC.D now at a major support level, we should see a bottoming pattern and a strong rally occur over the next few months in Bitcoin's next macro wave up. This will likely be the longer-term wave that takes BTC to $100K or above before a subsequent alt rally soon to follow thereafter. 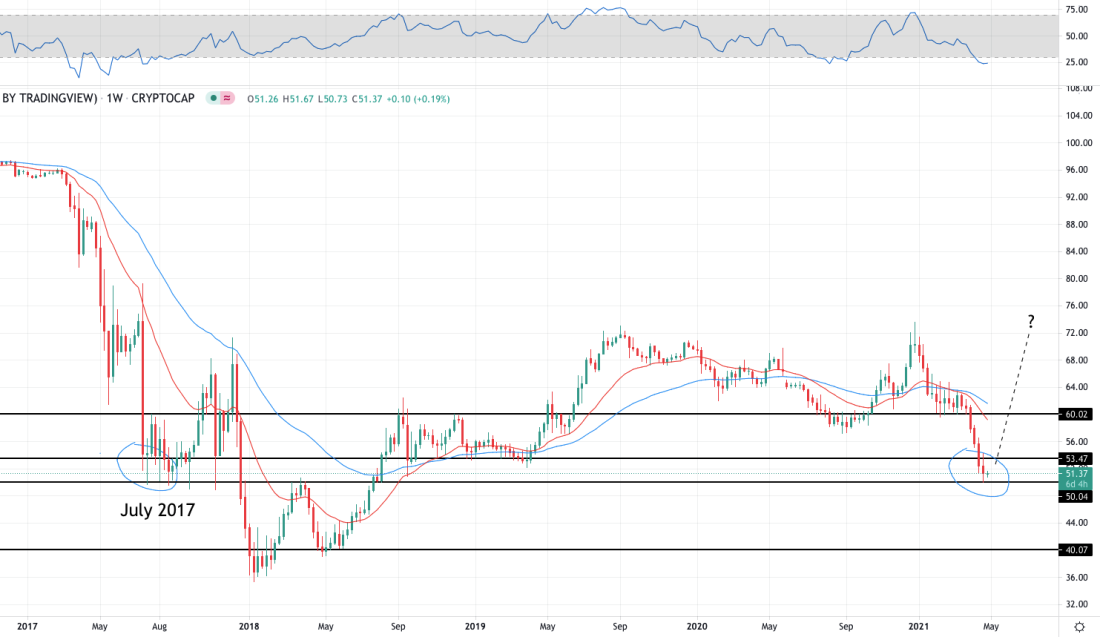 Support: $50K, which was tested and held.