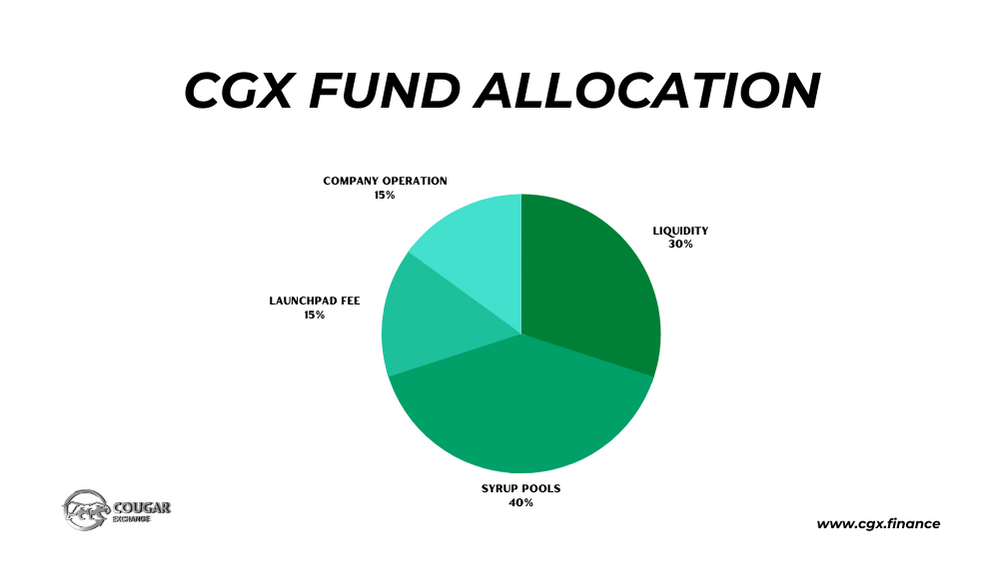 Get in the step for maximum extent with a carefully-planned direction towards a new potential development to maximize users profits. We are pleased to announce that there will be a modification in the availability of Cougar Exchange launchpad fund allocation.

Cougar Exchange is the first project launched on Cougar Launchpad Protocol to approach one of the most efficient funds-raising systems by committing $CRO tokens to grow the foundation value of CGX Token. This accumulated sales format is targeted for the long-term ledger in which has been proportionally funded to implement our strategic enlargement of the whole ecosystem.

As you know, after the success of Cougar Exchange launchpad, 70% of the actual fund raised is spent for bootstrapping the early stages of CGX Token from Farmings and Staking in Syrup pools and adding Liquidity.

After careful consideration from the team of advisors and the board of directors, we decided to use Launchpad fee (which accounted for 15% of total actual fund received) will be added up to redistribute to users by calibrating to the Syrup Pools (CBank is now accumulated). Initially, the Launchpad fee was used to buy back CGS token but we recalculated the possibility of that to the real benefit of CGX Holders and it is not the best way to bring profit to our users.

After the conclusion was made, we will generate more CBank Pools that allow holders to stake their $CGX to earn other valuable tokens than $CGX, especially for the Stable Coin such as USDC, USDT.

Thank you very much!

Cougarswap Ecosystem is a long-term DeFi project that has been on the market since May 2021, with the initial BSC successfully deployed we have now held the reputation as one of the most prestigious cross-chain projects in the DeFi market.