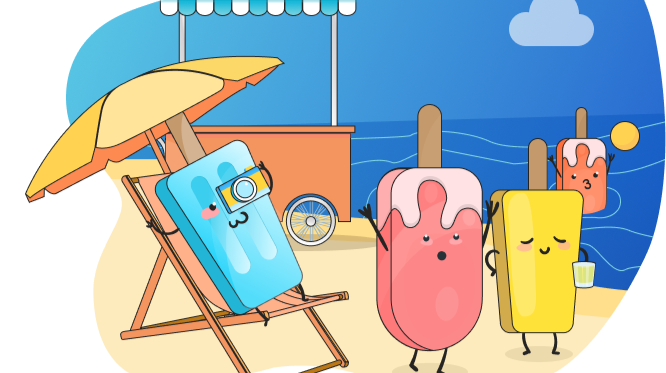 I have to give credit where credit is due and the people coming up with the names for the different DeFi applications because just when I think that all of the good ones are gone a new one pops up that I cannot help but laugh at. This week with the FARM emissions drop additional Binance Smart Chain, BSC, was launched and one is named Popsicle Finance!

Two Popsicle farms were launched the first is the pairing of ICE, their native token, to BNB and the other farm is just ICE the native token! Popsicle is just now launching with them in the phase of the initial farm offering. They have the whole website set up almost in menu type form where your "order" different pairings. Within their farms, they actually list what the return on investment or ROI is broken down into both daily and weekly sets. Popsicle operates across three blockchains and currently has about 8000 users and a total locked value of $100 million USD. The APY's for both of these pairing is fantastic like you would expect with ICE-BNB yielding 2237% APY and the second ICE yielding 150%!

Popsicle combines SushiSwap, PancakeSwap, and UniSwap in how liquidity is provided and follows the same general idea of Harvest in lowering the fees associated with being a market maker. It is currently in its 1.0 stage which only makes sense when you think about how they just launched! They have already begun to bring proposals to the lenders or ICE holders to vote on different ideas. They have also announced the initial plans for the 2.0 versions of Popsicle which is really cool to see!

Two additional Ellipsis Finance pools were also launched with rather normal or standard pairings. The first such pairing was EPS-FUSDT and the second one is EPS-BTC. These pairings are both available to get via PancakeSwap like normal BSC pairs are. Given that these two are rather normal or typical to say the least pairings the APY yield is not the best in the world with both being the exact same APY at 16.73%. Still great yields in general but when it comes to yield farming and crypto not the best in the world. These yields remind me a lot of Compound where they were never the craziest but they were constant. The big difference here is that BSC has such low transaction fees you can really benefit from every last drop of that APY!

The last thing to mention here is even though these were launched when the emissions were dropped they currently do not have any bFARM emissions themselves. What Harvest typically does is run the farms until the next emission drop and then incorporate them into this accordingly.