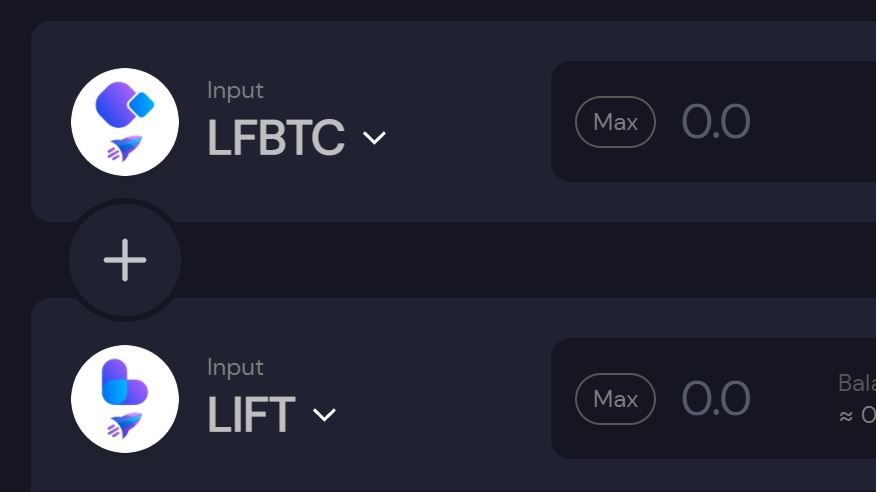 Harvest Finance: I Bit the Bullet and now have dabbled in Lift Kitchen's LP

Now that Ethereum fees are much more reasonable I finally after debating with myself decided to dabble in staking a whole new asset I did not already own on Harvest Fiance. The easy choice here was to choose between the newest farms out there which came via Lift Kitchen's two different LP pools. Further being well myself I decided to choose the one with the highest APY. These farms though do not increase your underlying balance you stake as most yield farms do. Instead, the APY is paid out entirely in iFARM!

Once I had decided to do the LFBTC - LIFT farm I followed the vault instructions to get myself some. Wanting to use the $10 in BAT I have from Publish0x I first bought $10 in LFBTC and then was stumped for a hot second. I then realized the easiest way to get LIFT was to then swap roughly half the amount of LFBTC I had for LIFT and did so. Once this was done I deposited the combo into the LP and took a small break. This is one of the firs times I have used LP pools since when I have found ones I like it gas prices have killed the idea.

I then took this small small amount 0.001996 to be exact and deposited onto the Harvest farm for it and staked it. When I did these inital calculations the APY was 403% and since then it has actually increased to 420%. I spent still a stupid amount to try all this out but with all of the steps it took each transaction that was only a couple of dollars rapidly added up. The total which includes a failed transaction (this really irritated me but it was only a $5 one so it could have been way way worse) was 0.035796509 Ethereum which worked out to roughly $100. Luckily I did all this addition at the end cause I would have lost my mind if I had done so before hand.

The yields though have been INSANE! Remember iFARM is a compounding token so it in itself will do a ton of work but the breakdown at the APY at 403% was...

If you believe in the Harvest platform like I do then it rapidly becomes clear how crazy these rewards are. The amount of iFARM you can acquire is honestly silly high. With the iFARM/FARM staking yielding a nice healthy 65% right now it can easily pay off big time. Now the inital amount I spent was high and I am not a fan of that however the experience was really neat and the payoff in the last few hours alone has already yielded me over 0.00009 iFARM. With the LFBTC coin being tied to the price of Bitcoin I feel good about the price I had to pay for it all. I could easily this paying huge dividends.

Since Sushiswap is also used I have the LP transaction fees I also can rely on if I needed to for the pairing. Since BAT was a token I did not have enough of to do really anything with this isn't the worst thing I could have done. Especially if iFARM returns to its prior value of $175 then that's double what it is at now and making back what I spent could be a piece of cake!