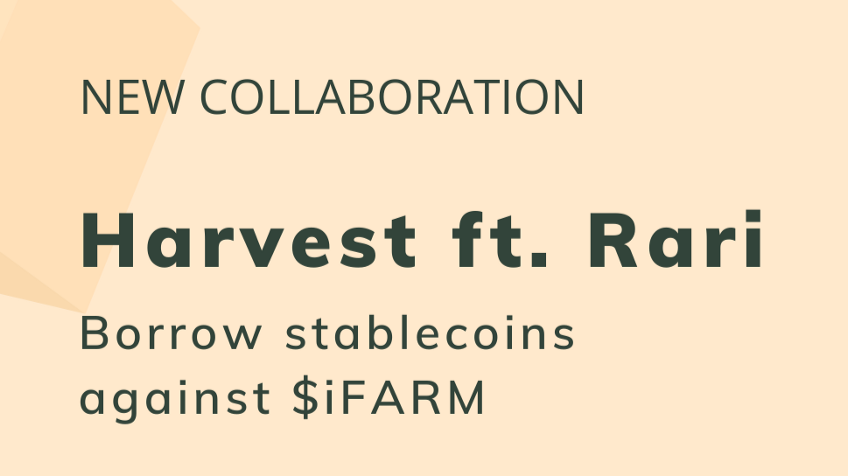 Late last week I saw that a new farm had appeared on the Ethereum Chain of Harvest Finance, FARMStead USDC-24, however, for about a day I could not really find out anything about it. It only had a few thousand dollars deposited in it and was not yielding anything yet so I just kept an eye on it and waited to see what would happen. However, curiosity killed the cat and I ended up hopping onto the Harvest Discord to find out what was up with this.

I am not a huge discord user except for with Banano when I was to shoot the breeze and kill off some time. I also am the first to tell you I do not know about all of the different DeFi projects so I found it a little funny was when I tried to ask about what FARMStead USDC-24 and was told it was the new Fuse pool..... While that might have made sense to some people I personally had no idea what that meant. It took me reading through the logs but I learned that a new partnership was about to be announced with Rari that allows iFARM holders to use iFARM as collateral and borrow popular stablecoins against it!

Now I love this as when FARM was first added as a tipping token people did not like that it did not have a ton of functioning at the time. But boy since its addition Harvest's Dev team has delivered above and beyond what I could have imagined! When iFARM was first launched I was just thrilled to not have to pay gas fees when I staked FARM now it can be used as collateral and the functionality just keeps growing!

To encourage farmers to try out this new added functionality Harvest launched the FARMStead USDC-24 farm where you can earn even more iFARM for adding USDC to Rari USDC. To me, this farm is more or less another stablecoin farm BUT it pays out in iFARM which I find extremely important to note! Stableocin farms on Harvest still pay in FARM which has its pros in being able to sell it quickly and easily on Coinbase but if you are like me and you like staking your FARM for iFARM and watching it grow you wish the stablecoin farms gave you that option to receive iFARM instead of FARM just to save me some ETH on the gas fees!

One last thing to note that caught my attention about this farm. A huge reason why I was confused was when I went to vault details there were no instructions like normal for adding liquidity. Since I am always terrified I am going to mess up adding liquidity I had to really wait until Harvest released their Medium post about the farm which was extremely helpful! If you are going to and was a huge reason why I was confused was I follow the instructions you get from vault details to make sure I go to the correct web addresses and do everything correctly when adding liquidity. For this farm, though I was only able to figure out how to add liquidity once I went to Harvest's Medium and read the article which tells you how to that you can find here!

I am happy to see the continued development and utilization abilities of Harbest and FARM! It is exciting to be a participant and partake in such a new and cutting edge platform like Harvest is. Most importantly I cannot see what they roll out next!