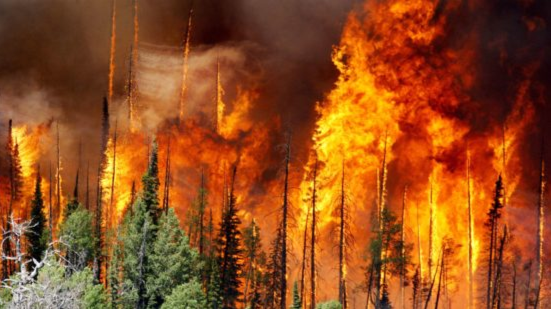 Unusual ways to protect the forest

In addition to the overall control and development of forestry, the problem of fire protection is particularly acute. Although the burning of forests and is considered part of their biological existence, however, there is a certain limit, which requires human intervention.

Numerous forest fires in the summer of 2019 showed the need not only for their timely detection but also for the development of fundamentally new methods of fire fighting, especially in remote areas.

One of the first quite original methods of water delivery can be considered an irrigation system using an airship, which appeared in the United States in the 20s of the XX century. Water was delivered from the nearest reservoir to the watering place by pumping water through the airship. But at that time, technology was not sufficiently developed to have a significant practical application.

Currently, you can find examples of projects on the use of airships for direct fire extinguishing.

The disadvantages of the use of airships to extinguish a forest can be attributed to the complexity of maintenance and vulnerability to heat. But for the prevention of fires, irrigation of suburban areas and nature reserves airships are quite applicable.

The fire-fighting missile is made of environmentally friendly materials, filled with a fire-extinguishing composition, equipped with a dispersing charge and a sensor of the selected parameter. The missile is fired directly on the ground, which makes it more effective to extinguish the fire. When the detonator is triggered in the rocket, the package with the foaming agent breaks, which, mixing with water, fills the barrel. The reaction of the reagents of foam that covers the center of combustion, thereby extinguishing a fire and inhibiting combustion. The directed blow is made by knocking down of a flame, volume penetrating cooling, inhibition, localization and full suppression of fire in the area of 150-250 sq. m.

Advanced cargo unmanned delivery vehicles should reduce the cost and simplify the use of fire-fighting equipment.

Wave and beam technologies can be referred to as promising ones.

The possibility of a fundamentally new weather control technology is shown by studies of filamentation of ultra-short TW-class lasers (high energy intensity). Emerging laser filaments (filaments) are self-supporting light structures with a diameter of 0.1-1 mm, a length of more than a hundred meters and create a low-density plasma on their way.

Due to the high radiation intensity (10^13 -10^14 W cm^-2), the filaments also change the chemical composition of the air through photoionization and photodissociation of molecules and aerosols present in the laser path. These unique properties have been used to study the ability to modulate some key atmospheric processes such as lightning, water vapor condensation, fog formation and dispersion, and light scattering (albedo) from high-altitude clouds to control radiation exposure. The mechanisms underlying the detected phenomena suggest the applicability of new nonlinear photonic catalysts for real weather control.

- Airships giants will be firefighters and gardeners
http://www.membrana.ru/particle/2476

- System for irrigation of agricultural land by airship
https://findpatent.ru/patent/262/2622176.html

- Drones the future of firefighting?
http://robotrends.ru/pub/1725/bla---budushee-pozharotusheniya

"Century of science" in Russian

Science news and application of scientific achievements in everyday life. And some dreams.