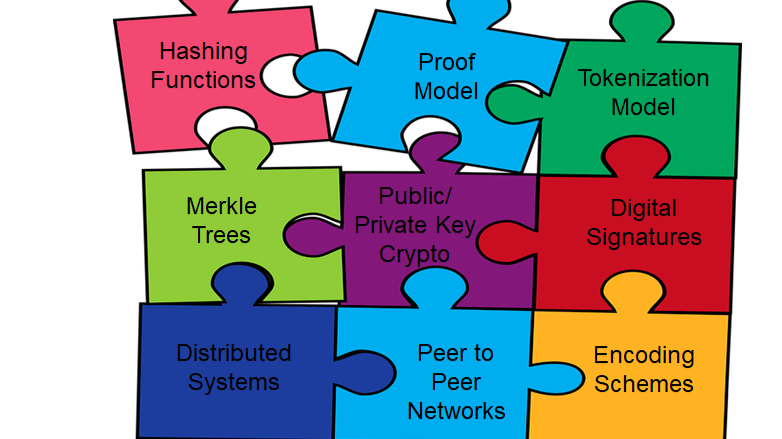 CBDC , Blockchain and Cutting Through the Nonsense

Right off the top, I want to use this as a stage-setting article to introduce several topics related to Central Bank Digital Currencies (CBDCs) that help to set up a series of articles in which I plan to deep dive into a various technical and non-technical design issues that CBDC creators need to consider.  While this series may not state a specific or desired design state for a CBDC, it should give a deeper analysis of the implications of certain decisions and perhaps shed some light on better or worse combinations of features.

To kick off this article, I want to point out a number of areas of confusion in the global blockchain industry that relate to terms and vocabulary for CBDC and blockchain. The goal is to establish a reference point and common understanding for how I am using common CBDC terms.  Getting to a common understanding of the terminology in the blockchain/distributed ledger space has been a challenge, as is demonstrated by the efforts within ISO Technical Committee 307, where their initial task was to set out the definitions of terminology being used in distributed ledger and blockchain.  To that end, I will try to lean on the definitions agreed to in ISO 22739 Blockchain Terminology (Vocabulary) even though many of the terms as presented in that standard are still vague.

Taking a step back

First off, when it comes to blockchain and how it was originally presented by Satoshi in the Bitcoin whitepaper, I always ask people to take a step back from the generic term of blockchain and observe that there is nothing new in blockchain or distributed ledger.  It is a novel combination of a variety of pre-existing technologies that results in an immutable chain of events or transactions. That is all.  When I teach blockchain, I describe blockchain as being a bit like a puzzle of components like this: 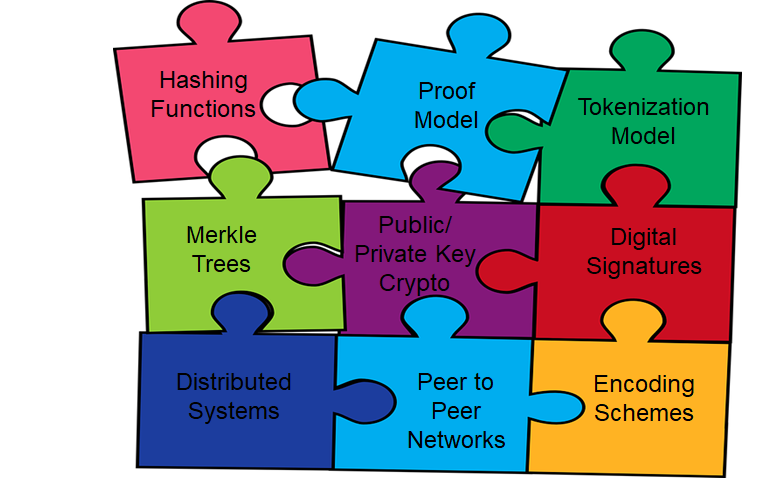 In this picture, we can choose to swap some of the pieces for other technologies and, for some of the pieces, such as cryptography, we already have a variety of choices. We can also choose to remove pieces or add additional pieces as necessary for a specific design specification.  So, there is a lot of flexibility for blockchain technologists that can get lost when the focus is on specific implementations such as Bitcoin.

This is one area that creates a lot of confusion within the industry.  Is it blockchain? Is it a distributed ledger? Is it both? Are they the same? The answers depend on your perspective.  If we look to the ISO 22739 vocabulary on this topic we see the following definitions:

Blockchain
A distributed ledger with confirmed blocks organized in an append-only, sequential chain using cryptographic links.
Note: blockchains are designed to be tamper-resistant and to create final, definitive and immutable ledger records.

Distributed Ledger
A ledger that is shared across a set of nodes and synchronized between the nodes using a consensus mechanism.
Note: A distributed ledger is designed to be tamper-resistant, append-only and immutable containing confirmed and validated transactions.

Based on these definitions, it could easily be assumed that they are essentially the same thing.  That is essentially true, but within the blockchain industry, we tend to make a deeper distinction between them.  When we speak of ‘Blockchain’ we are generally referring to the decentralized operational model like Bitcoin or Ethereum and when we refer to ‘Distributed Ledger’ technology, we usually refer to the controlled, permissioned node model of a solution like Hyperledger.

In the ISO definitions, it would appear that you can almost use the terms interchangeably and unfortunately many do, but in my articles, I use the decentralized vs permissioned distinction described above.

Coins are meant to be to the base value of a cryptocurrency. For example, 1 Satoshi in Bitcoin is considered to be a coin.  This has equivalent meanings across most cryptocurrencies.  But moving ‘coins’ can be cumbersome when the value of the transaction could be hundreds or thousands of 1 Satoshi coins.  For this, we usually use the word ‘token’ to represent any volume of coins within a cryptocurrency.

While the creation, combination and splitting of coin values within tokens in a cryptocurrency is technically ‘tokenization’, it is tokenization in its simplest form and may not be applicable or usable more broadly for anything beyond value in a currency.  We will be digging into this topic in future articles in this series, but to put it simply – while you may be able to tokenize other assets such as art, real estate or automobiles in the same way that you tokenize value in a cryptocurrency, you lose a lot of the potential and the granularity of tokenization by using this basic model for tokenizing cryptocurrencies. Processes and methods for tokenization vary greatly and this area needs to be considered carefully in digital currency applications while being open to enabling the digitization of other national infrastructures where currency and value both play a role.

Another area of intense debate in Digital Currency circles is whether or not you actually need a blockchain or distributed ledger model to deliver a successful CBDC.  The key factor in establishing a digital currency is being able to gain trust in the use and operation of the currency as a mechanism for domestic and international commerce. Traditional fiat currencies lose some of their trustworthiness when coins or bills are easily counterfeited.  The ability to deliver an immutable record of transactions and confirmed ownership of value within the economy is essential to building trust with the users of digital currency.

Blockchain is not necessarily the only way to create and maintain an immutable record, but it is proven at scale whereas other techniques are going to be more speculative at this stage.  Some European Union members have been working on a proposal for a purely cryptographic digital currency model, but it will take time and practical testing to prove that it is a viable alternative to a distributed ledger or blockchain solution.

If you are doubting the need for immutability as a requirement, then I would suggest using a bank account as an example to explain why this is a critical feature of digital currency.  Accounts have been using immutable ledger practices for centuries, and there has been a long history of mistakes and errors made in accounting, but accounting always has a method for correcting those mistakes which don’t include using strike-through or an eraser. Everything has to be a transaction in the ledger including the remedy to an error.

Is a digital currency a cryptocurrency?  In most cases, yes.  Again, this is going to come down to opinions and varying definitions of what makes a digital currency digital.  In some circles, people have argued that the fact that many sophisticated economies can move vast sums of money between a wide range of parties digitally without the need for physical currencies means that they have a digital currency.  While it is true that we have the ability to move sums of money digitally, this does not actually make the currency digital.  Technically all of that currency that is flying around within our banking systems does exist as physical currency somewhere and is accounted for by a central bank.

In conclusion to this article, I would like you to keep in mind that this is just the beginning of this series, and the details above are designed to act as a common reference point to drive the more detailed conversations that are coming.  With that said, I’m interested in your thoughts on these topics.  Where do you see the vocabulary and how can we build broader understandings in this topic so that it becomes a common language amongst the different players in the ecosystem?  Right now, the disconnects just on terminology are creating bigger disconnects between CBDCs and complicate interoperability for international commerce which continues to be an afterthought for many of the designs that have a very domestic focus.