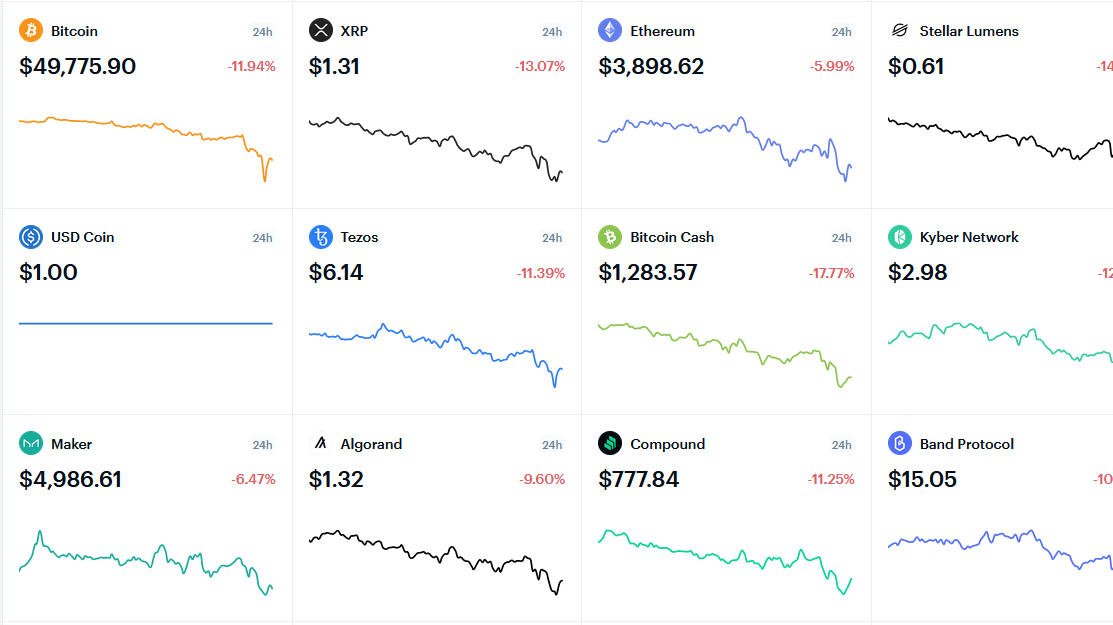 Bitcoin Drops Hard on Musk's Announcement - Drags Down (Almost) Everyone Else

By YankeeKitsune | Building Equity with Crypto | 13 May 2021

If you're feeling a sense of deja vu when looking at those price cards above, it's understandable. Around three weeks ago we witnessed a similar crypto market crash where Bitcoin lead just about all major coins in a sharp downward dive, with tonight's drop following a similar pattern:

Now last time we were looking at multiple causes for the sudden drop, from drops in traditional markets to nations banning or preparing to regulate cryptos to mining problems, there were a number of factors piling on to trigger a massive sell off. This time around it appears that the cause of a major selloff is a bit simpler: 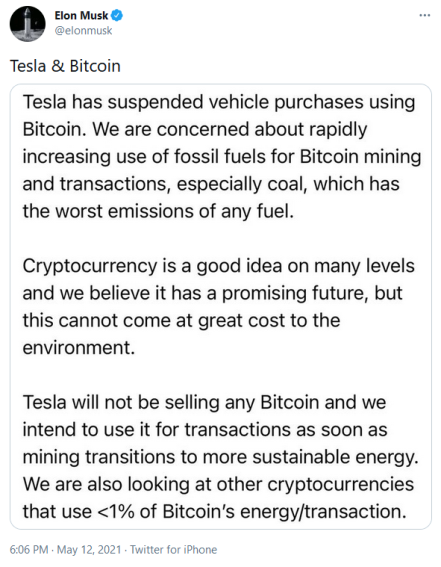 Yep, after apparently kicking his favorite DOGE during his SNL appearance over the weekend, Elon Musk has turned his flamethrowers on Bitcoin and the heavy power usage needed to run its network. While more attention has been paid the how much energy goes into mining a block recently in the mainstream press, its not like this has been some major secret that a technophile like Musk wouldn't have known when Tesla made its purchase of $1.5 billion worth of BTC in January.

The mention of coal may be aimed at miners in China, where around 75% of all BTC is mined due to cheaper electricity and coal plants are still in significant use but research into the subject shows that 75% of the power used to mine bitcoin is renewable.  Tesla has recently had a bad time with their Chinese division and it's an open question if this might be Elon's way of striking out and/or if this might cause him more problems in the People's Republic.

Alternate platforms like Algorand and Tezos have already stepped up to offer their networks as carbon neutral or negative options, and I wouldn't be surprised if other projects like Chia try and jump into the mix. This has not helped their prices however, as both are also down significantly at the time of this post.

Also down is Ampleforth, which I talked about during the last major drop as a possible counter trade or hedge against Bitcoin. It seems that theory may be off base as AMPL has also dropped by almost 15% tonight, thought the not-stablecoin had already been on a sharp downward trajectory for the past few days so it's entirely possible this recent announcement just kicked it a bit further down towards its' lower threshold line.

So what is up? Surprisingly, DeFi tokens Aave and Curve DAO are seeing double digit gains at the moment while Polkadot's "cousin" Kusama is up 9%. All three dropped along with the rest of the crypto world at around 8 PM EST but have managed to recover and go positive on they day. Why exactly this has happened it up for debate but considering the relative bounces other coins are seeing its possible these three had major buyers just waiting for a drop to buy up heavy quantities. With trading volumes jumping 300%-400% over the previous 24 hours this seems like a reasonable hypothesis.

The market does seem to be recovering 2 hours after this latest shock, but with the struggles BTC has seen in recovering back to $60K the last few weeks we may be in for more tests of support than resistance.

Discussing different services and methods the average holder can use to increase the value and amount of the cryptocurrency assets. All posts are educational in nature on how services and strategies work and do not represent specific financial advice. You should conduct your own research and/or talk with a financial planner before following up on any information given here.