Binance Coin takes off towards the $ 40. 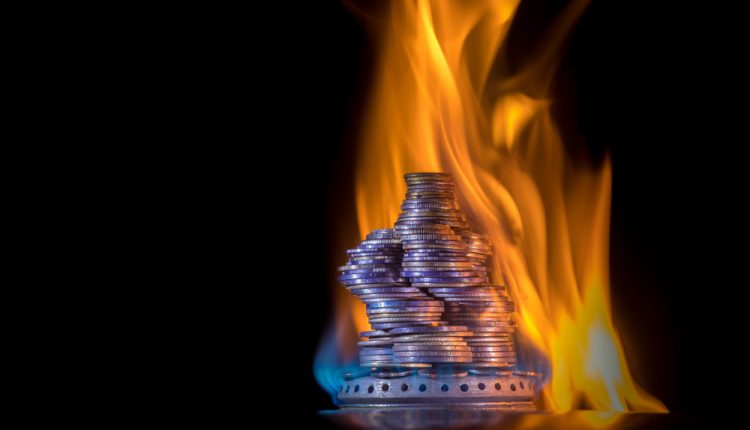 Binance Coin takes off towards the $ 40.

The crypto market has been intense this week and even though Bitcoin has not yet exceeded the five-digit level, it maintains a lateral movement of prices around nine thousand and keeps the market at optimal average capitalization levels at $ 288 billion. of dollars.

One of the altcoins that has managed to take off in conjunction with Bitcoin is the token of the largest trading platform of the moment, Binance Coin which maintains an irreversible upward trend so far, generating new lows ever higher, heading for the barrier of forty.

In our last post related to this asset we had warned of the thrust that BNB would have despite its bearish moment at that time. Now, time has given us the reason.

At the time of writing, the BNB token presents a spot price of $ 36.41 with a growth of + 2.67% in the last 24 hours that has allowed it to remain in the seventh box of the general classification of the crypto market with its superior marketcap at $ 5.13 M dollars.

In the short term, the outlook for BNB is encouraging. A strong flag is projected to levels of R1 @ $ 37.98 for the next few days with the possibility of accelerating this course if BTC keeps its promise to break the 10k barrier for the weekend, of which the BNB \ BTC pair in Binance is responsible for 23 percent of the market share of the token. 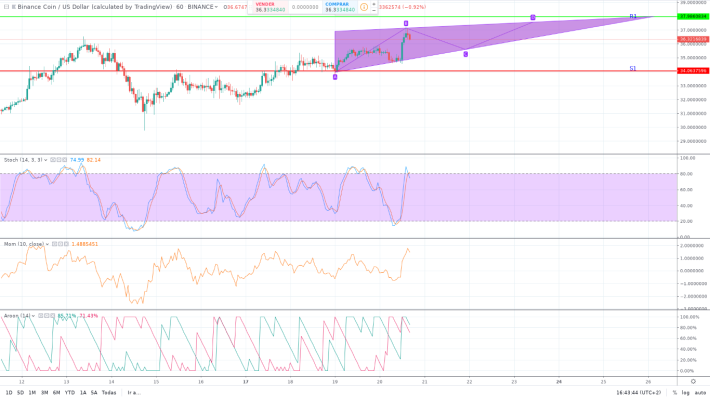 In addition BNB according to the graph of 1H in Binance, shows the development of its second wave, a bit corrective to take momentum to its third definitive wave of levels of R1. His firm support remains at levels of S1 @ $ 34.06.

The Stochastic indicator has a strong wave that has ended in overbought levels, due to the bullish sentiment of the token. Its level of 80 presents a slight downward crossing, which coincides with the development of the second wave of Elliot projected.

The MOM indicator is in bullish levels for the token, with a limit close to 2.00 that was slightly grazed by the price rise that pushes BNB.

Aroon, for its part, points out the moment of correction of prices that begins to take shape in BNB, but also indicates that the upward trend will be maintained in the short term by sending its bearish indicator to the bottom of the chart.

With regard to the medium-term outlook, the BNB token presents a strong upward trend that many saw recently interrupted by the fearful moment that some unbelievers experienced about BNB's ability to recover and re-boost its prices to record highs again.

His career towards the peak started in December 2018 when the token came to be worth only $ 5 has not stopped and proof of this is the profit of x7 that BNB already has in just one semester, an estimated monthly return of + 1.16% It has remained constant throughout these six months.

Currently the price struggles to stay in the price band between R1-S1 at close levels of $ 45 by the middle of next Q3 2019. Elliot projects this scenario by walking between levels of $ 33 and maximums of $ 44,16 in the remaining two waves by be fulfilled for BNB. 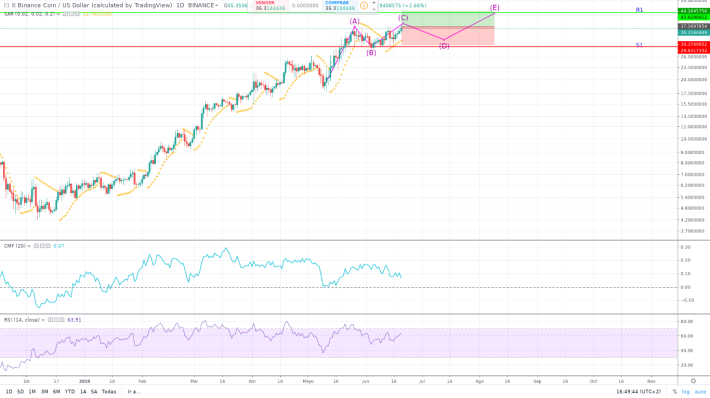 The Parabolic SAR indicator projects a prolonged bullish sentiment for the rest of Q2 2019 with its orange points drawn under the BNB candle chart.

CMF for its part tells us that the capital outflow of the BNB ecosystem is evident at this time when the price begins to correct itself by the withdrawal of profits from investors seeking to oxygenate the market for future highs in the medium term.

RSI signals the bullish moment of the token, with strong pressure on the generalized purchase for BNB as it approaches overbought levels, close to RSI @ 70.

Binance Coin is the official cryptocurrency of the cryptoexchange or Binance exchange house, whose name is an acronym composed of the words "binary" and "finance".

Particularly present in the Chinese and Asian market, the Exchange that gives life and welcomes Binance Coin, not only supports trading with a large number of cryptocurrencies, but also encourages the use of its own token offering discounts for 4 years to users that operate with Binance coins.

Thus the currency is born basically to support transactions within Binance's own platform. In this line, the developers of the Exchange try to increase the importance of their token through projects related to the Blockchain that can be financed by the users with Binance coins. The fundamental idea is to use the Binance tokens as a Gas within their own system, as in the case of the Ethereum or Neo cryptocurrencies.

Binance Coin has experienced continuous growth since its inception, ranking among the 10 best valued cryptocurrencies by its users and around 28th place in the ranking of coins in order of capitalization in the markets.

Regarding the reasons for its constant upward trend, there is a strong increase in the number of users and investors interested in BNB, especially because it is easy to carry out transactions with this token thanks to its compatibility with different digital systems and currencies.

On the other hand, the fact of having the support and resources of a very powerful cryptoexchange and that especially bid for its use, make Binance into something more complex than a simple cryptocurrency.

Binance recently announced the creation of tokens linked to other cryptocurrencies such as Bitcoin, instead of anchoring them to stablecoins. The strategy is to be able to quote them in their decentralized exchange and encourage the increase in the volume of operations in this alternative platform. 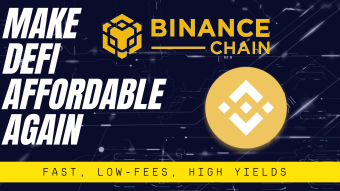