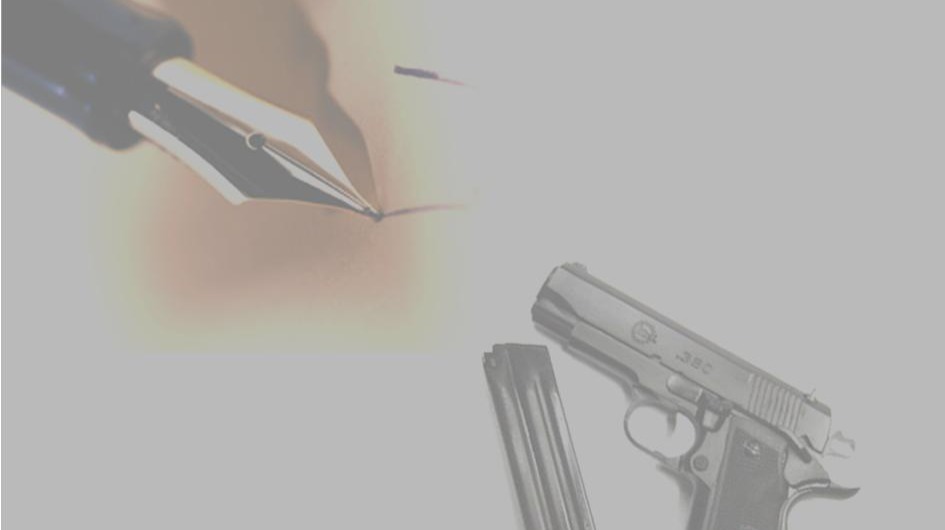 The pen and the pistol

The MontBlanc gold fountain pen rests comfortably on the desk, while carefully observing the study undertaken by the enlightened man. Aware of his actions, the judge takes pains to prepare yet another one among so many judgments. The toga lined with laundry steam is hanging from the hatter in a corner of the room and ready to enter the scene.

He dresses before the blindfolded goddess Thémis who rests on a marble pedestal built especially for the icon. In the mirror, he harmonizes the hair by sliding the comb through the gray strands. Between visas, reports and case discussions culminate in essential elements for the drafting of judgments. The pen manifests itself and spills the ink on the paper in rubrics drawn by the serene man, castellated by the distinguished toga. In any case, its blue outline is not the end of a process. There are ways out of the convicted by means of appeals. Satisfied in their routines, the pen and the Judge fulfill their designs.

Not so far away, the dark man turns from side to side, but he is overcome by insomnia. Still warm, the .45 Magnum pistol leaning on the chair that serves as a nightstand beside the bed shares a tight space with the black wool hood and loaded magazine. In nightmares the boy reviews his assaults, kidnappings and orders for burning files. Between daydreams, Magnum unleashes its steel and gunpowder capsules under the crosshairs and firing of the hooded, tense and inaccurate man. Among targets, many errors resulting from random bullets addressed to innocents who were not in their execution plan. For these, they only have resources in the divine plan. Hesitantly, Magnum is still attracted by the red juice that spreads from each victim shot by the barbarian. Duty of the day accomplished, the judge says goodbye to his professional companions and returns home.

On the way, while driving his imported and armored car, he mentally reviews his decisions. The rapporteur feels at peace with himself, since presiding over the trials, he recognizes the parity of interpretation in the votes of the judges who accompanied him on the agenda of the day. He stops. In front of the electronic gate of your mansion, activate the remote control to lift it. Suddenly, a motorcycle turns the block at high speed and advances towards him bringing two individuals. The driver is wearing a helmet. The dark man is on the back and covers his face with a black hood. Gun in hand, the bikers prepare the trap. They appear on the left side of the vehicle. The barbarian invests blindly by unloading his weapon against the target previously ordered by a highly dangerous bandit who was tried and convicted by the judge to serve his sentence in a closed regime in a maximum security penitentiary. Make several shots at the door and glass of the car where the driver is. The 50 mm thick laminated glass and polycarbonate blend resists. Enough time for a ready reaction from the enlightened man who jumps into the passenger seat, opens the door and gets out. Pull out your Glock 17 pistol in 19mm caliber with laser pointer. Using the car itself as a shield, he quickly drags himself to the rear side and in a certain movement he rises and fires eight shots against the marginals. Two bullets hit the motorcycle's fuel tank. It explodes.

Between the shots taken and the throwbacks from the outlaws, a bullet against the judge's chest causes him to collapse. Six long, terrifying minutes pass. The wife and two teenage children go outside and panic when they encounter the illuminated man lying motionless in front of the house where they live. The siren is heard. The first police car arrives. Residents leave their homes and crowd the place. Three bodies remain stretched out, inert. Two of them on the gray asphalt.

There is fire and a lot of black smoke. The other is stretched out with his back on the icy marble tiles on the sidewalk. The two policemen get out of the car and run. One of them activates the extinguisher against the fire. Restrained from the flames, he closely observes the bikers and notices six large bore holes in the pools of blood. Two against the chest of the man in the helmet and four against the disfigured face of the man in the hood.

The .40 Magnum, still warm, rests inert next to the two partially incinerated and lifeless bodies. The other policeman finds the judge lying with his back propped on the floor. The wife screams. She calls for help. The eldest son in a momentary act of insanity runs where the two bikers are. The policeman notices his charge and stops him. Sirens deafen the place. Two more police vehicles and a fire brigade rescue patrol arrive simultaneously. Police officers provide a cordon for the area. The paramedic kneels to listen to the judge's chest. The white linen shirt is stained. "He breathes," admits the doctor.
In the pocket of his shirt on the left side of the illuminated man's chest, the blue blood of the pen melts into the red ink that drips sparingly. From this fusion the purple blood is reborn.