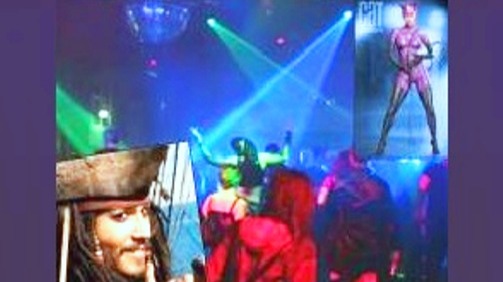 By hermesmensageiro | Blind Consciousness | 6 May 2021

Megalok's Red Zone. Jack Sparrow, code name given by the cyberman friends, given his similar way of dressing to the protagonist character of Pirates of the Caribbean, decides to uninvited, to step into foreign territory. He promises his friends to enter the clubbers' temple alone and from there, go out with a girl. It guarantees to record everything on your digital camera. The ballad, the motel, the victim and her intimate predicates.

His friends, on the other hand, promise to be around two in the morning at the exit door of the place indicated by him.

Friday. In front of the mirror, Jack adapts the piercings. It proceeds to metamorphosis. He screws one of them on the tip of his tongue, two on his left ear and one on the side of his nose. Knitted head scarf and pirate prints from the Caribbean give it a cynical and eccentric personality.

Making an impact is the goal, to be noticed, your prize. Vinyl pants glued to the body, indigo blue baby-look T-shirt and tube model sneakers, anti-impact, with a fitted look, he leaves for the best clubber-dance in town. He takes a subway train and proceeds to the Green zone. He gets off at the orange station.

Along the way, now on foot, he notices astonishment in the wide eyes of the older people who pass by him. Standing at an intersection and waiting for the pedestrian traffic light to open, he feels a slight warm gust of wind that shakes the trinkets of his forehead for an instant.

Something makes you imagine that such warm breath would have been caused by the blows of a winged being. Was it, like a breeze, a sign of flight from the ancestral character Gregório Samsa, terrified to see him dressed like that? Not wanting to repeat that strange sensation, he said to himself:
A colored tablet raises your state of consciousness. Ingest your throat. Like Neo in the Matrix and his red pill, he transcends the boundaries of time and space.
‘I’m going to burn a candle for the saint of Kafka.’

Enter a bar and order a marlboro. He pulls out a cigarette, takes it to his mouth, lights it and pulls the first drink with the air of a brave young man from the TV commercial. Still at the bar and having a good perspective of the disco, he looks at his watch and realizes that it's time to get in:

'The ballad is booming'.

Once again he crosses the street, now from the bar to the famous lounge. Stops in front of the Gotham City Clubber window, formerly a huge shed used by the clothing industry. Are sumptuous entrance gates kept under close watch by farm lions or are they bronze tigers? At the box office, he pays a third of his salary, a symbolic price for entering a world of false prestige and an exciting night of pleasure. He passes Hitman's thorough search and his x-ray eyes. With a frown he hears the decree:

'Firmness, bro. It's clean and cleared. You can pass. ’- Get in the big magic mushroom. The delirious play of lights and the energy of electronic techno, trance, house, drum and bass music in nuances of overdubs calls for numbness for the soul. Captain Boomerang, the host, comes over and welcomes you. A colored tablet raises your state of consciousness. Ingest your throat. Like Neo in the Matrix and his red pill, he transcends the boundaries of time and space. For him, the party is just beginning. He leans against the armored carrara-topped counter and asks the barman for a red bull. Swallow in smooth sips. The combined effect between ecstasy and energy added to the stunning lights and sounds propels you to the dance floor:

‘Now I’m ready to fly.’ - In a trance state, move and move all over. Sometimes in slow, robotic movements, at other times, like a peacock, which in a single stroke, stretches its colorful plume. Right now, Jack Sparrow is seized by a spasm when he runs into Catwoman.

Both are attracted by the avant-garde style. Without delay, the bodies, the mouths, the sensations are brought together. The world stops. He, the captain of the seas, the brigand with the hearts of others, latches on to the seductive and dominating feline.

Poor captain. What is the use of the pixote and rigid sword, in front of the elongated whip that the swindler, a rubber cat, gives him by skinning and burning his meat, as he induces him to play skipping rope. The strange trick of the Catwoman used to seduce Jack Sparrow attracts other men who, like the captain of the seas, also look for their great treasure, the H they lack. Many of them realize that the captain is an outsider. Nor do they doubt that Catwoman belongs to everyone, but also to no one.

'Who is this madman in our piece, fogging up our Cat Woman?' - raises the high-pitched voice, the Machiavellian prince Penguin, calling the attention of Nightwing. This warns Batman that jealously tells his inseparable friend Robin that he will not let go. Robin, in turn, puts pepper in his companion's tormented cache. Batman rebels.

He brings together the group that includes Terminator, Gunman and Nightwing; yes, that one at the traffic light that crossed Sparrow's path in a wild flight when he was on his way to Gotham City. Even Charade, who hadn't been there for a while, said she wanted to deal with the main character of the Black Pearl curse.

Two o'clock in the morning on Saturday. Jack Sparrow observes the strange movement around him. He knows he is at risk. He pulls out his cell phone and tries to contact the astute Captain Barbossa. Device out of area. He tries another number. This time, he calls the legendary and scary Davy Jones, lord of the depths.

He answers his cell phone, but says he can't come because he is wrecked in depression after losing his beloved to some bastard. When he turns off his cell phone, he realizes that Catwoman is missing.

He looks to the sides and is surprised by the catwalk hitting Batgirl between kisses and brushing against bodies. Disillusioned, he decides to leave.

Two-fifteen. He crosses the Gotham City exit gates. Nothing seemingly strange. He walks towards a taxi stand.

When you turn a corner you come across Nightwing that advances on him in a single jump, hitting his face with both heels.

The captain collapses at the curb of the gutter. He begins the volley of blows. Exterminator approaches in firm steps and gives him a powerful kick in the head. Gunfighter doesn't let up, runs and jumps with both feet on the defenseless's genitals. Robin steps and squeezes his face against the ground.

Riddler does not attack him, but he amuses himself while encouraging Gotham City cronies to slaughter until he decimates the fake immortal Pirate of the Caribbean.