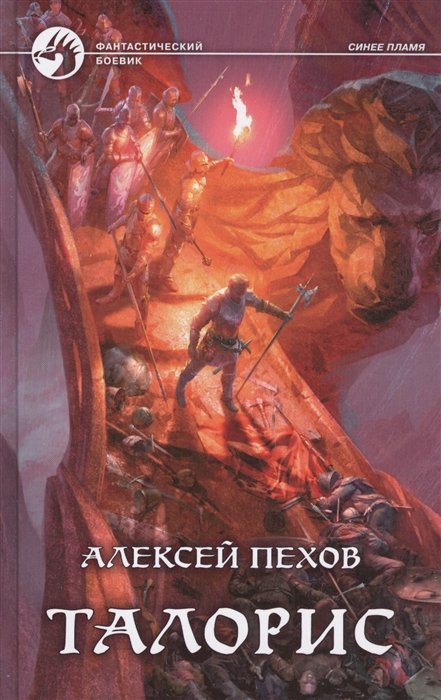 I read the last chapter of the new book and decided to record my impressions of it. The authors of the book are Pekhov Aleksey and Bychkova Elena (they are spouses, permanent co-authors), the series “Blue Flame”, the title of the book “Taloris”, the genre “fantasy”.

The book came out literally in days, and was bought up literally like hot cakes at a school break. And it's worth it, the work was a success. I will not retell the whole story, so as not to disrupt the interest of potential readers and not to disappoint the fans with the disclosure of intrigue. I can only say that the author again gave vent to the activity of the professional killer Laviani, which many love and remember from previous books in the series. I am glad that judging by the end of the novel there will be a sequel, it begs itself.

The Blue Flame series is generally very successful for Pekhov, she has many fans. As always, the author masterfully prescribes scenes of medieval battles, shows the morals of kings and warriors, city guards and robbers ... brilliance and poverty, feasts and hunger, blood and sand and fse is such. Demons in the image of people and people in the images of demons.
It turned out to be very exciting and informative reading, if you produce the local intrigues into our reality. Everything is described by a beautiful, juicy, figurative language, very, very believable if such a word can be applied to the genre of "fantasy".
In this book there were many female experiences (the influence of the goby) that I flipped through safely. Not that they are sad, no, on the contrary, they are written in a beautiful language, interspersed with all kinds of fabrics, incense, and phenomena. harem passions, drum by the pool ... I just don’t like that. Probably the critical reviews were left by those readers who did not leaf through? Reproaches for the protractedness of the work have already been heard, there are claims to the series of “walked, killed, wounded, treated, walked again, killed ...” Well, there is no taste and color of the owner, as they say.

Personally, I liked the book, the author Alexei Pekhov generally really like. I consider him the best modern Russian author of the fantasy genre. No wonder his works have been translated into many European languages, and Pekhov’s various competitive regalia are obviously deserved by him.