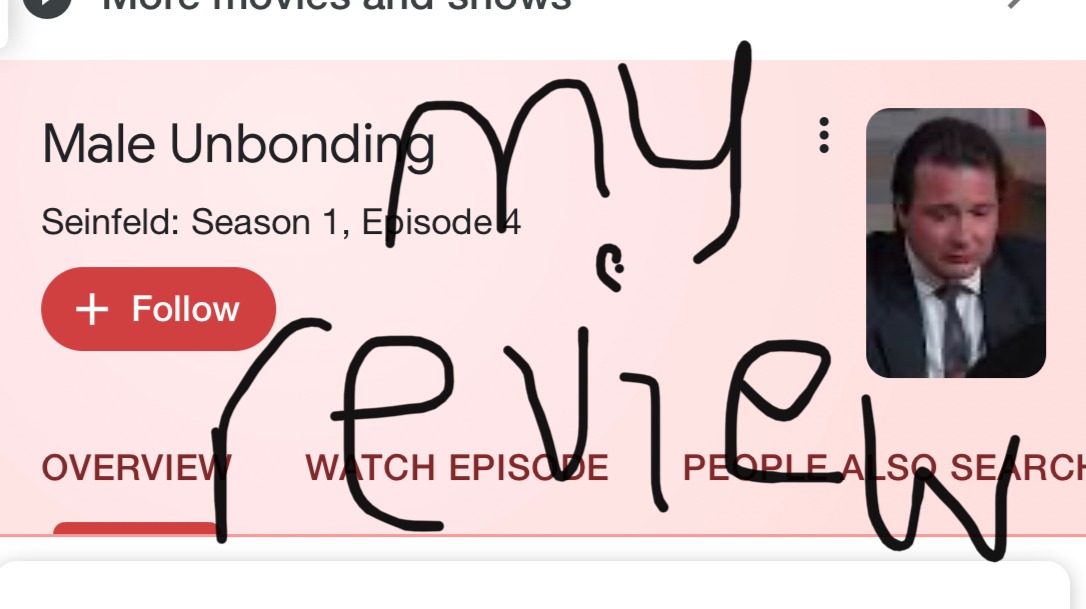 My Review of Seinfeld - Season 1 Episode 4

The opening stand up talks about "Men and their tools"  When ever a guy is working - men will gather but they dont help the guy working, they just stand around talking and giving their opinions about the man working.

George and Jerry are talking and George admits that he told a woman that he liked her.  Now he regrets it because he thinks he over stepped.  George begins to panic because of floss in his pocket - mint - and the evolution of neurotic George begins.

Kramer is on the phone - "Of course they have a cure for cancer"  The first mention of Kramerica Industries.  Kramer has a business idea where you make your own pizza.  You kneed the dough, flip the dough, put on your toppings and cook the pizza.  Both George and Jerry think it is a bad idea.  I know of a pizza chain called Papa Murphy, where you get a uncooked pizza, go home and cook the pizza in your oven.  Pretty close.

Jerry's standup adds more information to the following scene.  "How do you break up with a guy friend?"

Jerry is on the phone with a childhood friend named Joel.  Not really friends but they agree to meet.  At the diner, Joel and Jerry and talking and Joel is acting like a jerk.  Jerry is annoyed and attempts to break up with him.  Joel starts to cry and Jerry recends the breakup - if fact, he offers Joel basketball tickets that he promised George.  Knicks basketball.  The 1990's was the most recent timeframe that Knick basketball was good.

Jerry and George are at a bank and George confirms that the relationship is over.  The woman tells George that she wants to end it and George ends up sitting through the lunch in order to finish his sandwich.

One of the best things to come out of this episode is the excuse rolladex.  Now the concept of a rolladex is old and unimportant because unless you are old enough to know what a rolladex is - you know what an answering machine and no caller ID is all about.  Ultimately it is a list of excuses that is kept close in order to use to avoid going to a function or out with someone.  Choir practice, organ donor information.  What are the best excuses?  I think a staple is the stomach bug, diarrhea, family in town.  I am currently dealing with someone at work whose brother has died probably 5 times.

The personalities are being established.  George is entering neurotic tendencies.  Kramer is unlocking the idea machine.  Elaine is stable so far.  Jerry is constantly getting into situations that move the story forward.