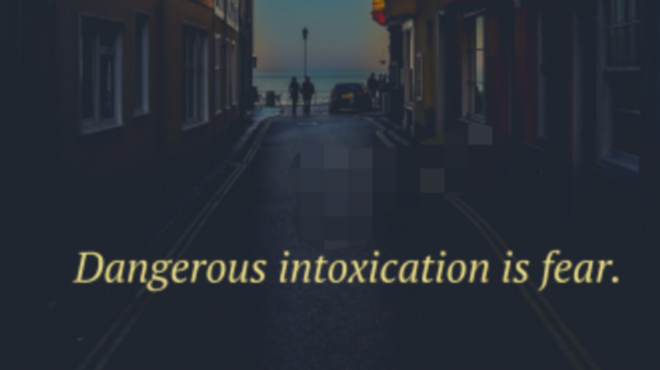 The most dangerous intoxication is fear. In 2020 fear has been marketed and advertised well. And we were told ,there is here fear everywhere ; fear of death, fear of poverty, etc., But this fear is nothing new.

⚫ Was there no fear of death before ❓

⚫ Was there no fear of poverty before ❓

Then sometimes there's fear of becoming a missing person, so so we have variety of fear . We were not leading great lives already , for example , in which year fear our younger generation is spending their lives?

They ( have a fear that they) won't get a job; this year makes them polish shoes.

A Young guy with new hopes , wishes and dreams towards life and they all are rolled under fear.

Undoubtedly , we are Muslims this is a belief that Allah is a guarantor of our daily bread but this fact is not internalized in US. if it was internalized then

⚫would we be doing this buttering ?

⚫would we give importance to the elite❓

The one with our power, resources and wealth; they became Muslims after crossing their 50s because after 50 they ask Allah for forgiveness .After seeking for forgiveness , they start understanding religion. All the dacoits , gangsters , womanizers , murderers, alcoholics , thieves , terrorist, interest earners, bibers , sexual abusers and all such criminals in their old age they would be like no one be more fire pious then them and with all the confidence they proclaim that no doubt we spend all or adulthood in sins but now we have repented for our sins. So , this is not how one seeks for forgiveness.

⚫ how can it be accepted after destroying so many innocent lives❓

It's because of fear; fear of death as they know after the age of 60 now the next age is death. Like would be soon over for them so, now how can they live. I can bet on it that if science invents some kind of a vaccine which helps in increasing the age of 200 years , you would see that no one is going to repent at the age of 60 neither will they offer prayers. Rather they take it for granted and think that for now they will continue with the wrongful life and also think that they can still destroy the people's lives. They would have mind set that when they will reach at the age of 180 then they can repent for their sins. They think that after repenting they will carry the prayer mat, will get the spot of sajood on her forehead and will be called 'Haji Sb' (the pious man).

No matter if he had offered the Hajj (Islamic pilgrimage) with all means but yet they all are "hajis". And society is scooled to not criticize then rather to give them respect. If we are giving someone respect this is because of fear and if we are not respecting someone that this is also because of fear that one doesn't know no if the other person is a Muslim or not ; so it's all based on fear.

Likewise our youth is is in constant fear of failure and this fear exists because when we are try for something then the people around us are the ones to pull us down. On one hand we tell the stories which say,

"Once there was a king whose saw an ant trying to climb the wall and it was unable to do so but it kept trying and around after 30 attempts it finally was able to climb up and the king watching the ant was inspired because of it so fought and conquered a war."

So , after telling the story to the people ; incase they fail we say , "See , we told you not to do this, you can't do that "

So, we just discourage people , fear in forced on us instead of encouragement. This fear has increased this much that once the daughter is born , we cry (God forbid). On one hand we call it Allah's gift but it actuality we take it as Allah's warth .So , if we cry on daughter's birth and when people around console , the reply is not it's not about the daughter's it's about the fear for her fate. When She is an adult, then we tell her all her life that she should die at her husband's place and only her dead body should leave from that house meaning she should never come back alive(to her parents house after a fight with her husband).

⚫ Haven't you seen the different news that mother-in-law put daughter-in-law on fire, in laws having their daughter in-laws , someone threw kerosene oil or they divorced the woman on birth of a daughter.

The other day this news came that a woman kidnapped a newborn baby of someone and left her own daughter there (at hospital) because she was living under his fear that her husband would divorce her if (she is unable to provide a son) and why the husband is afraid of a daughter's birth as I said earlier we have this stereotype that it's not the daughter we are afraid of it's her fate.

In our society there is not just this one pandemic which we call Corona; it should be placed on some other number as before this, we have pandemics...like; lust, greed, unjustness, selfishness and self- centeredness. These pandemics could have been eradicated with unity like we want to eliminate Corona and we have United for that we will have to be United against other pandemics too.

In 2020 we learned the lesson of unity and humanity.

Unity and humanity, because once the fear of death surrounded us, everyone started taking care of others. Although fear was there already but it was advertised now , so this give us the lesson of unity and humanity. That wasn't based on colour, creed or religion this was the the most interesting thing that no one said that if someone from lower caste is infected with Corona then he/ she doesn't deserve a cure or its not important. L

It was important and dangerous for everyone equally.

I pray that this pandemic ends soon but for now the end of this pandemic , these emotions of care and unity shouldn't be eliminated .

I am a content writer, can write articles about life, motivation, society issues