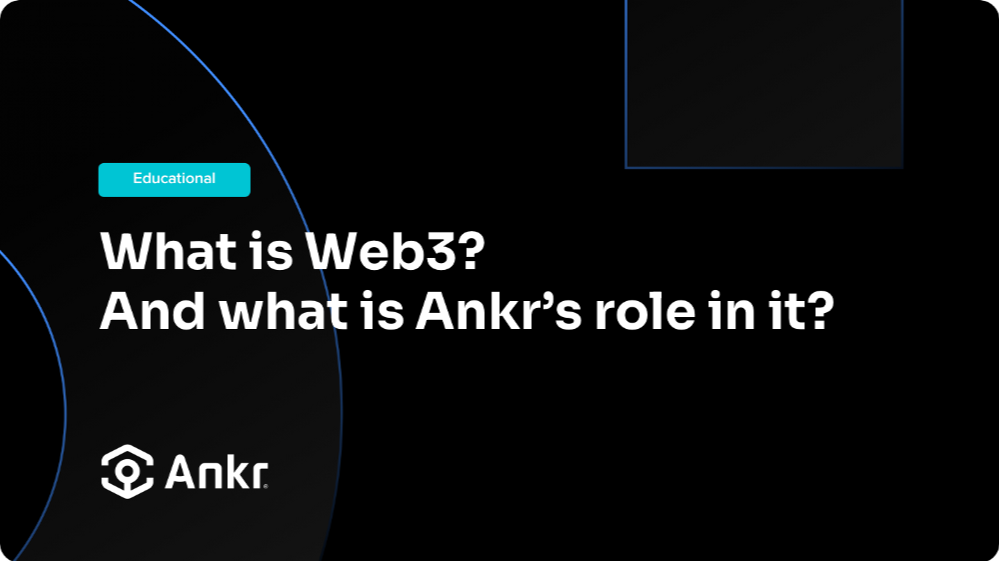 What is Web3 and what is Ankr’s role in it?

If you’ve been an Ankr user long enough (or have taken a look around our new website), you’ll know that we’ve positioned ourselves as the “Gateway to Web3”. So, what exactly is Web3? And by extension, what is Web1 and Web2? And lastly, what role does Ankr play in the grand scheme of things?

Let’s start with a brief look at what Web1 and Web2 were and how they paved the road for where we are today.

Web1 & Web2 — A brief stroll down the information highway

The Internet’s origin was military — at that time, it was called Arpanet. It was designed as a network that could even survive a nuclear attack! Due to its military roots, Web1 was mostly information based in one direction. Superiors would broadcast information to subordinates and easily coordinate.

This is how we saw our first iteration of the Internet — lots of directories, resources, and otherwise static information.

Web 2.0 made the information stream both ways. And with that simple change, the possibilities of the Internet exploded. User-generated content went to create online communities, social networks. Also, it allowed users to quickly develop websites on their own.

Web3 — The current and future internet

While Web2 is focused on empowering users the ability to upload content (think YouTube, social media platforms, blogs, etc.), Web3 builds on this as websites have become smarter. Instead of just passively receiving data from users, algorithms, and machine learning allow the websites to make predictions based on your data for higher engagement and immersion.

Think of anytime Amazon suggested something, and it happened to be perfect for your needs (or wants — we don’t blame you!).

and much more — these are all examples of Web 3 in our everyday life.

The thing these services, and all the dozens of other websites you interact with daily, have in common is their need for data. In today’s age, whichever company can process data faster, more accurately, and make better forecasts because of it are the winners in the end.

Blockchain technology looks to be the next frontier in this information race as it offers new applications that were either impossible or impractical to execute earlier.

Ankr’s role in the new internet

Information is the digital oil for this era. So anything that revolutionizes information itself is a big deal (aka blockchain technology).

Regardless of the use case, infrastructure will always be something that’s needed. Whether that’s small, passionate teams like Deecrypt.io or large renown exchanges transacting millions of dollars in digital assets daily like Binance, we proudly power those on the onward march forward.

While a blockchain is where the information resides, immutable once confirmed by the network, connecting to them in an easy way is key for adoption of the technology and applications built on it.

In our global economy, having access to applications and the protocols they are built on from anywhere all the time is a necessity. This is particularly true in our industry, where decentralization is the unspoken requirement.

But it can be time and money consuming to handle all the technical details, whether you want to deploy a node and earn staking rewards, analyze on-chain data or build decentralized applications yourself.

Ankr is for everyone

We offer solutions for all mentioned participants in blockchain ecosystems: one-click deployment of staking nodes to earn rewards, easy access to on-chain data via a wide array of full nodes and APIs connecting you to the most popular blockchains to build on, such as Ethereum, Binance (Smart) Chain and Polkadot.

Web3 is here — and it is powered by blockchains. Don’t miss out on the future of the Internet. Stake, integrate, analyze and build without studying tons of complex documentation. Head over to app.ankr.com and become a part of Web3 today!