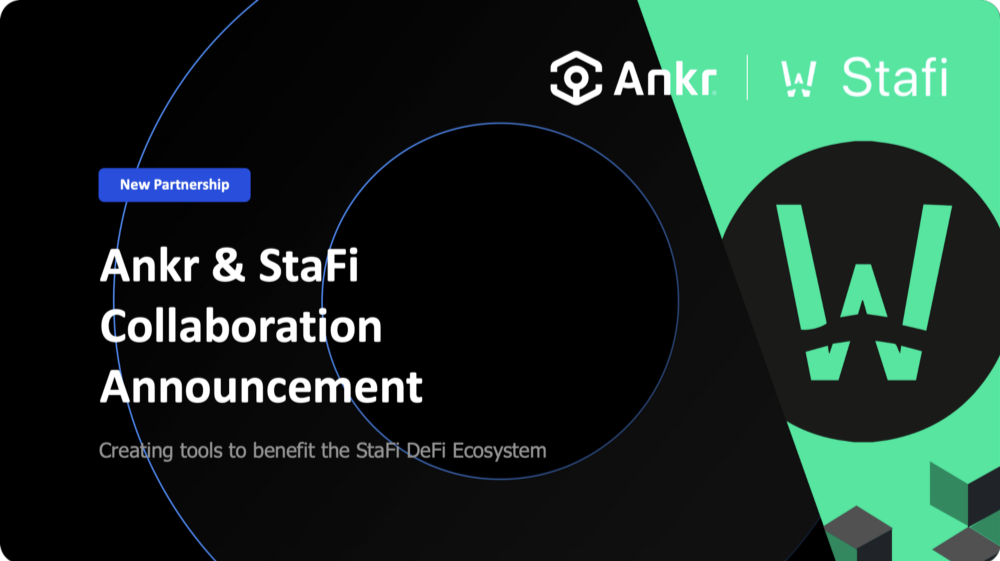 On 28th Sept, we reached an agreement of cooperation with StaFi Protocol, a DeFi staking liquidity provider in the Polkadot ecosystem.

We will provide our open and stable API service to facilitate development of the StaFi browser, wallet and other DeFi tools. Moreover, we have also developed a string of node deployment applications for StaFi validator nodes, which is a cost-effective and useful node delegation solution for StaFi node operators.

Traditionally, developers have to purchase servers and deploy nodes before getting on to the development process of StaFi’s tools. During the preparation phase, at times there will be unpredictable incidents which will waste both the time and the energy of the StaFi team.

On the user’s end, they have to do the same preparation before running their nodes. It is quite a barrier for users who lack technical background. Moreover, the StaFi team’s focus has been on the development of the StaFi mainnet and Staking Contracts(SC), and on developing the required tools for their developers and users.

The cooperation with Ankr is absolutely necessary and urgent for StaFi.

With the API interaction service we provide to the StaFi team, developers will not bother to buy servers or deploy nodes. They can directly build visualization tools such as browsers and wallets based on the StaFi protocol. It will be a time-saver. Moreover, we expect that stable and useful tools will attract more developers to the StaFi code team, making the StaFi ecosystem more dynamic and diverse.

For StaFi users, Ankr will provide a convenient node application that they can deploy with just a few easy clicks. This will drastically reduce the cost of creating nodes and their maintenance. Therefore, this is regarded as a node delegation solution that is both cost-effective and easy-to-use.

With Ankr’s service, StaFi users can quickly deploy their nodes on the StaFi chain. Users who hold a vast amount of StaFi (FIS) tokens and want to nominate a node by delegating their FIS tokens, but want to keep custody of their own funds. They create their own nodes with just a few steps using the node deployment application provided by Ankr, and nominate their own node.

Inflation benefits will also come in. It should be noted that the user’s node must be shortlisted in the validator list, which currently has 120 seats, to enjoy system rewards.

More benefits of the collaboration

We have been working together with the StaFi team for a while already. but we have also been collaborating with leading projects in the relevant sector, especially the ones in the Polkadot ecosystem.

As one of the Polkadot projects which applies Substrate framework, StaFi, jointly with Ankr, will provide useful tools for developers and users, and bring more possibilities to the Polkadot ecosystem. It is definitely something to look forward to.

In the days ahead, Ankr and StaFi will channel each other’s community for mutual benefit. For StaFi, the node network will be further expanded and all community members will operate StaFi nodes in a convenient way. That will make the StaFi network even more secure and decentralized.

As DeFi continues to be a vacuum of capital, the de facto standard of participating in protocols, earning rewards, etc. has been through staking liquidity.

While staking is a massive upgrade in terms of efficiency and accessibility compared to hardware mining, what if there was a way to eat your cake (stake assets for a return, governance, etc.) and have it too (maintain liquidity and tradeability)?

StaFi is the first DeFi protocol unlocking liquidity of staked assets. Users can stake PoS tokens through StaFi and receive rTokens in return, which are available for trading, while still earning staking rewards.

FIS is the native token on Stafi Chain. FIS is required to provide security to the network by staking, pay for transaction fees on the Stafi chain, and mint & redeem rTokens.