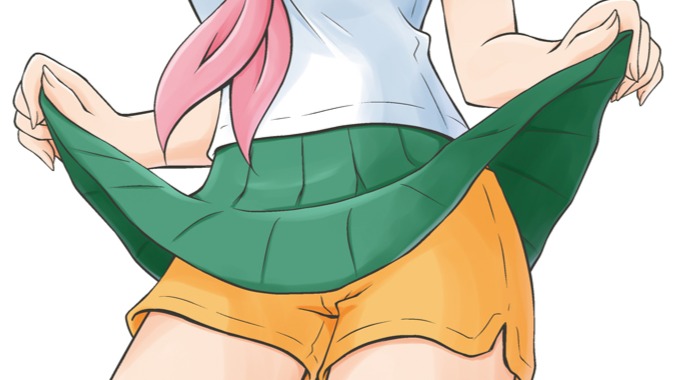 The Challenging Craft of Gender Bender

After almost twenty years of growing up as somebody with insecurities about my gender and confusing feelings involving such a subject, I’ve learned of many different perspectives people have come to have on the subject.

A lot of people these days judge and feelings of sex-related identity issues with being transgender, suggesting that ‘who you are’ is different than your physical gender. That’s one interesting theory, but I think people should be more open to other views on the subject.

Over the years, and seeing that the Gender Bender genre has become bigger in manga (although a lot of them are unsuccessful and end up being cancelled quickly), I’ve become a critique of of the genre. Not just in Japanese art, but in any form. A lot of the time, I feel like the storytelling elements of this genre are either a complete disappointment, or being good in certain ways without being well pieced together.

Not to say that this embodies everything good that you could put in one of these stories, but in my opinion, one of the only times a TG (that’s the slang term I’m familiar with for this genre) was done almost perfectly was the movie Zerophilia in 2004. I don’t have a direct explanation for why I like it, but it had great dialogue, tasteful funny humor, strong character development in relation to gender, a great soundtrack, and a great ending.

One thing I really respect about Zerophilia that it didn’t do (that all too many TG manga do…) was depict the protagonist as some dumb bland guy. Don’t get me wrong; playing on the weaknesses of the guy’s ego are totally key to a good TG story, but it’s not believable or relatable if it’s just a stereotypical perception of an insecure guy.

But over a long period of time, I finally came to a realization. The sexual and emotional thrill I get from TG is not specifically about gender at all. It’s about the idea of exposing innocent and careless joy.

I grew up in an emotionally rough upbringing, with a father who made fun of me for wanting his emotional comfort when I was as young as three years old. Ever since then, I often felt that it was a competition to show that I could hold back my tears as a sense of pride.

I was also heavily medicated at an adolescent age at the recommendation of psychologists that thought they could judge me based on their mental tests. That resulted in me having episodes of vast emotional turmoil, as well as being unbearably nervous about any slightly unusual situation at school. I remember once being shamed for trying to cry in a teacher’s arms, not only feeling embarrassed, but also now like I was being selfish for wanting someone else’s comfort and affection.

And as a lot of us have been taught to think growing up, it’s more frowned upon for boys to show emotional weakness compared to girls. So in the end, I realized that a lot of personality traits that I locked away were things that I ended up assigning to only women. Perhaps I did this because I just felt comfortable assigning them to some category of people that I wasn’t in.

In the end, I think the goal for people like me is to learn to carelessly enjoy life. To not be afraid how others will judge you based on your simple, everyday life pleasures, like going to the beach, or hugging someone else, or showing an innocent smile.

On a side note, I noticed that during the lockdowns, there was a lot of shaming on those who were carelessly enjoying their lives. People were made fun of for going to the beach, for simply walking outside without wearing a facemask, for wanting to play a sport outdoors together… I really feel like people need to think more about how dehumanizing their political fears can be. We all know that most of the time when somebody told someone on the street to put on a mask, that the virus wasn’t really their concern; it was social dominance. When people behave that way, it's usually just out of the fear that others could treat them the same way.

When I was a kid, I frowned upon people, particularly girls, if they showed a careless easy joy of life, because it made me see in them what I was intimidated into no longer feeling. But overtime, I realized that naturally, I am vulnerable. In fact when I looked back on certain memories across my life with just a slightly different perspective, I realized that there were plenty of times when people described me as ‘cute’ or ‘innocent’ in the ways that I always wished, and sometimes hiding it only showed that side more.

We usually use the word ‘cute’ when somebody is showing a sense of both innocence and powerlessness at the same time. Often times when somebody is trying to hide something away but failing to do so, that is the part that’s adorable because it’s relatable.

One thing I’ve noticed in the transgender community, particularly in places like Twitter, is that a lot of transgender women constantly want to be called ‘cute’ and ironically end up acting like nothing but the opposite of adorable. When someone keeps making the statement and shouting ‘I’m a girl’ like a lot of trans advocates do, that is not at all what I think of when I think of an innocent girl. I feel like a lot of people in this community don’t think about the attractive nature of feminine modesty.

Do most women go around flaunting their body in public, saying “I’m a girl”? Of course not, and usually the kinds of women who enjoy doing that are what most people view as more masculine women. That’s because the shyness and modesty about one’s own sexuality is what real femininity is in my opinion. These masculine and feminine traits of course take form in both genders, so if you’re feeling gender dysphoria, I would recommend first just learning to identify and compare your masculine-feminine emotions and learning to be okay with them before wanting to try and repress out one or the other.

Now how does this relate to gender bender? Usually when a guy is turned into a girl, they’re embarrassed about it, right? Of course! Their vulnerability is there for all to see, manly pride striped away, especially if they’re striped naked. So if a man turns into a woman, and they act all embarrassed and weak, they are being no different than just a normal shy girl. At this point, I believe it makes sense to say that whether they were previously a boy or not is irrelevant. Because even girls who have always been normal girls still have their vulnerabilities they like to hide away.

There was an interesting scene in Zerophilia when the main character said "Well it's great to be a girl... If you are one..."; a funny line when you think about it. Because while most people assume that your sex is a part of your identity, it's only as relevant of any other physical attribute. Let's pretend for a second that a magical gender bender really happened to you. That wouldn't mean one of the gender is 'who you are'; it would mean that when you're currently a boy, you are fully a boy, and when you're currently a girl, you're fully a girl.

The art of TG is all about forcibly exposing that vulnerability, and desire to simply want to be loved for your innocence. The only real difference in the stories where it’s a boy that turned into a girl is that boys are more likely to be afraid of being hated for that innocence we all have.

In TG, it’s most cleverly orchestrated when it’s a situation where everyone around the guy thinks that he wants to be seen as a girl, but it’s a misunderstanding. That way, it’s like an extra powerful form of his insecurities being exposed for the cruel world to see, and it’s still a freeing feeling to let the femininity out. 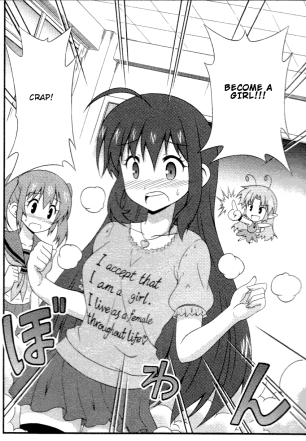 My favorite example of this is Chapter 2 of Morishita Mao’s My Childhood Friend MUST Become A Girl!

The message I want to give is that whether you have a TG fetish, feel that your gender differs from your biology, or feel any emotional imbalance involving the fact that you’re a boy or girl, think first about the way you assign personality traits to gender.

One thing I don't like about Mao's work is that he depicts girls with features like shiny eyes, as if anything besides the eyelashes are different based on gender. It makes me think he also had the problem of thinking women are more innocent than men. Not to mention, if he's just turned into a girl, why is his posture all of a sudden feminine as well? If you took away the sailor uniform and put her in normal clothes, maybe you'd see a more realistic depiction of the girl form without using things like glossy hair and shiny eyes to make unrealistic associations with what it means to be a girl. 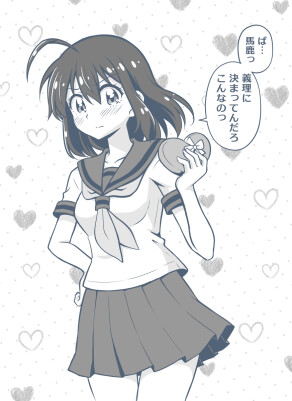 For example, if you’re basing the idea that you’re a girl in a boy’s body based on how you’d like to look like an anime girl, then it should be more than obvious that there’s at least some lack of truth in your perception in human beings. Could a cis-gendered woman ever look exactly like a girl in a drawing style that is designed to depict people in an unrealistically simplistic manner? Of course. If you have insecurities about your looks and want to hide away all your so-called ‘ugly’ human features, then I think you will never be happy until you learn to accept them. By that logic, you might as well tell any woman who’s insecure about her breast size that she should get plastic surgery and a boob job.

Everyone has their concerns about their looks, and everyone wants to be treated nice, but it’s not as if some change in your looks or gender would ever create a world-changing difference. Sometimes we just look for whatever we don’t happen to save, in this example, having the body of another gender, and want to believe that means it will give us a feeling that we don’t normally allow ourselves. But you should allow yourself any simple emotional you please no matter who you are. If humans had the ability to change gender, I assure you they would find something else to be unhappy with, as long as it’s some difference, whether it’s race, age, or some attribute that you might not happen to have.

I found that my TG fetish was just a matter of getting off to the nonconsensual exposition of a woman's pure innocence. I realized that while I felt alone for most of my life in my emotional baggage, it was rather inconsiderate of me not to realize that all women go through the same feelings. People are always more alike than you assume.

Constructive criticism on most of the Japanese Animation community.