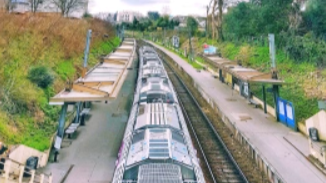 Last week on a train journey to Fontainebleau, which is around 60km from Paris, I was lucky enough to be seated by a window. I was traveling alone, due to which, I sought the companionship of music.

It was the beginning of the evening. Among the rows of 10 seats, punctuated by a passage to walk, dividing them into bays of 3 seats facing another 3 seats on one side and 2 seats facing another 2 seats on the other, I opted for a seat on the 3 seat bay, by an east-facing window in the train moving southwards of Paris. When I sat, there were only very few people.  In the row, in front of mine, sat a blonde woman, facing the same direction as me, on a seat tall enough that the only part of her visible to me was the top part of her head. Diagonally to my right, in the 2 seat bay and in the same row and direction as that of the blonde woman, was a couple who sat close to each other and were engrossed in the phone which I assume belonged to the guy, as he held it firmly while the girl was tapping randomly on the screen. Even though I was not keen on those who were sitting behind me, I did hear, in this French-speaking nation, the voice of an English speaking young woman.   Then a group of 5 boys, who appeared to be south-east Asians came and occupied the remaining seats in my row. While they occupied the 4 seats in the 2 seat bay, the remaining person occupied the rightmost seat facing the south direction, in the 3 seat bay.

Unperturbed by all this, I took out my kindle and resumed reading The immortals of Meluha which I had begun to read earlier that day, all the while listening to music. This is something I don’t usually do but I just gave it a go this time. Sometime later the sound of the train suppressed the music that I was listening to. So, I increased the volume a little so that I could hear music clear enough to make my mood flow with the music and it worked. Unexpectedly, this didn’t distract my reading, rather it set up a perfect evening ride, amidst the dancing of golden hour light through city buildings, as the train left  Gare de Lyon.

I was immersed in reading and observed very little outside the window. The City never amuses me so much as what nature does. The city buildings passed by just like that. My eyes darted away from my Kindle for a brief moment to look at the river Marne. After crossing the river my eyes scooted to and away from the window. As the train reached the outskirts of the city, houses seemed to go far away and greens seemed to approach the railway tracks. In the meantime, I finished a chapter and kept the kindle inside. The train was proceeding in a constant motion and I changed my playlist to one that included OST from movies.  My eyes were now completely glued to the windows, looking outside. I had travelled on this route quite a number of times in the last few months. When I first travelled, it was a cloudy day and the river adjacent to the tracks had flooded the nearby houses. I had learnt from the news earlier that day that there was a flood in Paris but never thought that I would be a witness to it for the first time in my life. There was a calm aura after the floods and my friend, who was then travelling with me, expressed his concerns about how the floods had affected many lives while I had been trying hard to see beyond the calmness left behind by the flood. I couldn’t see what I wanted to see at that time. The next time, when I travelled through this route it was snowing. Compared to the previous journey, this time, I enjoyed looking through the window and it was my first time travelling while it was snowing. The snowfall outside the window did put a smile on me whilst being accompanied by melodious songs from my playlist. The third time I travelled, everything seemed dry, as winter was ending and it was just before spring set foot.

This being my 4th time and that too during spring, I saw lush green trees, alongside the tracks, which were moving rapidly matching the rhythm of the train’s motion, but in the opposite direction. Behind these trees, far away, were small towns which seemed to be situated in the valley. I could see only the top portions of the houses, which were built in the typical French style of architecture. Compared to the trees, these houses seemed to move back a little slower. As I looked beyond these houses, I observed green hills moving slower than the houses. The farthest I saw, were clouds which seemed rooted in their position.  The first thing I observed was, that the objects closer to the train were moving fast while the ones farthest were slow.  As I was engulfed at this moment, I was intrigued by a thought from one of my fellow blogger’s posts. In his recent post, he explained his train journey and the things he observed from it and at the end, he asked the readers to share their train journey experiences. At that point in time, I had passed it as just a suggestion. However, at this point in my train journey, I was driven to bring out the meaning of the experience I was enjoying.

The following is what I understood from my recent train journey…

Just like the train, my life is moving at a constant pace. Even though the train is at a constant speed, objects around the train seemed to move at different speeds. Trees along the track were fast, the town behind the trees was slower and hills under golden clouds on a beautiful warm evening were either very slow or seemed to be completely motionless. Looking back at my life, I realized these things are like people in one’s life. In my life, there were people who brought me smiles and joy but left quickly, just like trees passing by. Towns which were slower but bigger enough to hold my sight were like those friends who were a part of my joys and adventures and I know that they will be there for a very long period just like the towns which grew bigger in time. And then, there is the hill, which is the ‘home’ to not just the trees but also to many other living things. They will be there even as I move far away from them. It could be concealed from sight at times when the trees alongside the tracks hide them completely, but moments later the hills will again be in the line of sight just like my family is in mine. And it dawned upon me that, I look at the hills with high regard just like I look at my parents and brother along with Rocky and Tinkoo.

Jayanth Kumar, engineer by profession and a curious person in the world of art and literature by passion. Born and brought up in Bengaluru, loves vegetarian foods and some non-veg meals too and 'chai' being icing on cake for evenings.

Alemaari, a Kannada word means a wanderer in English. Anchored alemaari blog is about the wandering thoughts presented through the writing, stories, photos and videos.