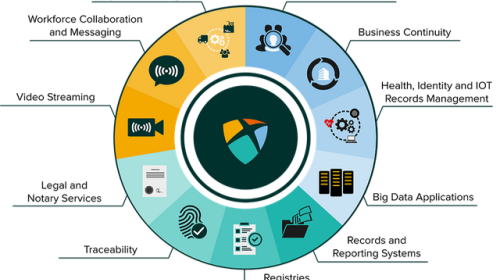 In the 21st century we had witnessed tremendous growth in technology. After the evolution of internet and its globally exception there is lots of development in technology. Blockchain technology is one of the greatest developments in over the past years. The term Blockchain refers to the transparent, trustless, publicly accessible ledger that allows us to securely transfer the ownership of units of value using public key encryption and proof of work methods. Blockchain Technology works on peer to peer network which means there is no need of third parties like Banks, Payments Processor etc. It uses decentralized consensus to maintain the network and a collection of public data which uses blocks and chains to form a ledger. The blockchain technology works on the network of chain and blocks which are mined or produced by the nodes so anyone can become a miner by setting up a node. As the number of nods increases, the network grows larger and it become more decentralized and secure.

The Bitcoin Network is the first successful implementation of blockchain technology in 2008. Ethereum which is a programmable blockchain, introduced smart contract function in the blockchain which can be used by the developers to built dapps (Decentralized Applications) on their platform. This explored the potential of the blockchain.

But the blockchain and dapps based on it failed to make a visual impact. Like Bitcoin, Ethereum also unable to solve the scalability problem with its 20 tps, it failed to support high transactions based applications which requires thousands of transactions with in second like gaming or high volume decentralized exchanges. It also failed to provide peer to peer storage, streaming and database services.

Keeping all the problems in consideration and to provide a universal solution to all types of business to develop their decentralized application Proxima X provide a solution to integrate its core services such as streaming, storage, and supercontracts together by a common blockchain protocol and give a platform where user can use different types of solutions for their business.

PROXIMAX is a next generation blockchain based platform which provide secure, scalable, Integrated, distributed and flexible public blockchain platform for development. It is a next-generation Integrated and Distributed Ledger Technology (“IaDLT”) infrastructure platform solution powered by blockchain technology with built in core-services such as streaming, storage, and supercontracts which provide a platform to the developers where they can built different kinds of business and other application . Proximax integrate traditional protocols such as off chain peer-to-peer storage, streaming, and database service layers with blockchain technology and provide a platform where developer can get advantages of a blockchain-based network, and traditional centralized database solutions.

Blockchain technology has already been spread across the world. There is lots of decentralized project floating on the ocean of the Blockchain. These projects are based on specific niche some project provide great transaction speeds, others focus on storage and security, while others focused on streaming, etc. Each project provides different tools to the developers to develop different kinds of application but there is no relation between these tools. If a developer wants to develop an application based on security, storage, enormous transaction speed and streaming then it is too difficult to develop such type of application because there is no integrated tool available in the market. This is the current issue of the blockchain world or we can say it is the biggest barrier on the way to mass adoption of blockchain technology.

THE SOLUTION - THE PROXIMAX SIRIUS CHAIN

Keeping all the problems in consideration and to provide a universal solution to all types of business to develop their decentralized application Proxima X provide a solution to integrate its core services such as streaming, storage, and supercontracts together by a common blockchain protocol and give a platform where developer can build different kinds of application. ProximaX provide a set of different kinds of tool to develop wide range of application on its platform. Using ProximaX and its core services you can build next Facebook, YouTube, Steemit, Skype, Amazon or anything else you can think. PROXIMAX Technology and Its Core Services

PROXIMAX provide a platform where developer can develop applications and system solution for the commercial use. As Proximax provide immense flexibility with the help of its core services such as streaming, storage, and supercontracts which enhance the platform’s scope of capabilities to the mass so all core services are then held together by the Sirius Chain, which acts as the platform’s backbone. Sirius Chain is the platform's Blockchain which is used to record all the action which happens on the platform. Sirius Chain woks on contracts which can be used for different kinds of businesses

To enhance the overall utility, performance and security of the network Proximax Introduce ‘’Service unit’’. These units are technically digital token which can be used for token economy for incentivization.

The interesting fact is that which should be kept in mind Sirius Chain is the younger brother of the very famous NEM’s Catapult, which has been improved for better execution of transactions.

Sirius Storage is a trustless Distributed File Management System (“DFMS”) which store binary data into peer to peer storage devices which are hosted by the different owners. Sirius Storage not only works like storage device it also works as a repository for supercontracts. Storage nods act like Executor nods which not only store codes for superconterect but they also have machines to execute the code.

Traditional smart contracts are immutable in nature means if there is a bug in the code then it is too difficult to rectify it because the debugging process is long and difficult but in Proximax Supercontrects, the executable code is stored in Sirius Storage which are also responsible for execution of contract so the debugging process is simple and less time consuming.

There are two different types of Sirius Streaming

Live Streaming: When the data is recorded live and streamed live to its users its called live streaming.

Sirius Database is a document based storage which can be used to store data by any project. Any application which required storage as a part of their solution, they can use this solution.

BENEFITS OF USING PROXIMAX OVER OTHER BLOCKCHAIN INFRASTRUCTURE

The combination of both traditional and blockchain based technology allows developer to develop applications and business solutions without depth knowledge of blockchain which reduce the development time and help to reduce the total cost of ownership.

Proximax use Sirius chain which is highly scalable and able to handle growing users base and high volume of transactions. Users are also able to store large streamed data to the distributed layers.

Distributed technology make Proximax highly secure for cyber attacks because to get access on the data it is necessary to compromise all nodes that are containing the peace of data.

Proximax uses Sirius Chain which is the younger brother of the very famous NEM’s Catapult, which has been improved for better execution of transactions. So the chain is able to execute transactions in very high speed.

Proximax API's are available in huge rang of programing languages so anyone can use the platform and develop their application. ProximaX is looking a promising project in Blockchain World because the concept of the project is good and they are working hard to achieve their goals. Integration of main services in a single project is good thing and developer can easily opt this platform to develop their applications core services such as streaming, storage, and supercontracts can help them to achieve their goals.

Im giving this project 4 Star Rating out of 5

Blog References:
Official Website
ProximaX Whitepaper
Proxima at a Glance
All Screenshots and logos are captured from official websites

Thanks for reading my blog
@ajks

I'm 25 years old Cryptocurrency enthusiast getting started with Publish0x to share content about Cryptocurrency, Decentralisation and some other stuff.