Great Horned Owl with a Surprise
3 DAYS TO DEADLINE! MyCryptoOutlook2022 BitYard Contest and Giveaway - $1,200 in ETH Prizes! >> JOIN FROM HERE << 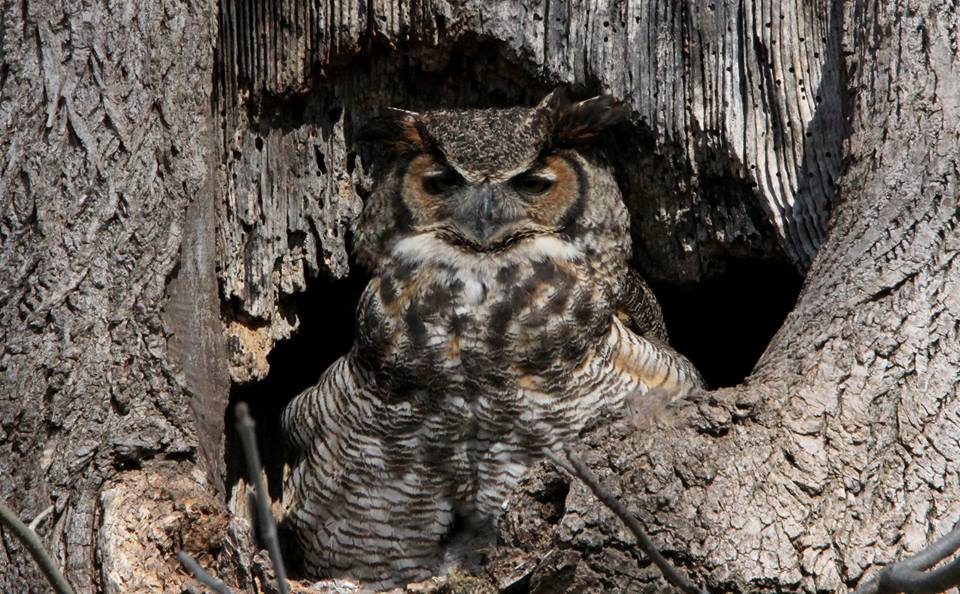 Great Horned Owl with a Surprise

Some of the most difficult birds to photograph in my opinion are owls. They are well camoflauged, quiet and stealthy. You can walk by them and never even notice them. I was lucky enough oneday to spot this Great Horned Owl sitting in a hollowed out part of a tree. For a couple weeks I would check in the area and see if the Great Horned Owl was still there and it was, so I knew it was a nesting spot for this owl and she was waiting for some eggs to hatch. About a week later, I went back to photograph the Great Horned Owl and was surprised to see a squirrel approaching the owl a little too closely. I thought to myself, I am going to get some really good action shots of this owl tearing up a squirrel to protect her nest but to my surprise, the owl never came out after the squirrel and it wasn't long after I knew why. Here are some photos of the squirrel approaching the Great Horned Owl and you can see her watching the squirrel very closely 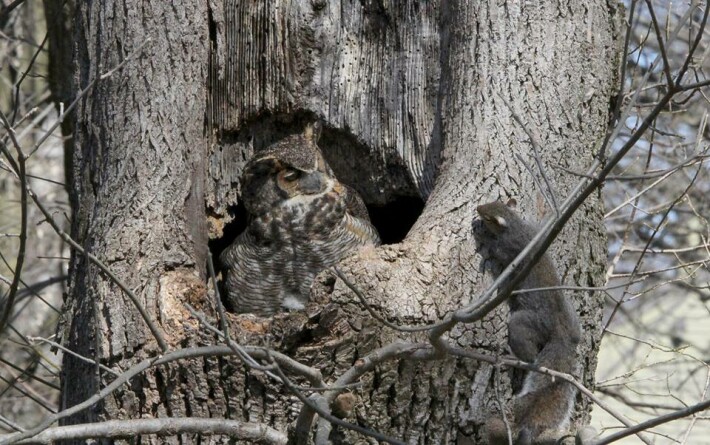 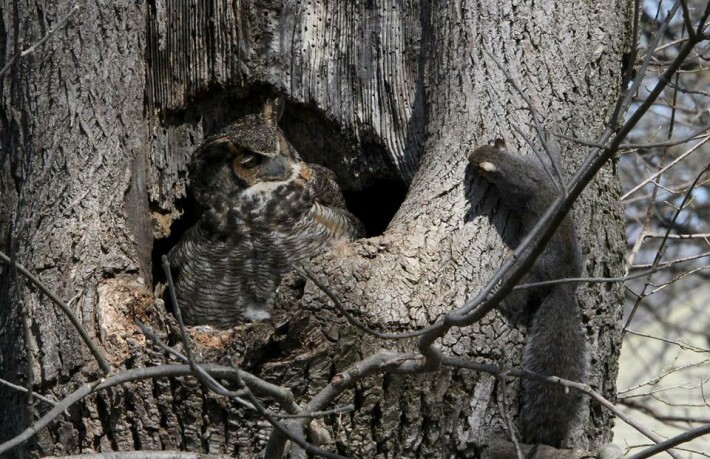 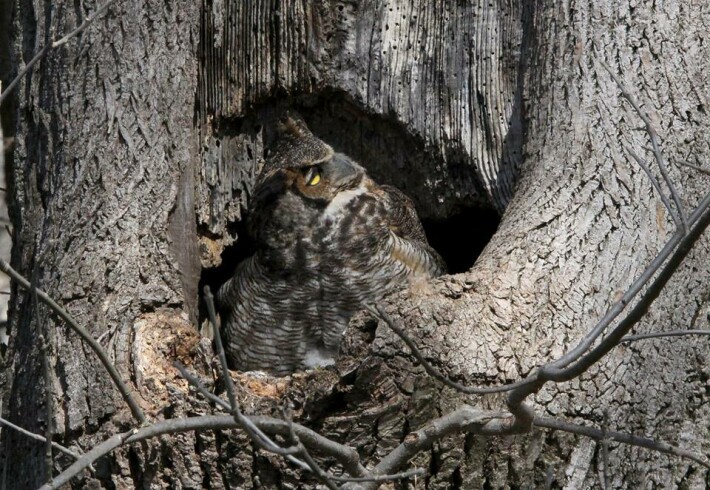 I thought to myself, wow, wish that squirrel would come back and become lunch for this owl. Photos like that are money shots. Some people get disgusted over photos of wildlife devouring other animals but this is what wildlife does and how they survive. We are no different really. Our food is just slaughtered somewhere else and distributed to stores for us to purchase and devour, lol Yummmmm 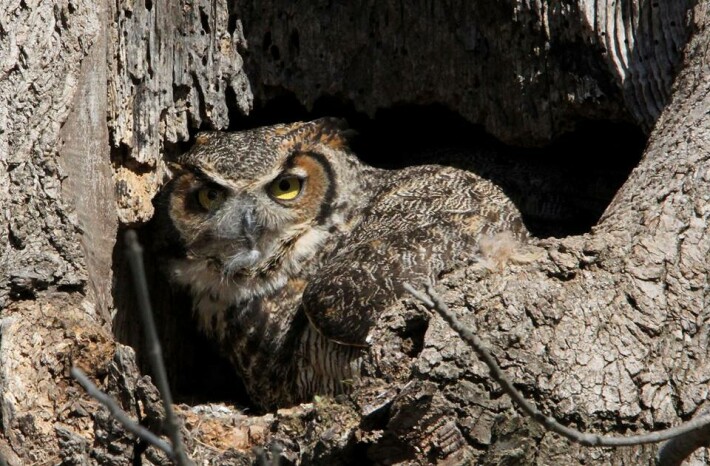 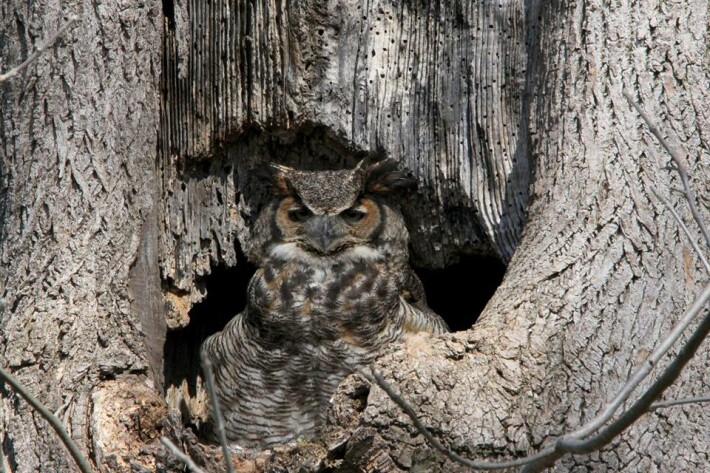 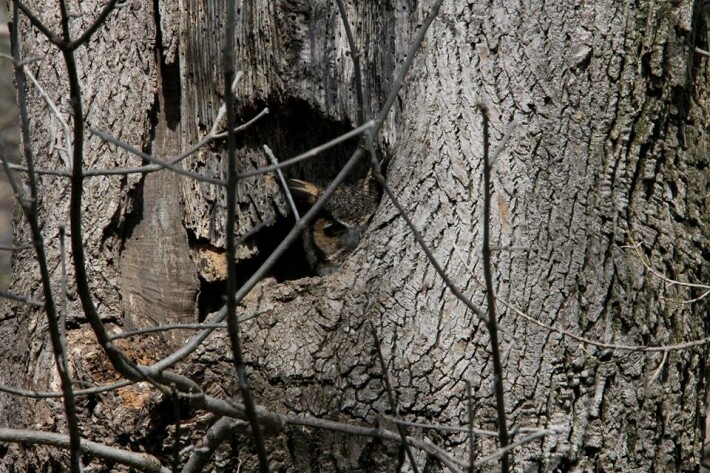 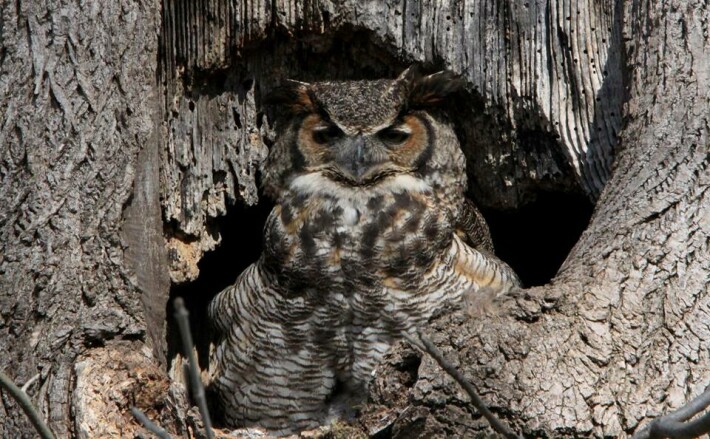 While I am photographing this owl, all of a sudden, she backs up and I see something white through the lens of my camera and it's a wing of a newly born Great Horned Owl, maybe a few days old and all of a sudden the young Great Horned Owl makes an appearence for me. Here are the photos :) :) :) This is why that squirrel wasn't attacked 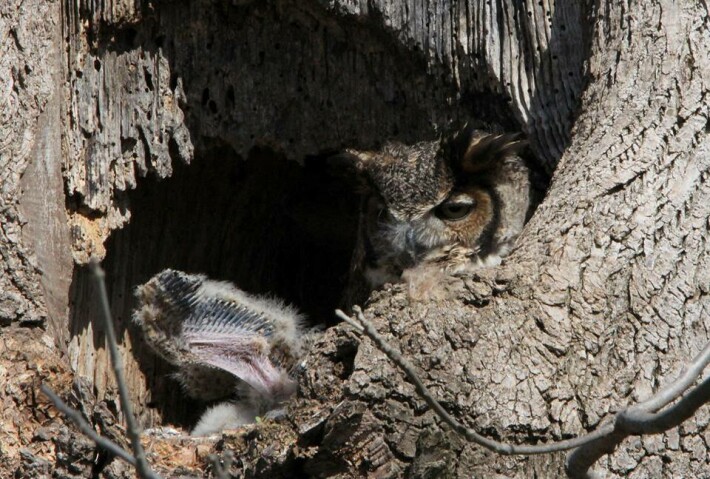 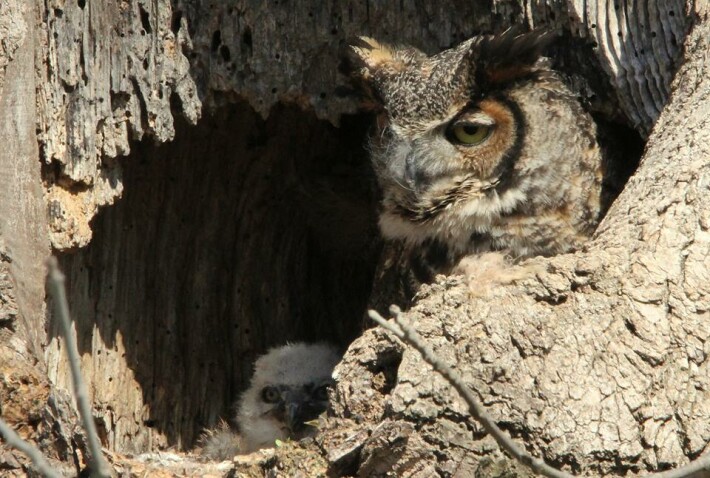 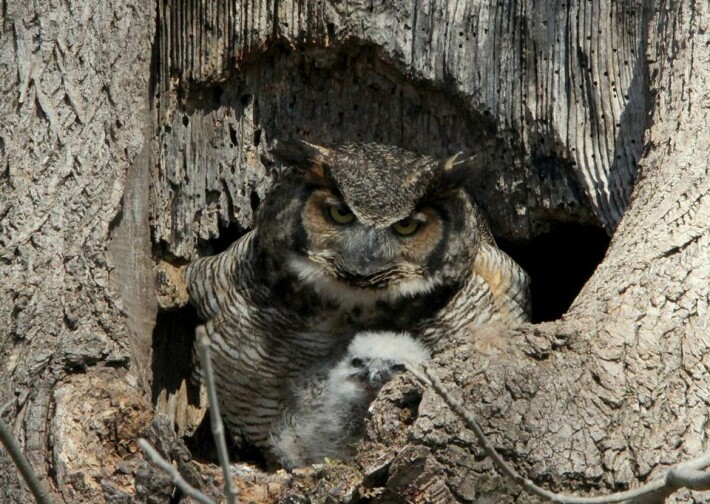 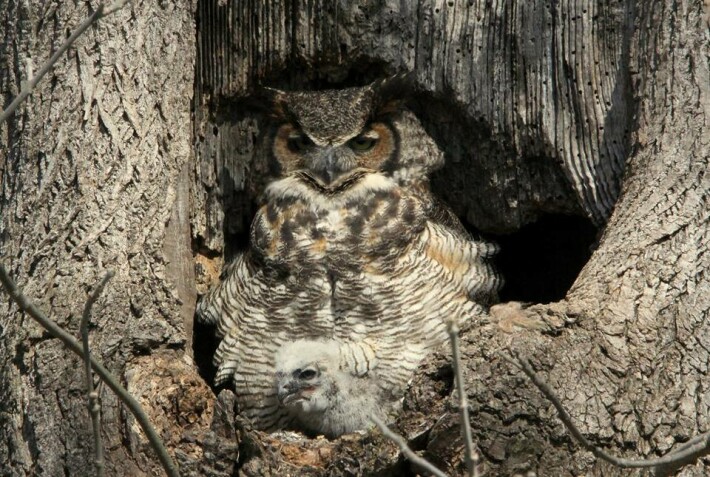 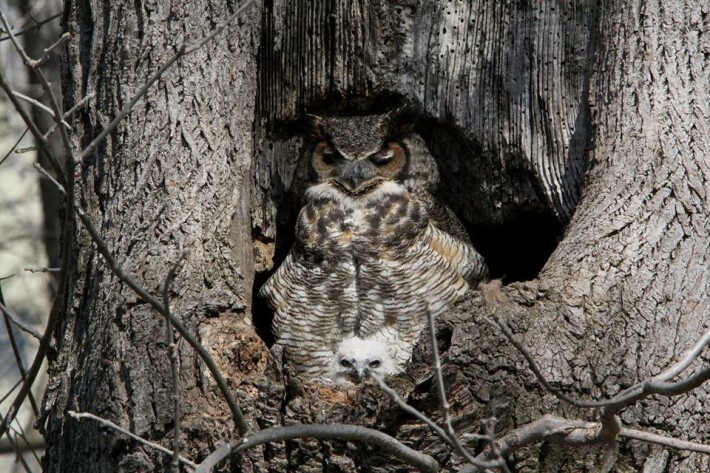 What a lucky day for me. Photographing the young owl was very exciting.

With its long, earlike tufts, intimidating yellow-eyed stare, and deep hooting voice, the Great Horned Owl is the quintessential owl of storybooks. This powerful predator can take down birds and mammals even larger than itself, but it also dines on daintier fare such as tiny scorpions, mice, and frogs. It’s one of the most common owls in North America, equally at home in deserts, wetlands, forests, grasslands, backyards, cities, and almost any other semi-open habitat between the Arctic and the tropics

1. Great Horned Owls are fierce predators that can take large prey, including raptors such as Ospreys, Peregrine Falcons, Prairie Falcons, and other owls. They also eat much smaller items such as rodents, frogs, and scorpions

2. When clenched, a Great Horned Owl’s strong talons require a force of 28 pounds to open. The owls use this deadly grip to sever the spine of large prey

3. If you hear an agitated group of cawing American Crows, they may be mobbing a Great Horned Owl. Crows may gather from near and far and harass the owl for hours. The crows have good reason, because the Great Horned Owl is their most dangerous predator

4. Even though the female Great Horned Owl is larger than her mate, the male has a larger voice box and a deeper voice. Pairs often call together, with audible differences in pitch

5. Great Horned Owls are covered in extremely soft feathers that insulate them against the cold winter weather and help them fly very quietly in pursuit of prey. Their short, wide wings allow them to maneuver among the trees of the forest

6. Great Horned Owls have large eyes, pupils that open widely in the dark, and retinas containing many rod cells for excellent night vision. Their eyes don’t move in their sockets, but they can swivel their heads more than 180 degrees to look in any direction. They also have sensitive hearing, thanks in part to facial disc feathers that direct sound waves to their ears

7. The oldest Great Horned Owl on record was at least 28 years old when it was found in Ohio in 2005