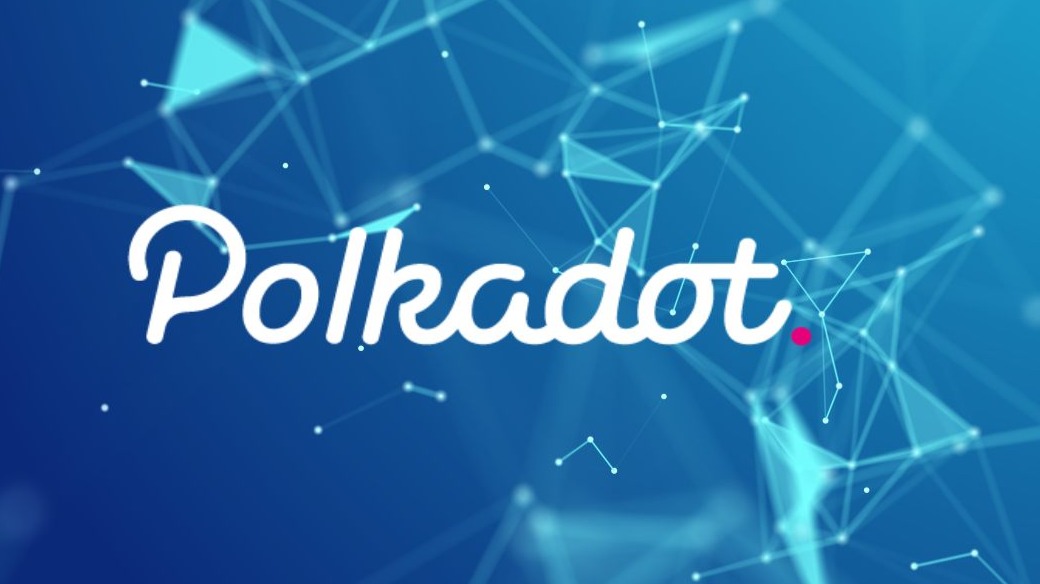 The Booming Polkadot Ecosystem and Its Top Tokens

Polkadot’s native coin DOT has quickly risen to become one of the largest cryptocurrencies. In step with this, the sheer number of projects to emerge in the wider Polkadot ecosystem has been nothing short of dizzying.

In simple terms, Polkadot is a software that incentivizes a global network of computers to operate a blockchain on top of which users can launch and run their own blockchains. It was founded with the aim to grow an ecosystem of cryptocurrencies like Ethereum has.

Why Is Polkadot So Popular with Developers?

Polkadot has been referred to as the “blockchain of blockchains.” It is an inteoperable ecosystem built using Substrate—a framework that allows developers to create entire blockchain applications, cryptocurrencies, and decentralized systems with (relative) ease.

With many unique features on the Polkadot blockchain, the number of projects has quickly diversified since 2018 and now spans numerous industries. Many of these projects have launched their own tokens, many of which have risen to prominence on the market.

Why Is Polkadot So Popular with Investors?

As Bitcoin and Ethereum have cemented their market dominance, investors have increasingly looked to other tokens. With Polkadot now boasting an enormous market cap of some $34B, savvy investors are looking to the tokens of its associated projects for the steepest price gains. This has held out to be a wise move in the bullish market of late, as this chart of the Top 10 projects in the Polkadot ecosystem shows. 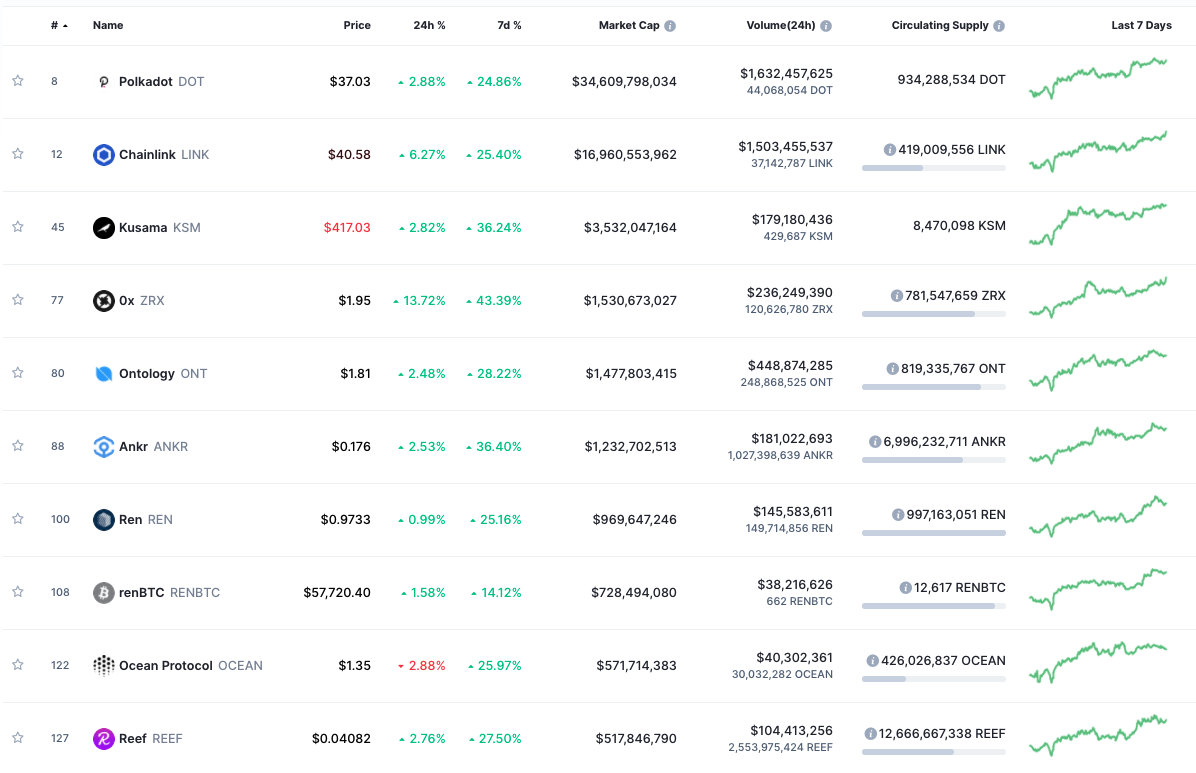 What Are the Polkadot Sectors?

The number of projects in the Polkadot constellation is daunting to wrap your head around. Not to mention the technology and systems that underpin them. While the technical details of these can be mind-bendingly complicated for anybody but developers, for the average crypto investor it can be more comprehensible to look at Polka projects broken down into industry categories. 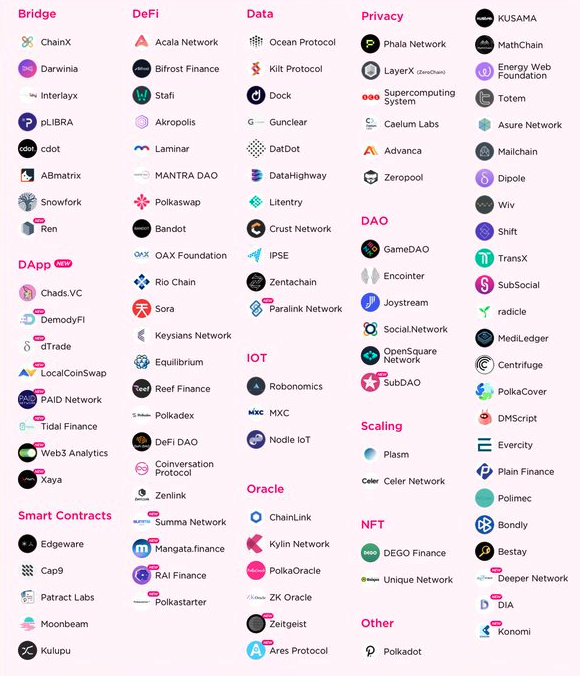 Below is a cheat sheet to each industry, the goal of the projects within each, and the tradable tokens related to them. Specifically, these are the Substrate-based projects. Note that alongside each token listed below you will see the market ranks (donated by “#”), sourced from CoinMarketCap and listed in order of market capitalization compared to other coins and tokens in the wider crypto market.

As the map of blockchain network grows, many remain cut off from one another, like islands with their own economies and communities that can’t exchange value or info. Polkadot allows sovereign blockchains called parachains—each potentially with their own designs, rules, use cases, and tokens—to be interoperable. Polkadot also allows parachains and external networks like Bitcoin and Ethereum to be inteoperable via bridges. ChainX was the first bridge project launched in the ecosystem. More recently, Ren and Darwinia have announced they would strengthen their integration with Polkadot.

A DApp, or decentralized application, is a software application that runs on a peer-to-peer network. Polkadot's breakthroughs in operability and scalability have attracted many minds eager to build DApps within its network. Such projects include PAID Network, which leverages blockchain tech to deliver DeFi-powered smart agreements for businesses; and Xaya, a purpose-built blockchain for hosting decentralized game worlds.

While Polkadot does not support smart contracts natively, its parchains do. A number of projects have emerged looking to leverage this, including Edgeware, a smart contract chain with a community-managed treasury and network of DAOs; and Kulupu, a self-updating self-governed blockchain system using proof-of-work as its consensus engine. More recently there has been excitement around Moonbeam, a new Polkadot smart contract platform that makes it easy to build natively interoperable blockchain applications (though it does not yet have a tradable token).

DeFi, or Decentralized finance, has emerged as one of the most popular use cases in the crypto ecosystem. In short, DeFi is financial software built with blokcahin technology that has the potential to make financial applications more open and accessible. An increasing number of DeFi teams are now building for the Polkadot ecosystem. These include Polkastarter, designed to provide an easy-to-use launchpad for cross-chain token pools and auctions; and the bullish Sora, which offers cross-blockchain transfers of any type of asset.

Polkadot’s network protocol allows data—not just tokens—to be transferred across blockchains. This makes it possible to build applications that get permissioned data from a private blockchain and use it on a public blockchain. A leading project is Ocean Protocol, which allows businesses and individuals to exchange and monetise data and data-based services. Litentry has also been gaining traction, with its promise to enable users to aggregate identities from other chains.

The internet of things (IoT) is an umbrella term for the growing number of electronics that aren't traditional computing devices, but are connected to the internet to send data and receive instructions. The launch of parachains on Polkadot set off a race to merge blockchain technology with IoT services. By connecting devices to the Polka parachain, developers achieve a level of security not possible with conventional cloud-based IoT systems. The leading token of these projects is that of MXC, whose vision is to introduce a systematic process that simplifies IoT data transactions.

In the blockchain context, an oracle is a way to bring real-world data onto the blockchain so that it can be used by a decentralized application. Put simply, they serve as bridges between blockchains and the outside world. As Polkadot develops, more oracle parachains are appearing, however the leader is Chainlink, a tokenized oracle network that looks to connect smart contracts with data from the real world.

Some Polkadot projects are being designed with the preservation of privacy at the core of their mission. One such project is the Phala Network. Its founders conceived it as the first confidential smart contract network built on Substrate to provide confidential computation and data protection services for enterprises and users.