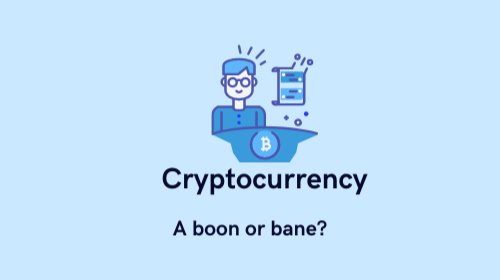 Pros and cons of Cryptocurrency.

Cryptocurrency, a topic that is in the heat today as more and more people are investing in it.  Most people have left their job to pursue a career in this field. Courses available online to train people in crypto investment. Well, most of the things happening today are revolving around it. Let us understand is Crypto a boon or bane to us.

As we know every good has some evil and every evil has some good. Similar is with Crypto. There are both advantages and disadvantages of crypto in today's world. Let us understand and know about them. 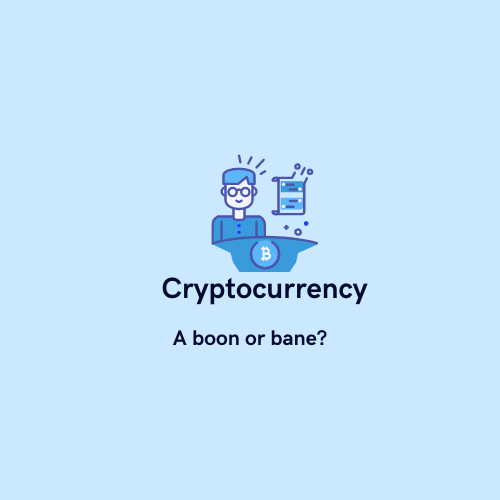 1. Protection from inflation:- Inflation causes the decline in many currencies. It has happened pretty much in past, take the example of zimbabwe or Venezuela. This is not the case with Cryptocurrency. They are released with a fixed amount but as the demand increased, the value of crypto also increases, thus in a long run prevails inflation.

2. Crowdfunding:- Many start-ups need investments to operate, they could depend on few investors that are investing a hefty sum or with many investors with little sum. Crowdfunding is when a large number of people invest little in some app or start-up. It is an increasingly popular way for entrepreneurs to raise money for their concepts and/or products. With a large number of small investors investing, it mitigates risk. Thus initiate people to invest in it. Many projects on different crypto platforms are in fact supported by small investors. One example is dAPP.

3. Secure and private:-The blockchain ledger is based on different mathematical puzzles, which are difficult to decode. This makes a cryptocurrency more secure than ordinary electronic transactions. The key to access your wallet is ciphered thus is hard to cark rather than your bank pin.

4. Could make foreign money transfers and transactions safer:- Cryptos can make our in-home as well as foreign transactions safe. When you go to other countries, carrying the cash and money card is pretty dangerous. Plus the convention fees of some countries are very high. Thus not only Cryptocurrency could reduce the risk of carrying cash but could also eliminate exchange fees.

5. Cost-effective:- With the help of cryptocurrency, the transaction fee paid by the user could be reduced to negligible to zero. Thus you can send money overseas in form of crypto without paying hefty charges. It eliminates the third party such as Paypal which charge a large sum to verify the transactions.

6. Decentralized:- A major pro of cryptocurrency is that it is decentralized, that is, it is being controlled by a group of people rather than a single entity. This not only reduces the need for the third man such as banks that once in while goes in crisis and people's taxes are spent to rescue them.

1. Data loss can cause Finacial loss:- The platforms and wallets of these crypto platforms are made such that they're super secure against any hacker attacks. This gives it an advantage over the cash or bank vault. But if you lose your private key of wallet, then you cant access the wallet, hence no matter how many coins you have are all gone or we could say become dormant. Stefan Thomas, a German-born programmer, lost the key of harddrive called  IronKey which contains the private key of a wallet that currently holds 7002 bitcoins. Stefan Thomas lost the paper where he wrote the password to open the hard disk. He is just 2 tries away from completely losing his million-dollar fortune.

2. Decentralized but still operated by organizations:- Cryptocurrencies are known for their feature of being decentralized. But, the flow and amount of some currencies in the market are still controlled by their creators and some organizations. These holders can manipulate the coin for large swings in its price. Even hugely traded coins are susceptible to these manipulations like Bitcoin, whose value doubled several times in 2017.

3. Adverse Effect on climate:- For mining, we need a large amount of computational power that further needs electricity. In fact to mine a 1 bitcoin 60% of income is spent on electricity. So for countries like China where most of the electricity is coal-based and with large mining going on, has drastically increased the carbon footprint. Similar to any other countries that depend on fossil fuel for electricity generation such as India, the middle east, and so on. This has adversely affected our climate.

So, when a useful technology is created, it can be used in both bad and good ways. It's our moral and ethical responsibility to use these technologies for good purposes.