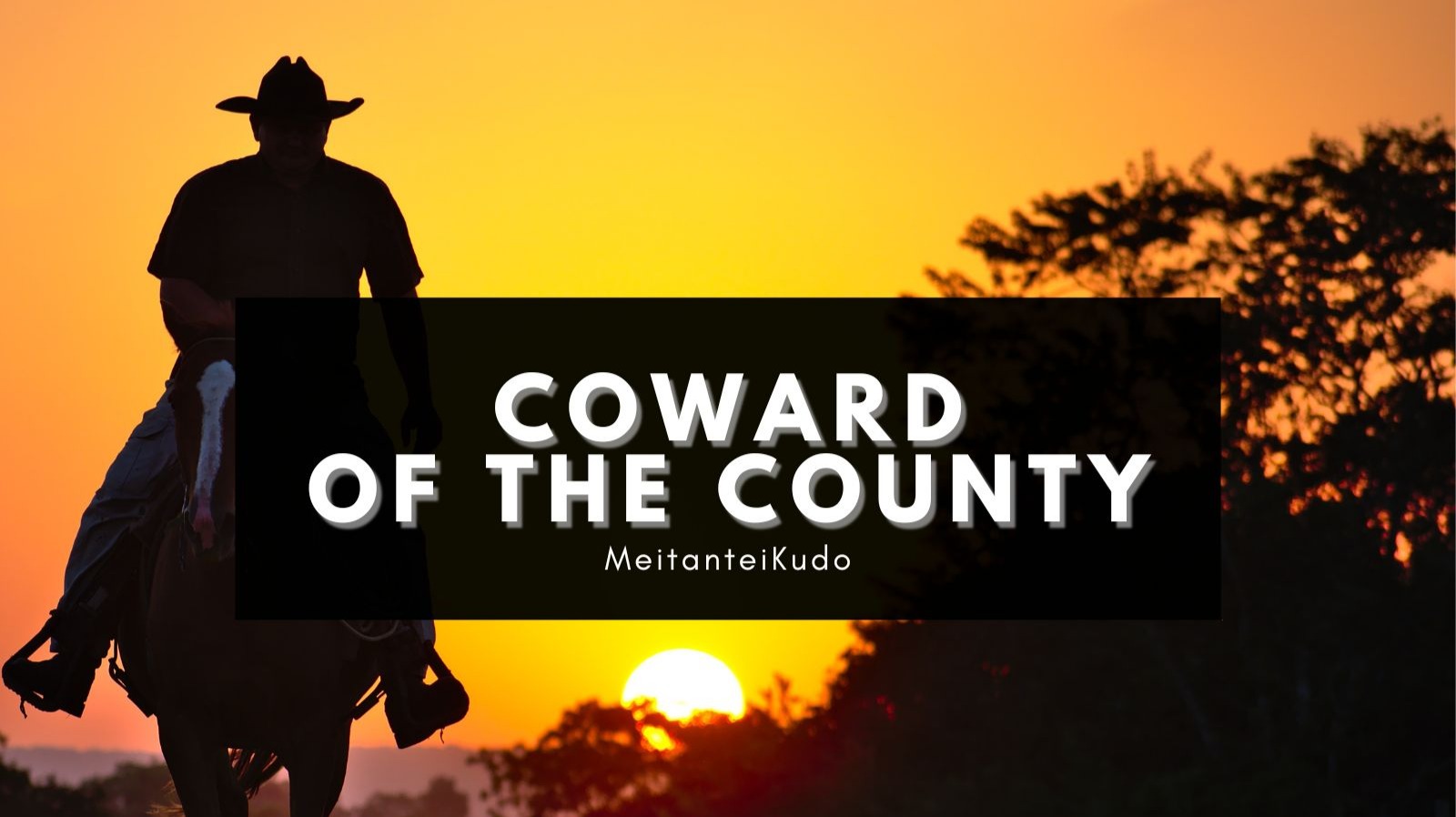 Coward of the County

Tommy was seated in his cell looking at the palm of his hands. Not a single shred of remorse can be seen on his face. The tears he was shedding were not for any of the men he killed but for the love of his life. The only person that accepted all of him and his everything, Becky.

He reminded me of the very first time he laid eyes on Becky. He was tending the horses back on the ranch of Old McGregor and he saw a modestly bright face looking in his way. A lovely maiden with a basket of flowers in her hand.

"Top of the morning to you mister." the lady said shyly as she walked past him. He felt that he swallowed his tongue since he can't utter a single word. He swallowed a huge chunk of air and mustered all his courage and called out to the lady. "M-m-morning m---." and then he bit his tongue. He winced and pranced around in pain and the lady turned to him and chuckled.

Her eyes glistened with the drops of the sun, that's how he chose to remember Becky's eyes and not the horrified and lifeless orbs he just witnessed earlier in the morning.

"You really dun' it this time son. Dropped 'em dead, and they all went a-dyin. Every single one of 'em, dead, a goner." the sheriff told him through the bars of his cell. His voice was empathetic and the sympathy is obvious. Not a single stain of judgment can be heard in his voice.

"It's real true I guess. That thing them people say. Apples don't fall far from the goddamn tree."

Tommy closed his eyes to stop the tears from falling but nothing seemed to quench the thirst of the ground for his tears. He heard in his head his father's voice the last time they spoke. He was a child back then.

His father's hand was holding his right cheek while he was telling him "Guess this is it, boy. My life's over. Look at me boy. I want you to know that yours is just beginning. Promise me not to them things I done. Live your own damn life. Keep yer head down boy. Keep it real low. Nothing good comes from living like an outlaw."

Tommy remembers clearly what his father's words were before the bounty hunters took his daddy away. His daddy was arrested for grand larceny, manslaughter, and murder. Tommy was left in the care of his uncle and led a life away from the shadows of his father.

Growing up, he was bullied and he was taken advantage of. He never said a word, he never stood his ground and that's why people seemed to always pushed him around. The only person who saw his worth was Becky. She was his world and she was the one that kept him alive. She was the only reason he can smile when he get home and all the other stuff and everyone else from the world disappears when he is with her.

That beautiful world crumbled around him that morning when he came home from the hills. He arrived at the house and the first thing he saw was the broken lock on their door. He hurriedly ran inside and saw his Becky lying motionless on the floor. Her naked body, the torn dress, her disheveled hair, and her lifeless teary eyes told him the story of what had happened while he was gone. He screamed at the top of his lungs until his throat hurt. He held her in his arms and she was barely breathing. He carried her out and laid her gently onto the wagon. He worked the horses as fast as he could as they reached the doctor in town. He left her in his care and went back home.

He looked around and just underneath their dining table, a cowboy hat was there. There lay a symbol, a symbol that was totally familiar to him. It was a symbol that he had just seen the day before. A band of low lives they met around the town, they called themselves the Gatlin boys. They were known to be caught up in bad stuff and they were feeling untouchable with their guns slinging on their sides. The boys cat-called Becky and shouted profanity at the couple when they passed their "turf".

He took the shotgun down from their fireplace. It was his father's. His father took care of that gun like it was his only possession. At a very young age, he reluctantly learned how to use it and as a memento of his father, he kept it in good firing shape. He practiced shooting with bottles and cans in their backyard.

As he loaded the gun with live bullets, his gaze fell upon the framed picture of his daddy. He pocketed more ammo and started talking with his dad.

"I promised you, dad, I won't do the things you've done." his tears began to fall and his sobbing was uncontrollable.

"I have walked away from troubles all my life. Now, I beg of you father, forgive me. I won't have it if you say I am weak but I just couldn't turn the other cheek. Pop, I sure hope you understand. Sometimes you've got to fight when you're a man."

He calmly but briskly paced into the saloon where the Gatlin boys are gathered around for beer. All the townspeople moved out of Tommy's way when they saw him walking with the rifle and his finger on the trigger.

He reached the saloon and slung his rifle on his shoulder. The door swung open when he came through it. The Gatlin boys were seated at the corner tables. Tommy locked the doors of the saloon and started shooting. He fired shots and the Gatlin boys fired back. It was a shootout and a hellish barrage of gunfire.

He took cover behind the bar and he kept shooting. One, two, three, men dropped one by one.

It was total silence when the bullet storm stopped. Tommy was shot in the shoulder, but it was nothing compared to the other guys. He struggled to stand up and approached a man groaning in pain. He took one of the fallen guys' pistols. Cocked it and pointed the barrel between the man's eyes.

With a low and flat voice, he said, "This one's for Becky." and the final shot rang across the quiet town. Tommy lay on the bare floor on his face. Waited for the authorities to come and he was arrested.

The sheriff entered the saloon and exclaimed, "What on fresh hell happened here?"

"It's Tommy sire. Shot dead them Gatlin's. Guess they weren't laughing at him now."

This one is inspired by Kenny Rogers' hit "Coward of the County".

This is an interesting exercise since I believe that songs tell a whole story as they are, but to expand the reach of the song into a full-blown story. Mind-blowing.

I really loved that song from the very first time I heard it. I know what you think, I had my work cut out for me because this country song is already a story in itself. I know right? I just wanted to complete some scenes of the song. This sort of challenge was fun doing. And yeah! I had a great time writing this one. Try it!

Here's the song with its lyrics if you want to listen to it.