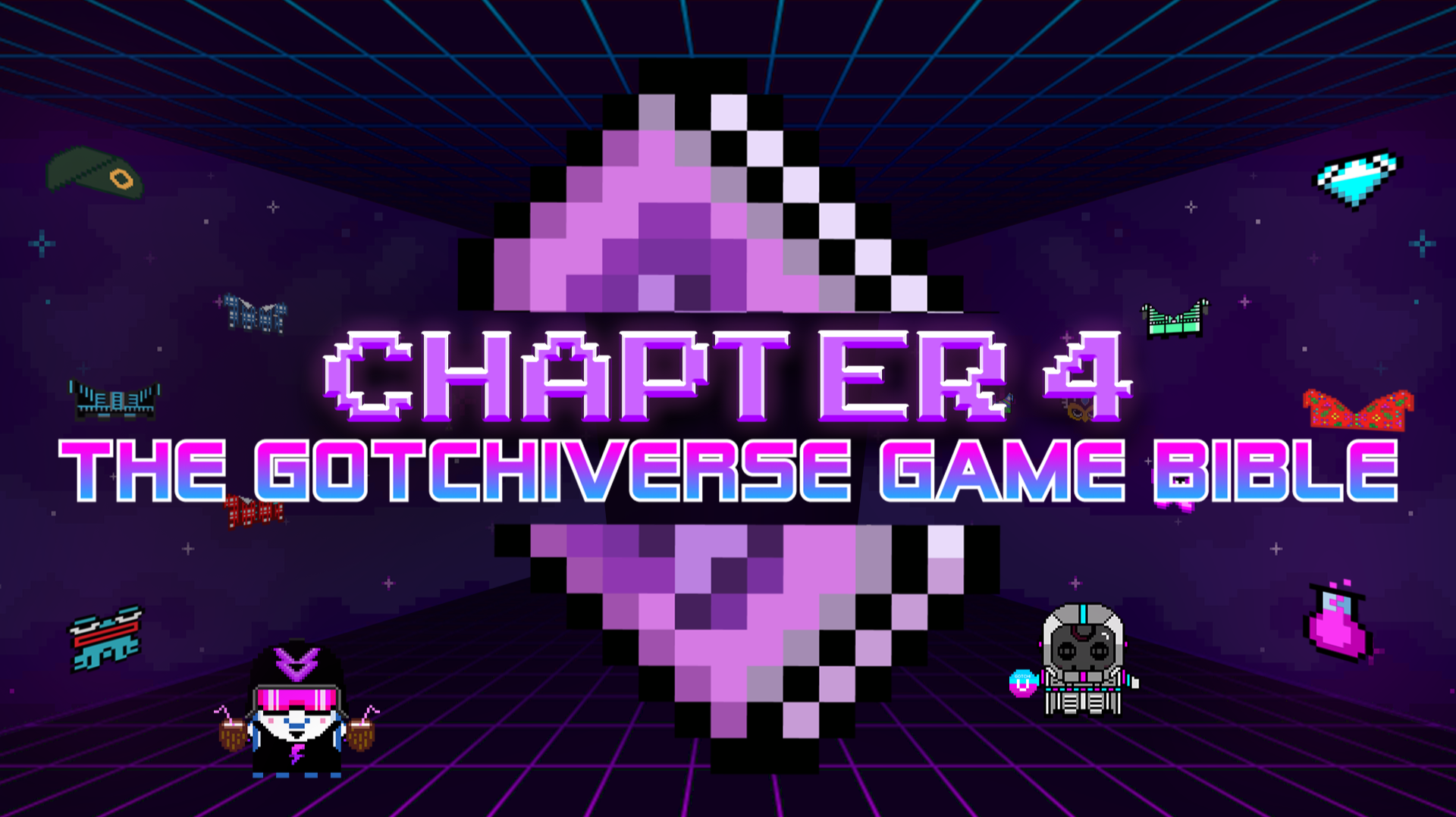 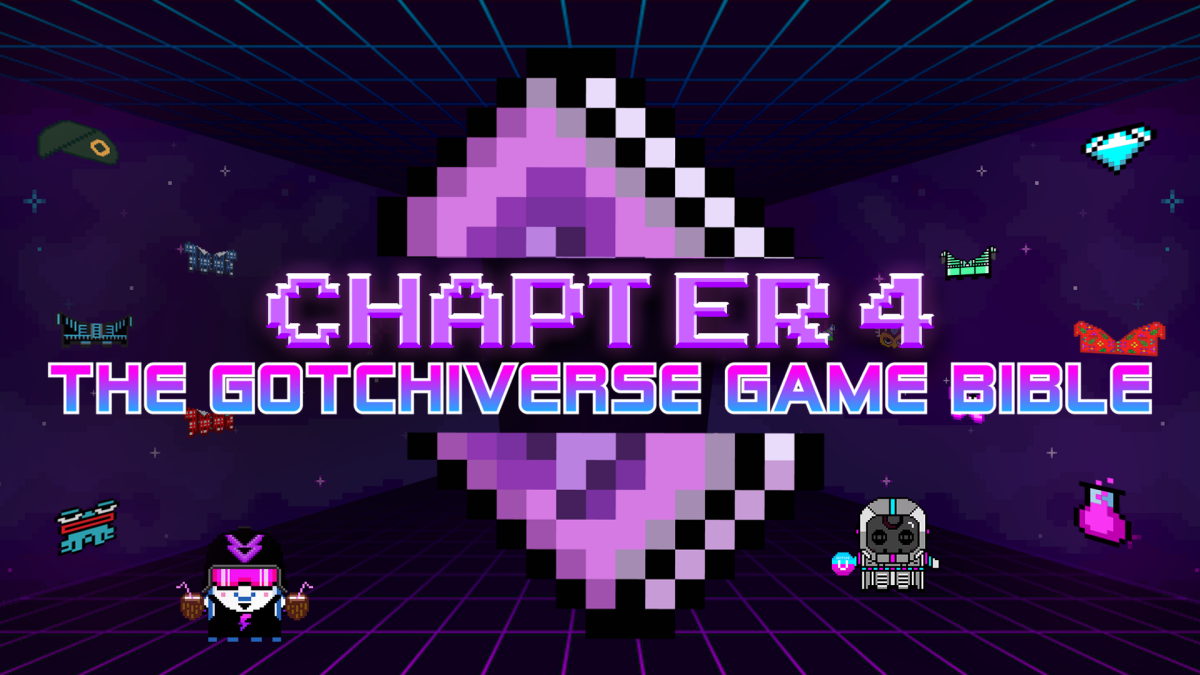 Today we are excited to publish Chapter 4 of the Gotchiverse Game Bible, a public-facing game design document that serves as a reference manual for all things Gotchiverse. This chapter dives into specific benefits for Wearables, followed by an overview of the rules for building Estaates within the Gotchiverse. The chapter concludes with a discussion of access rights and Land Management.

How a Chapter Becomes Canon

In tandem with the publishing of each Chapter, we will create a discussion thread on the DAO forum where the community can discuss the information presented in the Chapter.

Note: the full Game Bible document will be hosted on the Aavegotchi Github page, which allows for transparency between all edits. We also welcome community members to create Issues on Github with questions about specific sections!

Confirmed, but not immutable 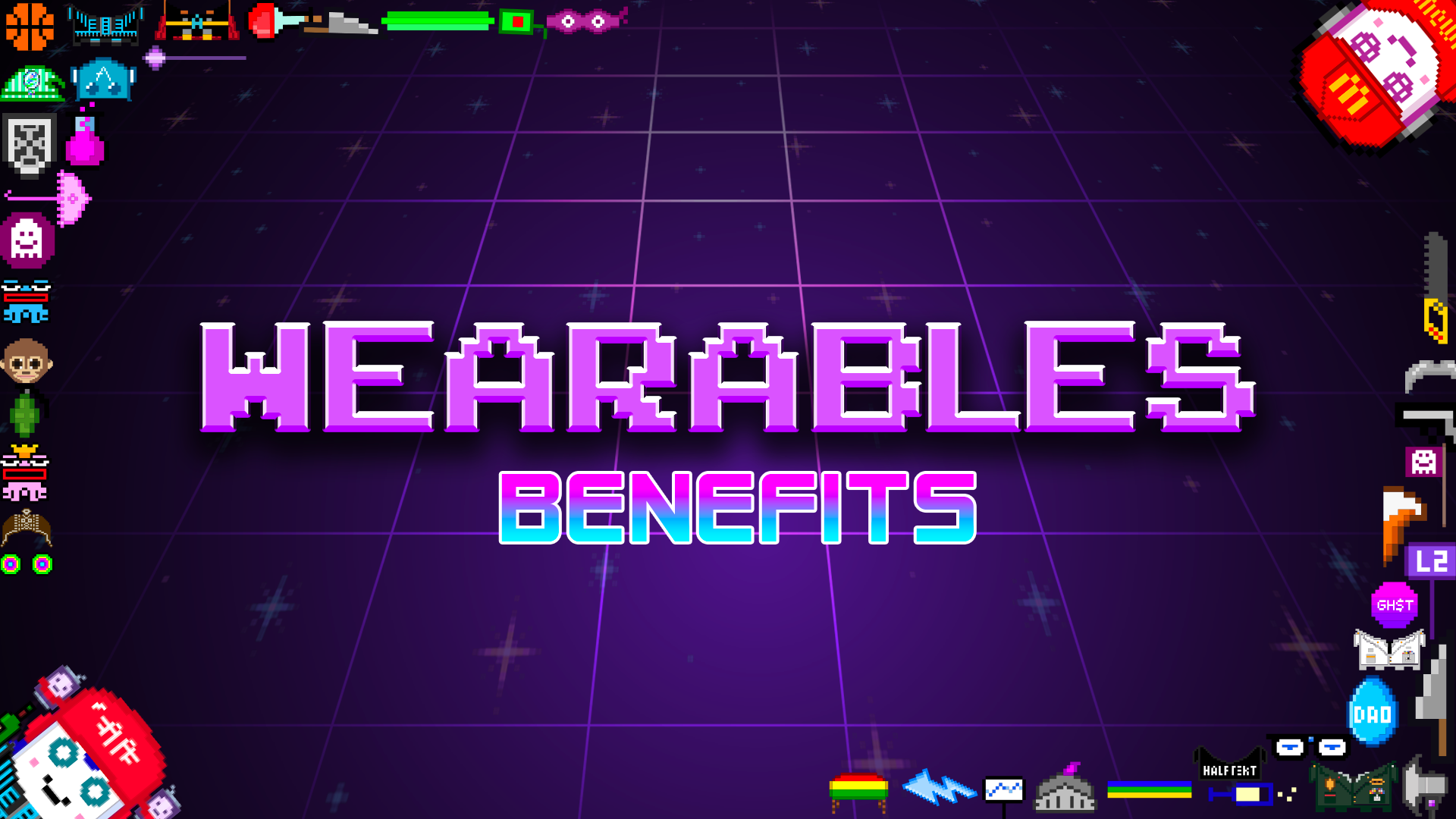 Wearables are an integral part of the Aavegotchi NFT Protocol, and the Gotchiverse is excited to build on that foundation by adding specific benefits for each and every Wearable within the game.

The Benefit Pool is an in-game mapping of all potential Benefits that can be applied to an Aavegotchi. As the Gotchiverse game is developed over time, more Benefits can be added by the community, further increasing the amount of available Categories.

The current Benefit Pool is taken from the Wearable Abilities section of Chapter 3.

Categories are in-game metadata assigned to each Wearable, designed to group them into memorable classifications. Each Category has up to twoBenefits selected from the Benefit Pool.

With this framework, each new or existing Wearable can first be assigned a Category, and the appropriate benefits can be applied based on the benefits specific to that Category, combined with the Rarity level of the Wearable (common, uncommon, etc.).

This allows us to easily scale the Wearable creation process, by assigning existing Categories, or creating new ones, as the Benefits Pool grows.

Now let’s dive in and look at each Category! 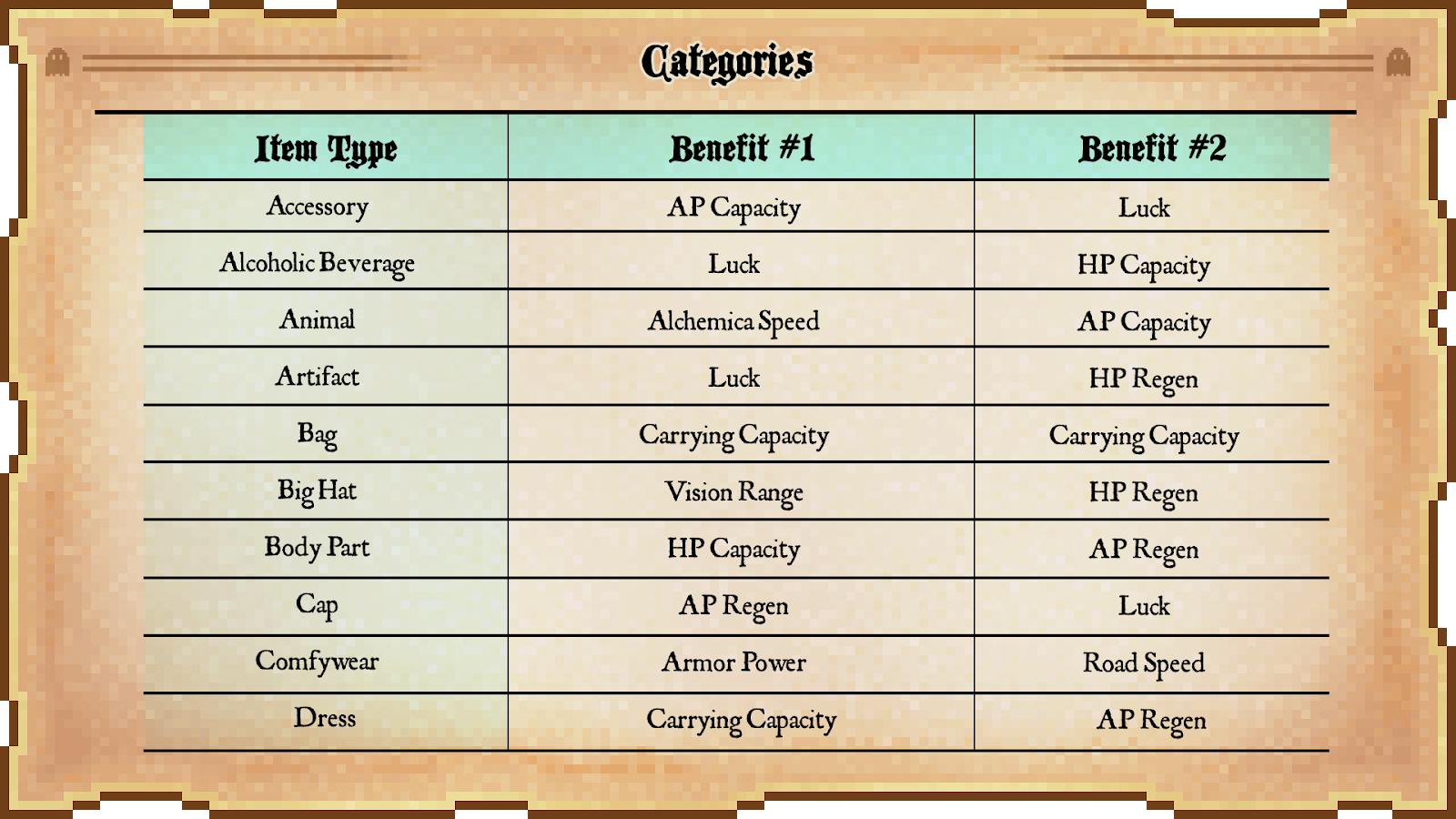 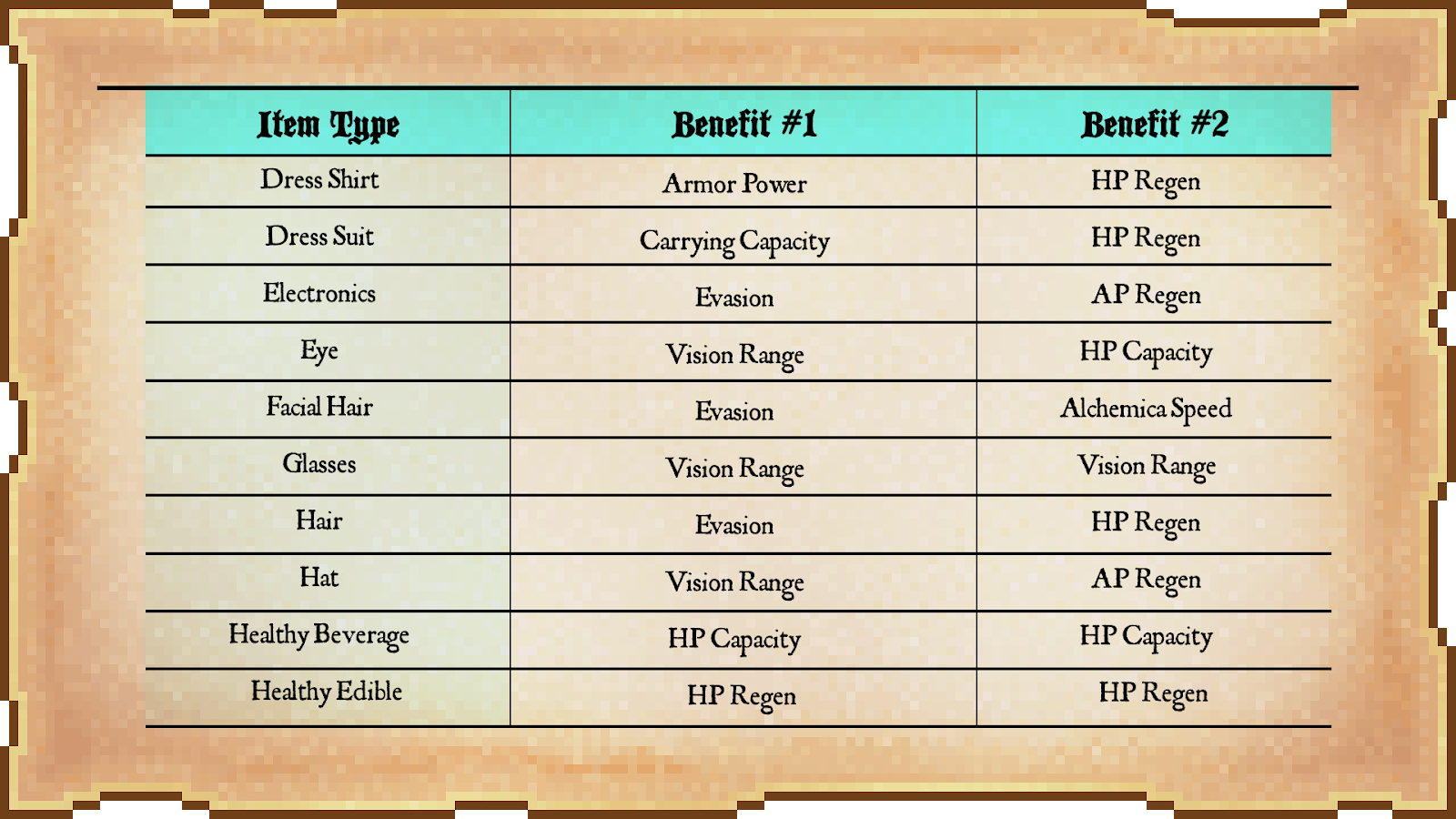 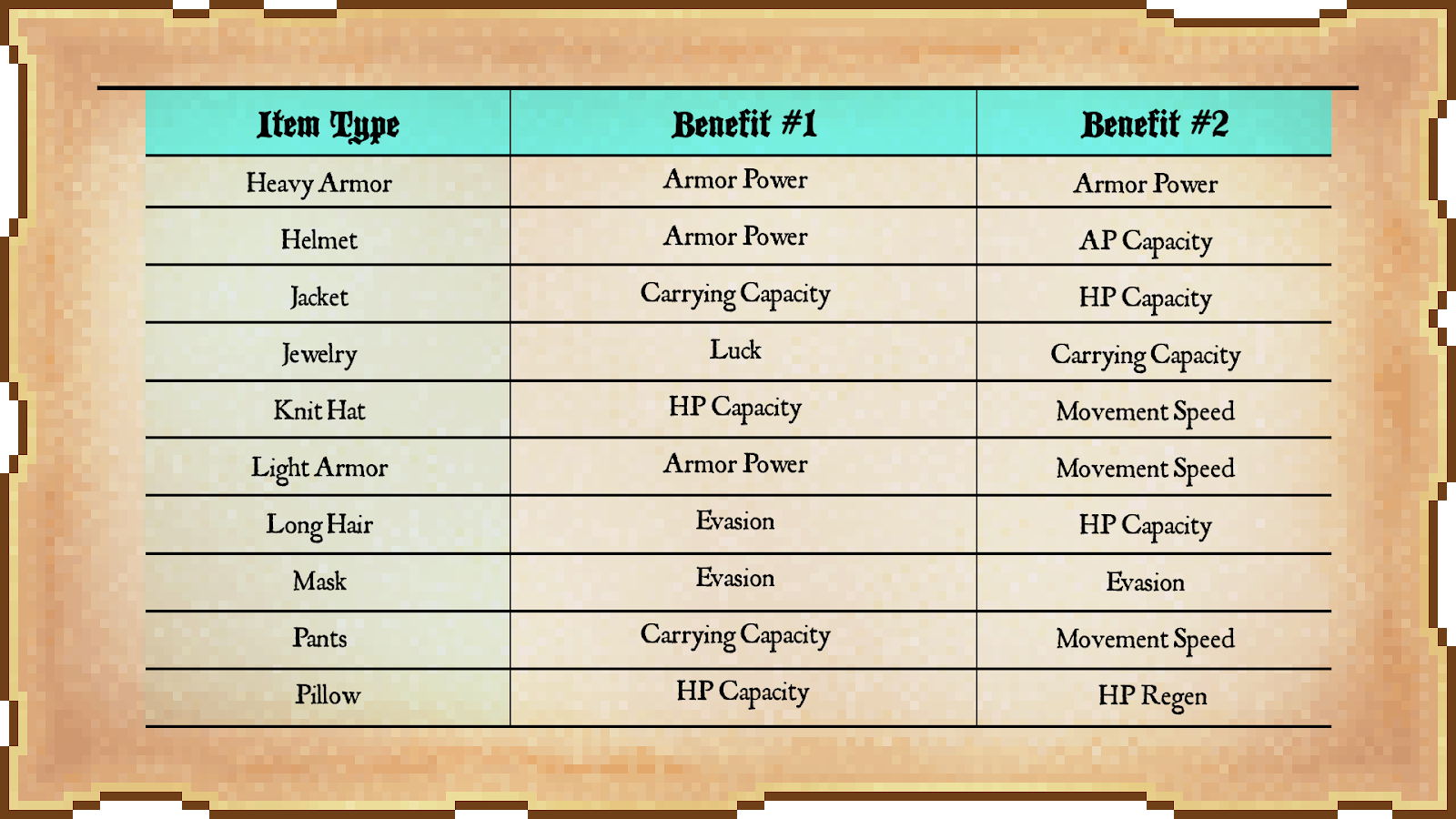 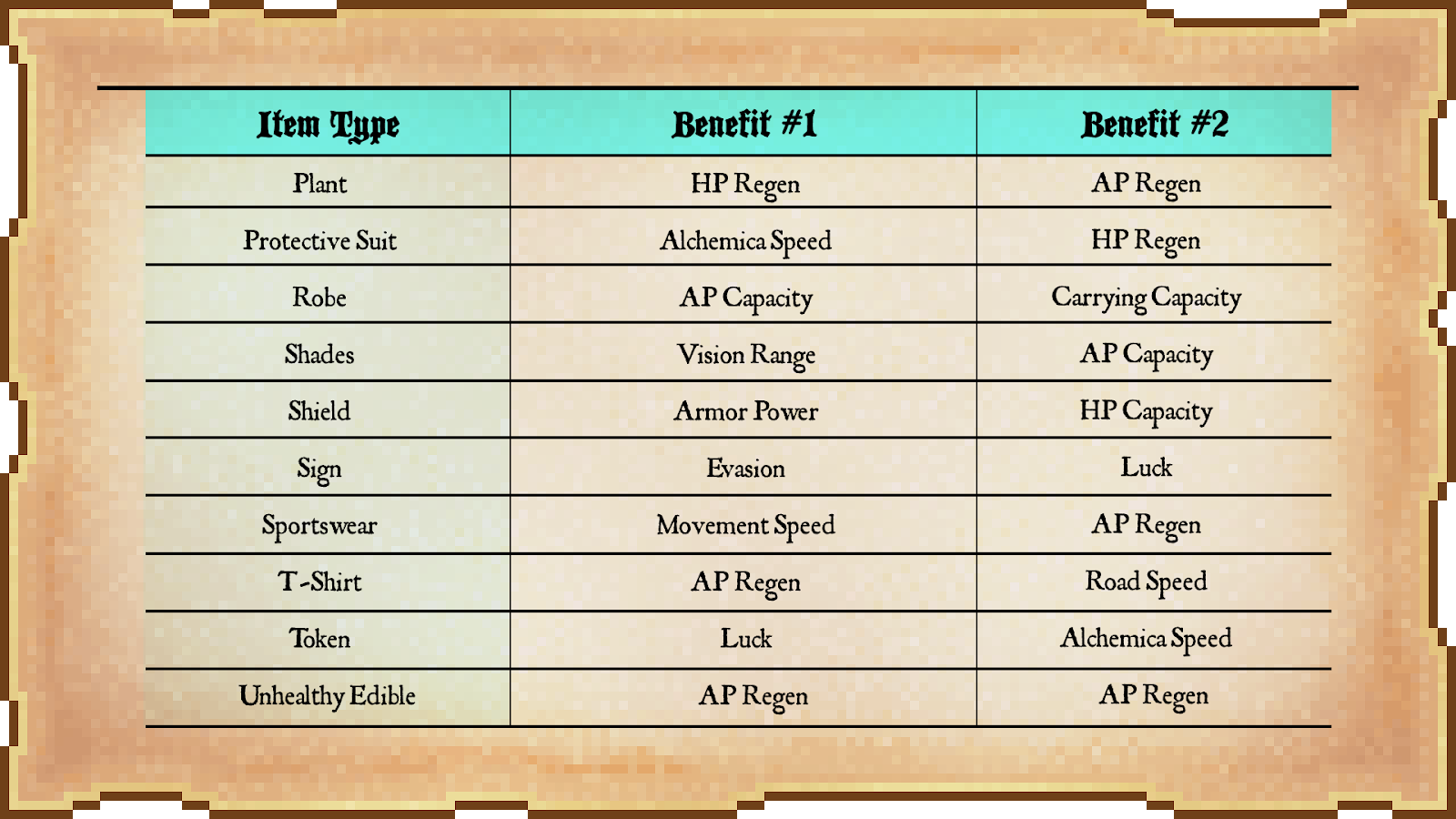 Certain Wearables have also been selected to be used as Weapons with the Gotchiverse.

Weapons are hand wearables classified either as Melee or Ranged Weapon. These special Wearables can inflict damage upon Gotchis (in the Aarena), Lickquidators, Enemies, and Waalls.

Each Weapon will also be endowed with special benefits, such as extra damage to Waalls, extra damage to Lickquidators, extra attack speed, and others. Look for this information in a future Bible Chapter!

Below is the list of all Wearables that will be usable as Weapons within the Gotchiverse. 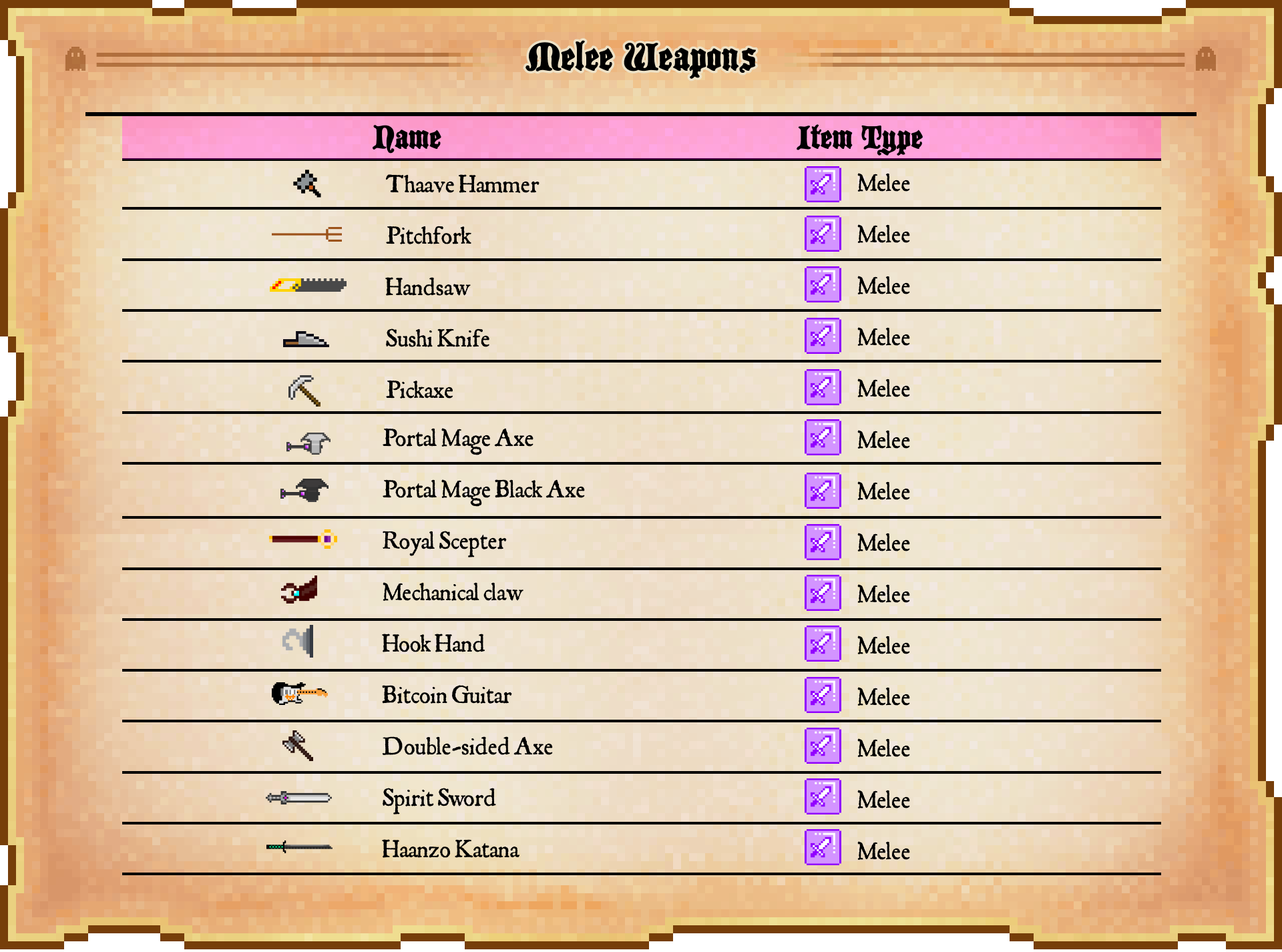 There are too many Wearables to include in a single blog post, so we have created a separate spreadsheet and PDFs with full information on Categories and Wearables.

Confirmed, but not immutable 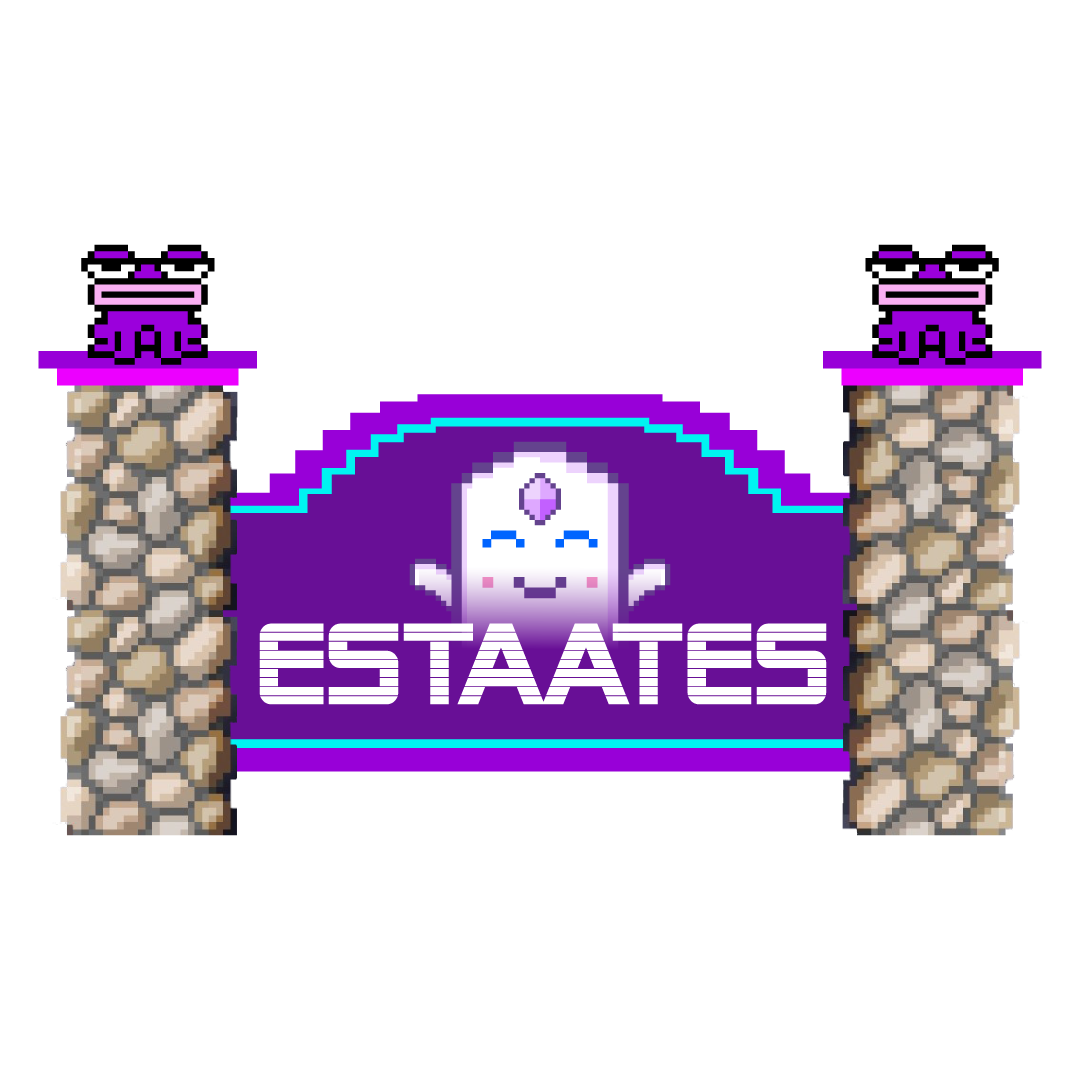 Do you dream of being a Gotchi Baron or Baroness? Then Estaates are for you, fren!

A Gotchiverse Estaate is two or more REALM parcels linked together via an in-game linking system. Linked parcels allow building Waalls along the edges so that multiple parcels can be fully encircled to help prevent intruders.

Estaates are perfect for Guilds or owners with large holdings, as they allow for privacy, protection, and convenience.

Now that you’re ready to start building, let’s look at some of the rules for Estaate-building!

One of the tangible gameplay benefits of creating an Estaate is the ability for the owner to encircle the Estaate’s perimeter with Waalls. The rules below detail how Waalls can be added in a way that will create “Connection Waalls” – in-game walls that connect to form a perimeter, even if there is space between the two parcels.

There are many possible parcel configurations, not all of which can accommodate creation of Estaates. The following walks through a number of these possibilities to give you an idea of the rules for Estaates.

For the following diagrams:

An owner can link 2 or more of their parcels together when they are close enough, even if there is ground Alchemica in between them.

Linked parcels display an outline around them: 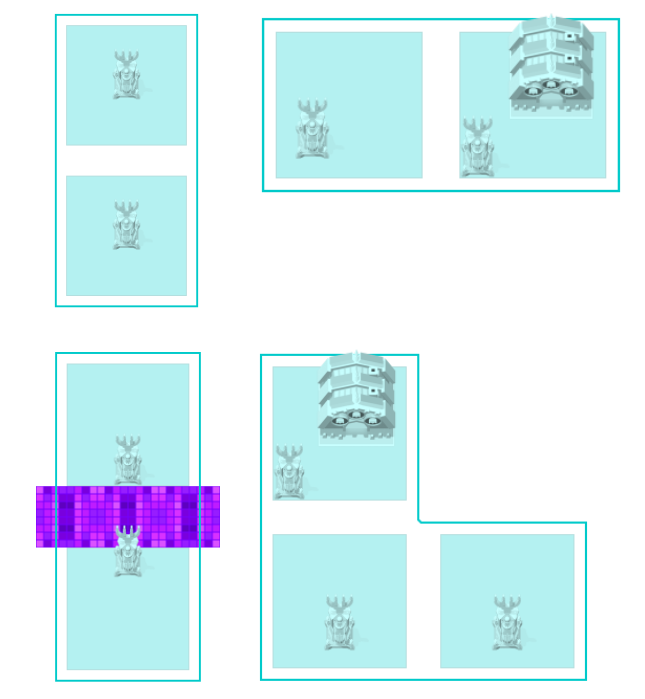 If the parcels are too far apart, have a road in between them, or an unowned or other-player-owned parcel exists in between, the parcels cannot be linked. 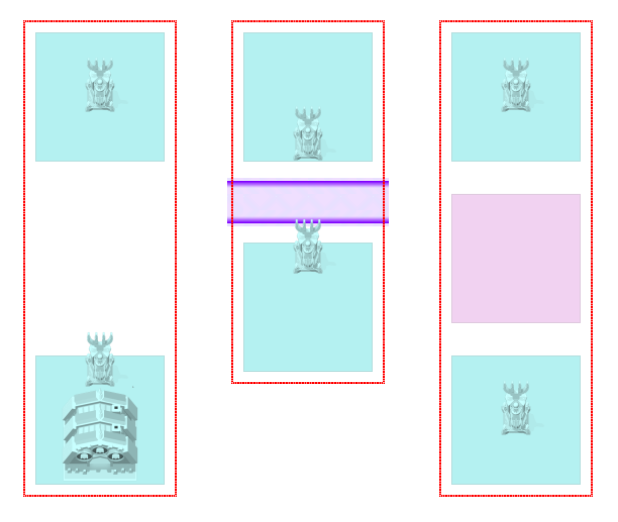 Note: The red lines indicate desired links that are considered “invalid” and would thus not occur.

If parcels do not share an edge they cannot be linked.

The two teal parcels cannot be linked in either of the above examples.

If a sequence of linked parcels will trap other parcels then an opening will always be left to allow movement in and out.

Trapped parcels above are a neutral (unowned) parcel and an other-player-owned parcel, respectively.

There can be many trapped parcels, but all it takes is one to require an opening in the linking. 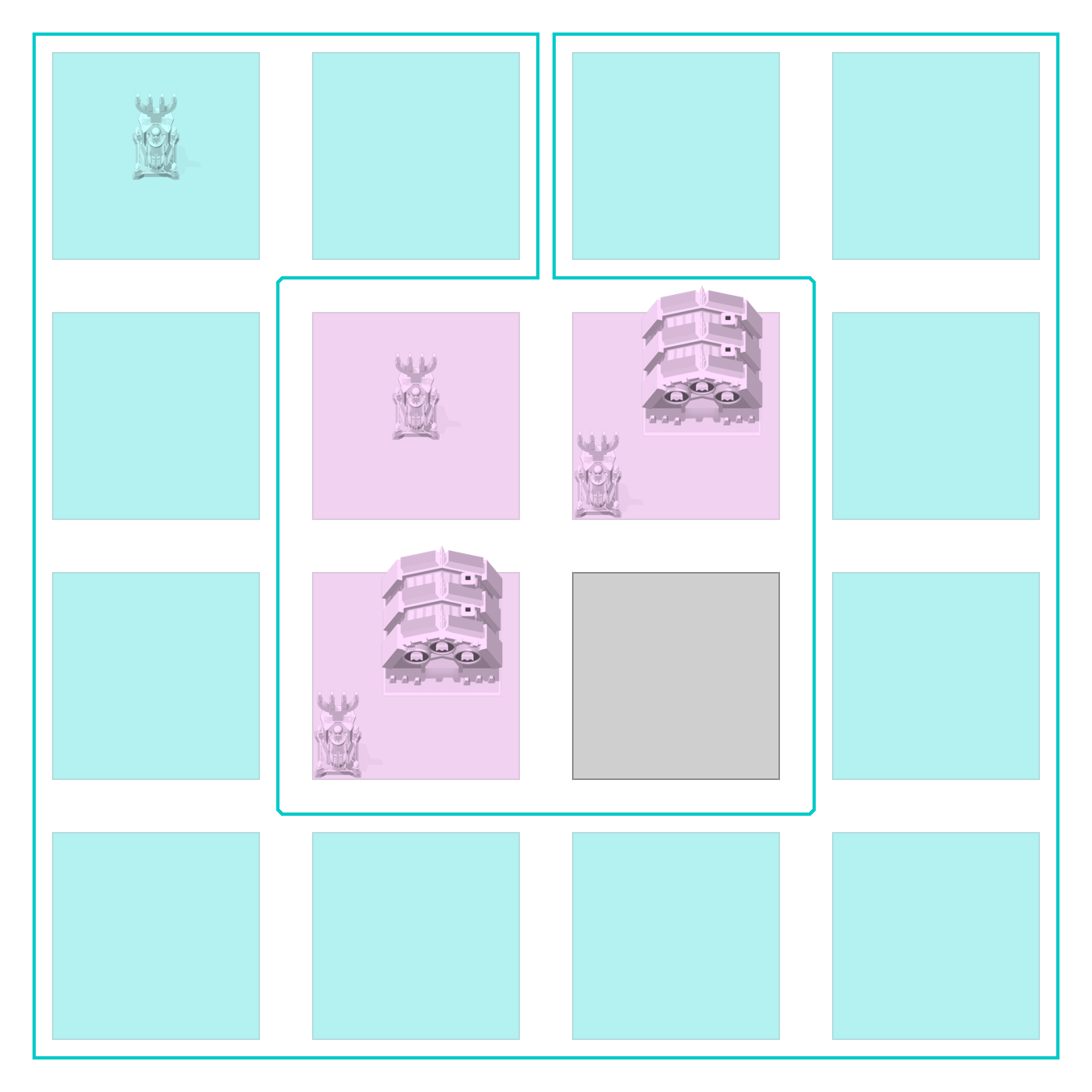 An owner can always add a new parcel or parcels to their Estaate, as well as remove one or more, and the game will recalculate the linking.

One of the tangible gameplay benefits of having an Estaate is that the area between links can automatically create “Connection Waalls.”

Connection Waalls are treated as normal Waalls for purposes of hit points and damage. 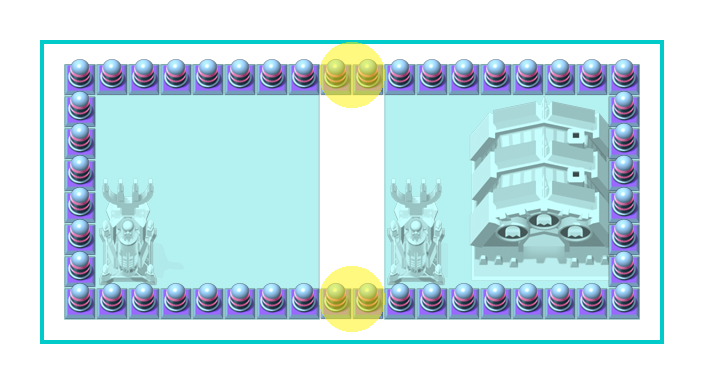 The 4 Connection Waalls above would not be crafted or equipped, but would automatically be generated by the game. 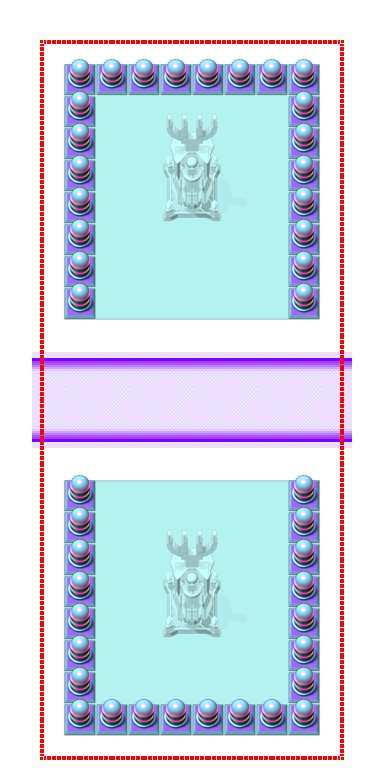 More examples of how Waalls would manifest: 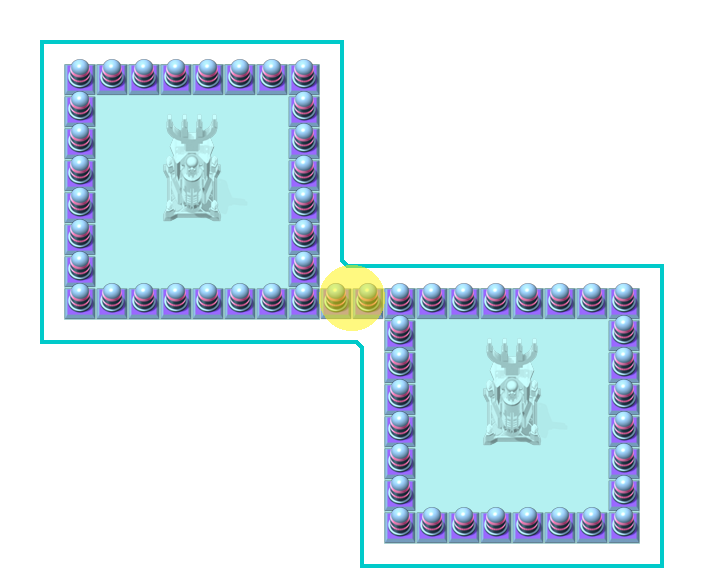 Since the above linked parcels share 1 Gotchi distance, only a single Waall is created over the link comprising 2 Waall sections as shown. 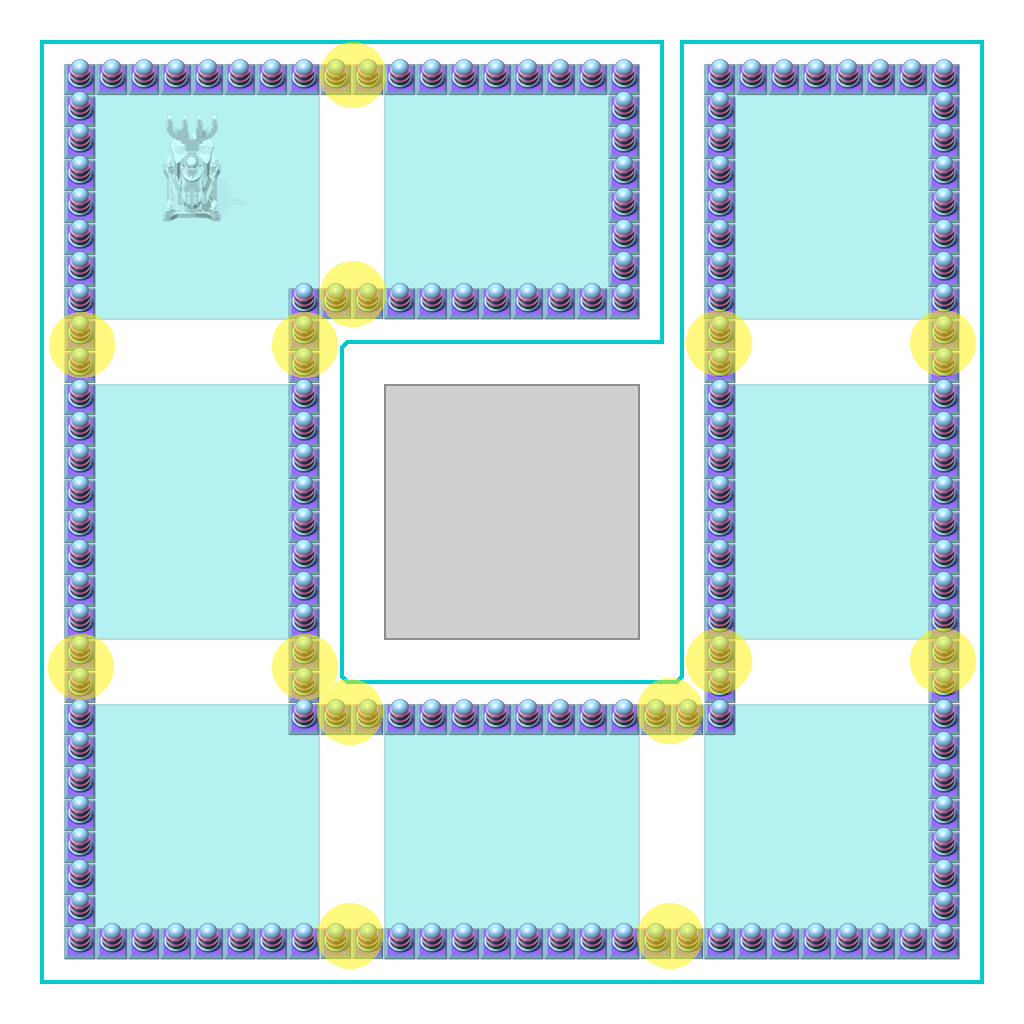 In the case of trapped parcels, Waalls can be created, but no Waalls will bridge the opening left to allow movement for trapped parcel(s).

The game will always try to create the opening on the north side of an Estaate if there are trapped parcels within it.

If the Waalls created on either side of a Link are of different levels, the game will choose the lower of the Waall levels to generate as the Connection Waalls over the link.

In the above example, there are level 1 Waalls (purple base) and level 4 Waalls (red base) shown.

To create this set up, the owner would have needed to first equip a level 1 Waall in the top (to the left of the link), with a level 4 Waall to its right (to the right of the link) . This would result in the top Connection Waall section of 6 Waalls at level 1 (the lower of the 2 levels).

Notice below it that there are level 4 Waalls on either side that result in a level 4 Connection Waall section in between them. 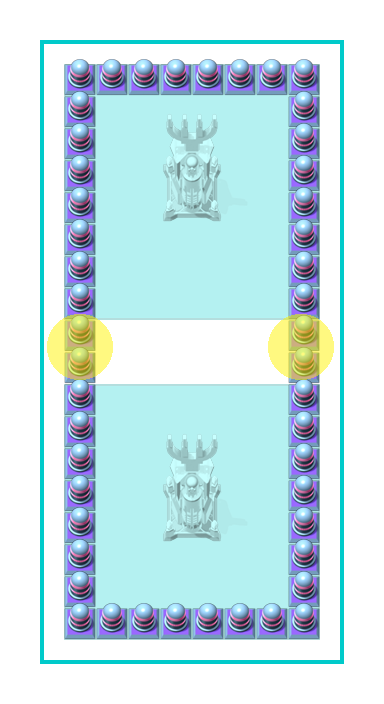 The above example has the same equipped Waalls on the left and right, resulting in level 1 Connection Waalls being created over the links.

If the owner unequips relevant Waalls or upgrades them, the game will recalculate the connecting Waalls to create.

If a Waall within a Connection Waall is destroyed, a hole will remain until the owner either upgrades or unequips one of the Waalls on either side of the link.

Link Up With the Lodge

The above functionality and benefits are tied into the LODGE Installation. The following defines the related Lodge level-up progression. 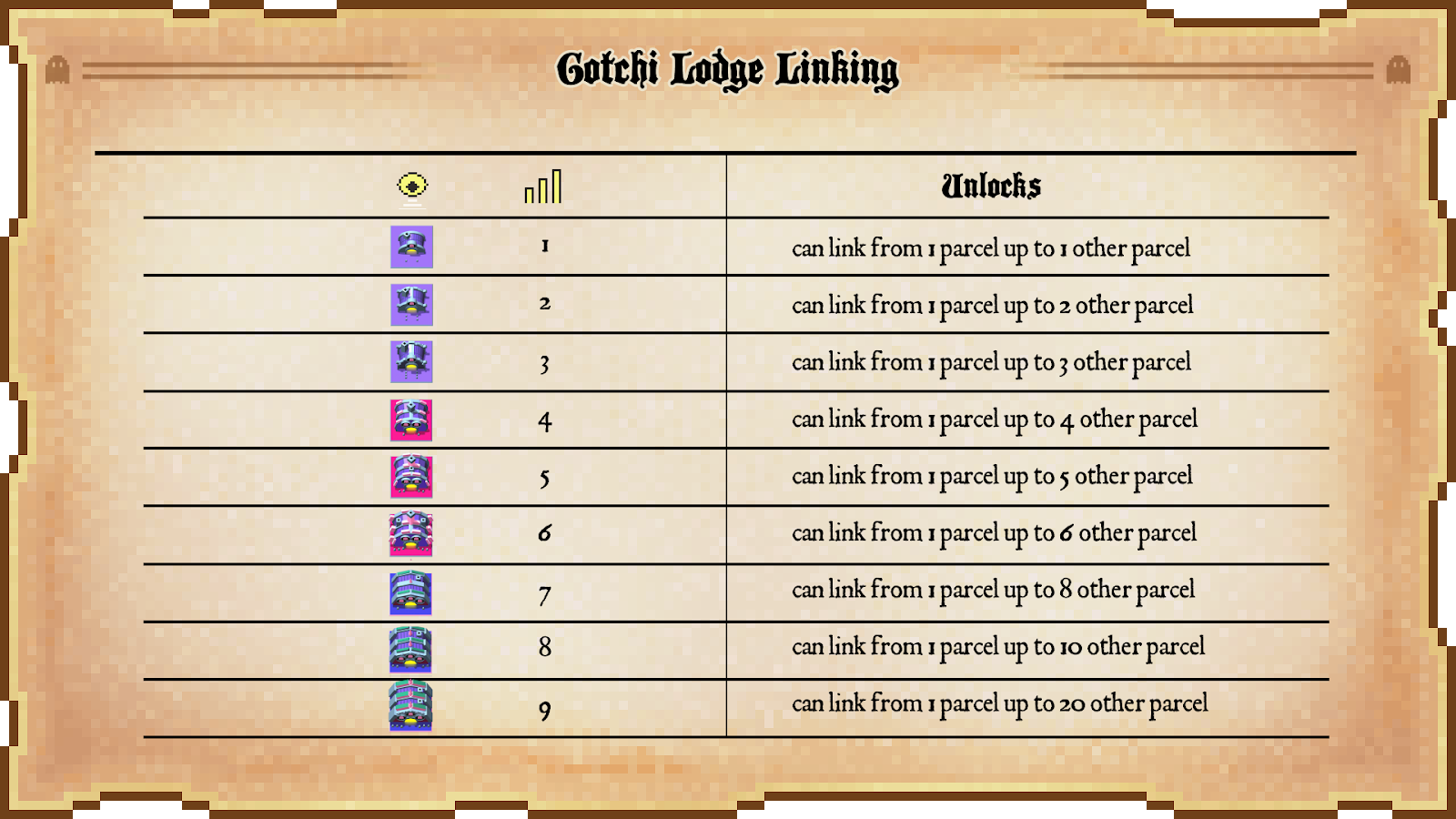 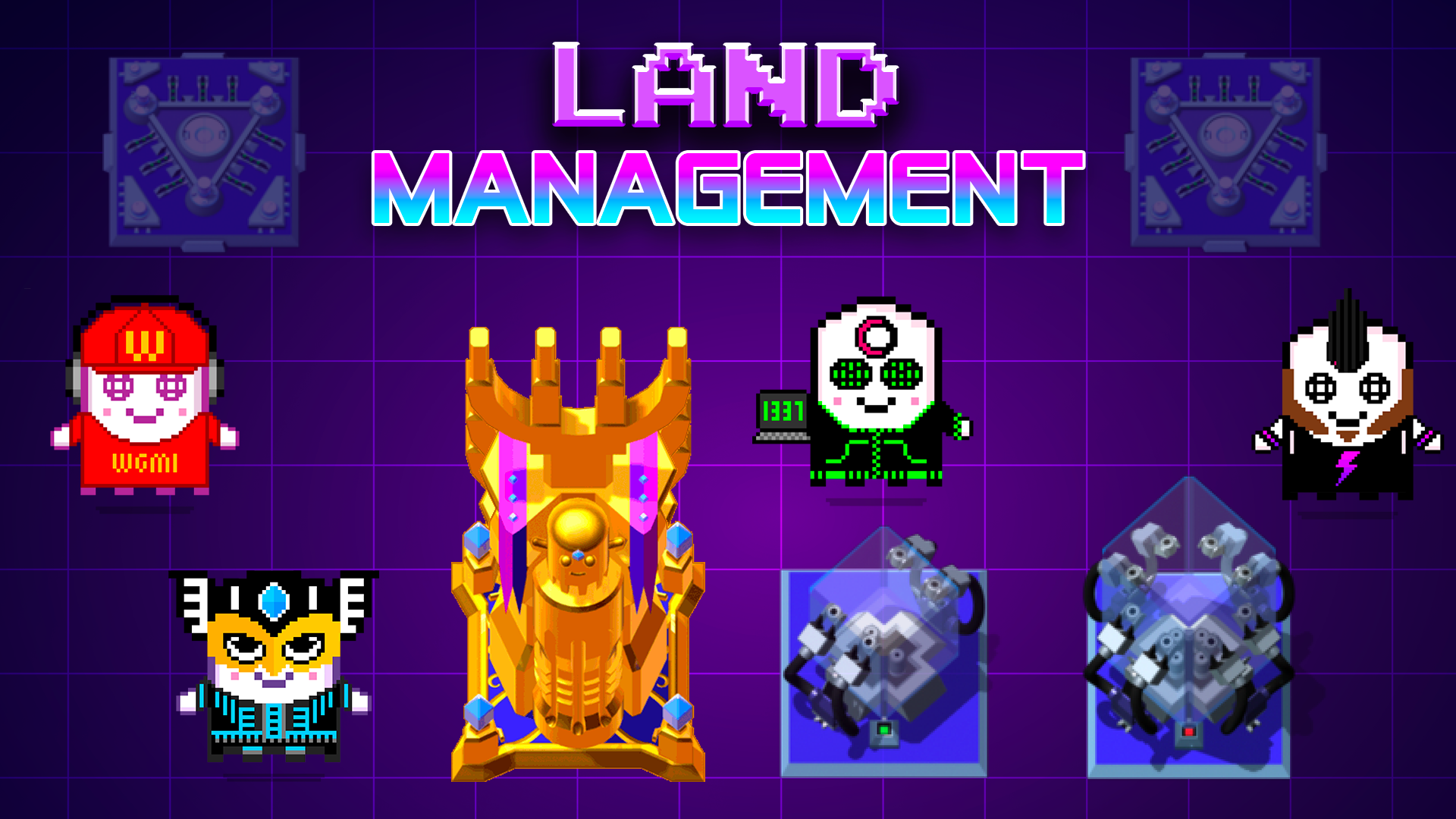 Land Management is a core aspect of the Gotchiverse, as how well you manage your parcel will determine how successful you are in the game. This section covers essential information that will help you make the best choices in your journey to master your yield!

Build Faster with the Maaker Installation 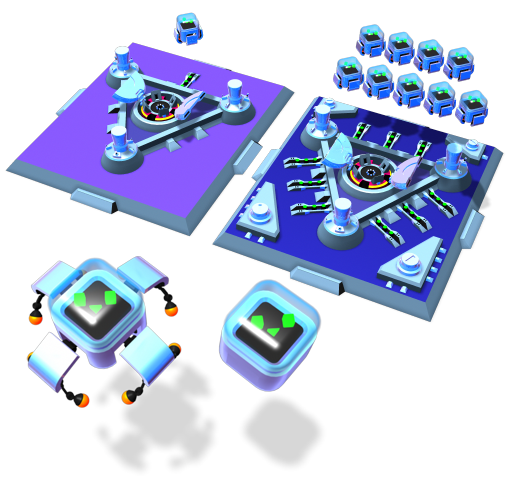 Image above depicts Maaker Installations levels 1 & 9, along with a close-up of a Maakerbot. To prevent repetitive emptying and excess load on the Polygon blockchain, each Parcel can only have its Reservoirs emptied every eight hours.

The timer begins after a successful emptying transaction occurs, and will not be reset by equipping or unequipping Reservoirs. However, spending (burning) GLTR can reduce the cooldown.

Action Access Rights are onchain permissions that can be applied to various important actions pertaining to land management. Initial releases of the Gotchiverse may not support these Access Rights, but they will be added in over time. The main three ACTIONS are:

For any of these ACTIONS, the parcel OWNER can set one of five granular permissions:

The parcel OWNER will be able to use a batch function to apply changes to multiple Parcels at once.

In addition to the Action Access Rights, ACTIONS may also have their own unique rights that can be set by the owner.

If Options 2, 3, or 4 are selected, the OWNER can also activate a reservoirSplit parameter which controls the % split of post-spillover Alchemica towards the OWNER and the GOTCHI POCKET of the Aavegotchi that made the transaction.

Initially, only the owner of a parcel will be able to upgrade Installations.

Delegation will be possible through future upgrades.

Expect this section to grow as more Access Rights are added!

Since the previous Chapter, we have added three new Recipes to the Recipe Book! 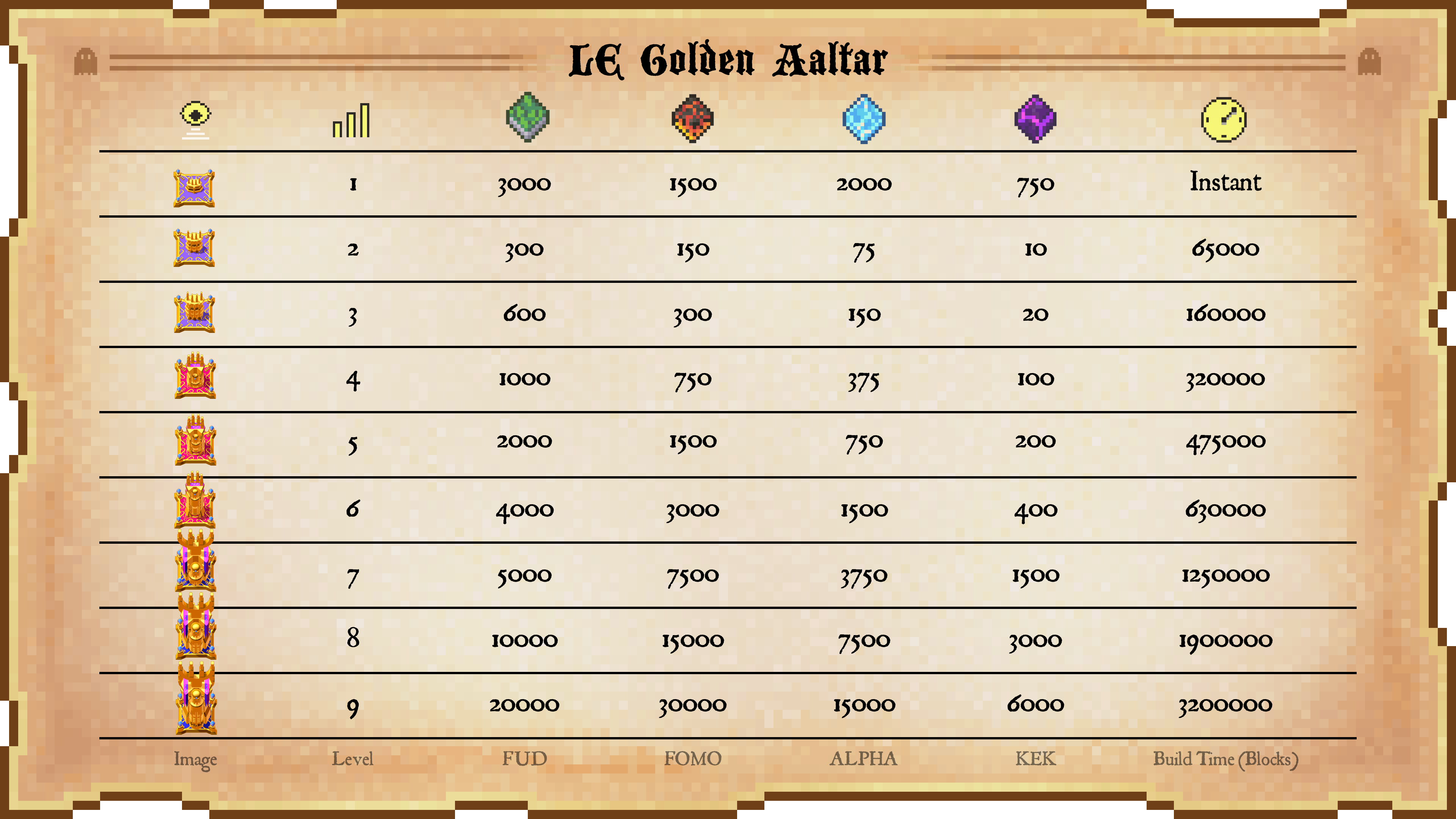 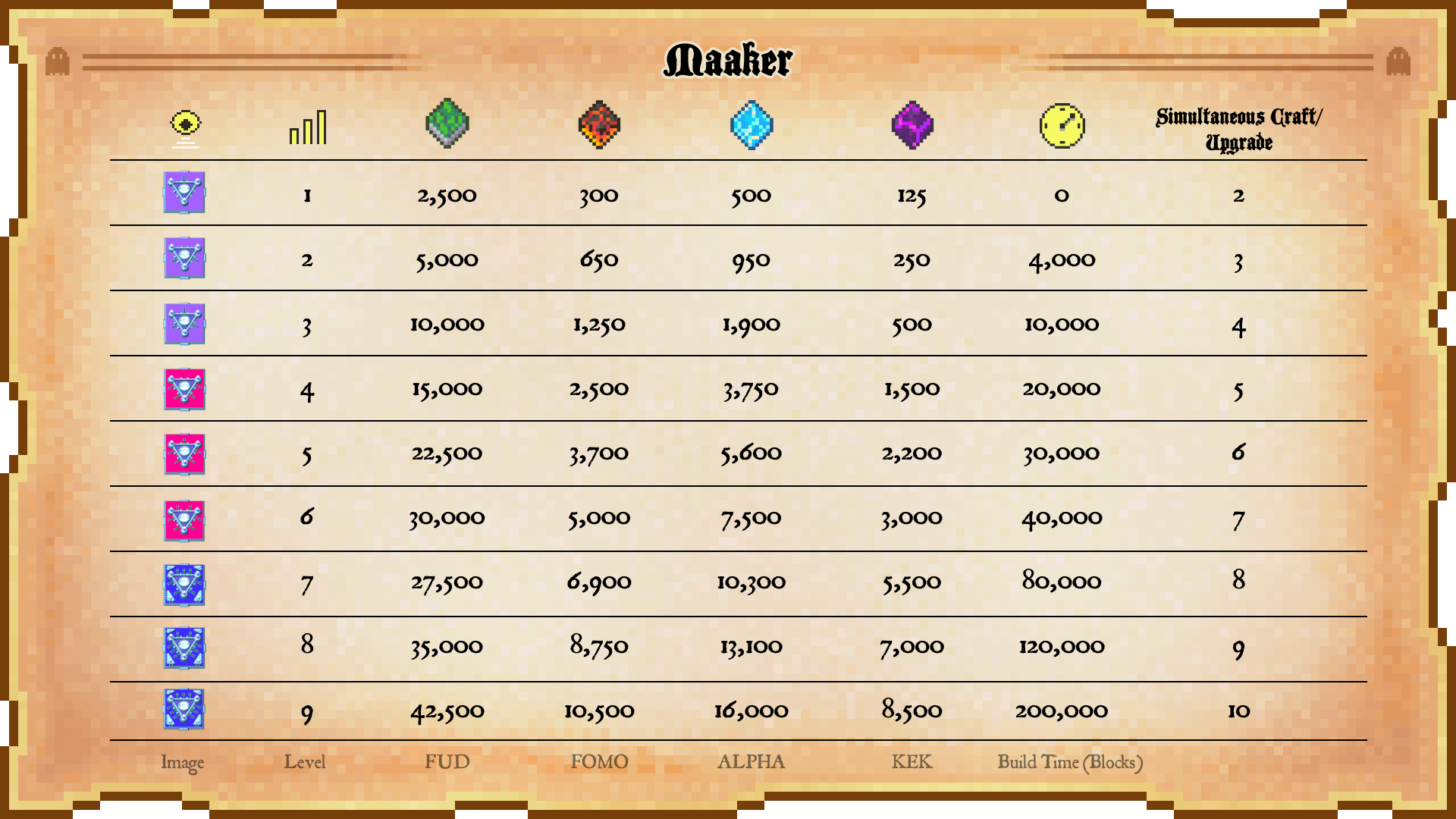 That’s it for this fourth chapter!

View the full Gotchiverse Bible on Github, where you can view its progress, track changes, and ask questions.

The Gotchiverse is Pixelcraft Studio’s flagship title that celebrates the best of blockchain technology. The metaverse is built on Aavegotchi, an open-source, community owned, NFT gaming protocol that unlocks true asset ownership for gamers. In this spirit, The Gotchiverse is co-created with direct input from the community via AavegotchiDAO. Summon your first Aavegotchi today and meet us in the Gotchiverse!