Anchor Protocol: A Lending Protocol on the Terra LUNA Blockchain with an Insane Yield
MyCryptoOutlook2022 BitYard Contest and Giveaway - $1,200 in ETH Prizes! >> JOIN FROM HERE << 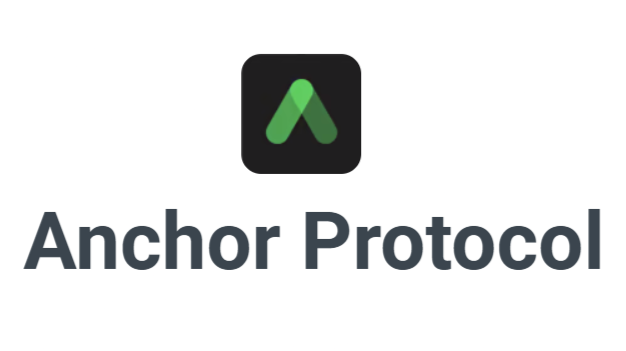 Anchor Protocol: A Lending Protocol on the Terra LUNA Blockchain with an Insane Yield

What is Anchor Protocol?

Anchor is a lending protocol running on the Terra LUNA blockchain that offers a stable yield of 20% for the UST stablecoin. Yes, 20% and this yield is stable for the long term! Anchor accomplishes this by using the collateralized assets to let the lenders earn more.

Regular crypto money markets like Aave, Compoud and Venus also offer collateralized loans but their interest rate is set by the supply and borrowing demand for each asset. For example, if more USDC is deposited, the interest decreases and if more USDC is being borrowed, the interest rate for it will increase. This means that the cycle of the crypto market effects the interest rates. If the market is bullish there will be demand for depositing ETH and borrowing USDC for things like leveraged trading and if the market is bearish nobody will want to use ETH as collateral to borrow USDC. Since the market is very volatile you will sometimes earn a high yield on stablecoins and sometimes only a low one, this can change on a weekly or even daily basis.

The developers of the Anchor Protocol believe that regular people need to have more stability and predictability for their savings. That’s why they developed a protocol that gives them a high but also stable yield and they hope that Anchor will become the benchmark of crypto interest rates that other projects base their goals and rates on. 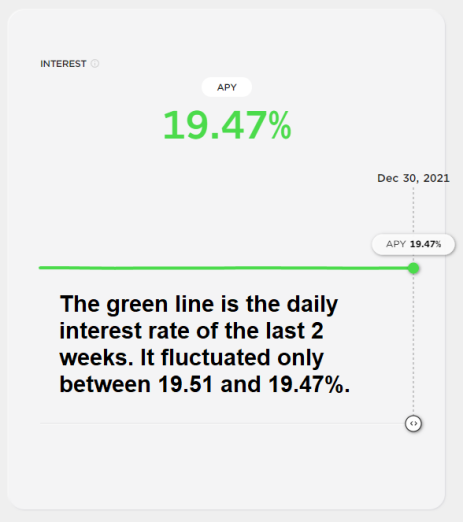 Like with Compound, you need to leave a collateral if you want to take a loan. Currently you can only use LUNA and ETH but other popular staking coins like ATOM will be added too. Before you can deposit them you need to swap them for a bonded version of the coin that are called bAssets. Such bAssets are basically tokenized staked coins, the coins you just swapped are being staked by a smart contract and it distributes the staking rewards to bAsset holders that means that bAssets give the same rewards that your coins would give you if you staked them but the advantage is that they are still liquid and can be traded.

Once you leave bLUNA or bETH as collateral, you can borrow up to 80% of their value in the UST stablecoin. The smart contract will collect the staking rewards, swap them for UST and distribute it to the lenders of the borrowed UST, this is how the high yield is achieved. Anchor is using its collateral to calculate the predictable staking rewards of the next 12 months and tries to give a constant yield for this time, this means that if some days the rewards are above the targeted average it will put some of the rewards aside for the days were the rewards are lower than the average. This is how the APY only fluctuated between 19.51% and 19.47% over the span of 2 weeks.

Borrowing can have much lower interest rates because the staking rewards can cover the interest for the lenders at least partly, but only if there are enough bAssets in the protocol. This isn't the case right now and there is actually a rather high APY for borrowers of 17.88%. The developers knew that this would happen initially that’s why there are ANC rewards for everyone who takes a loan. The extra token rewards lower the total borrowing APY to a decent 1.21%. 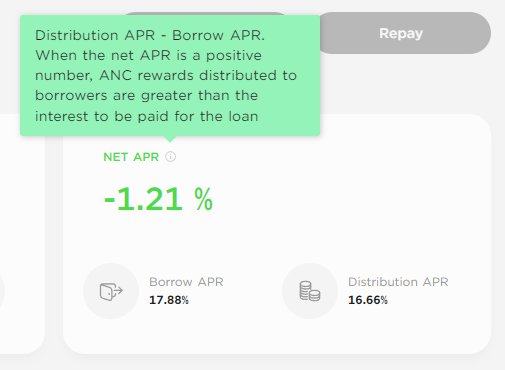 ANC is the governance token of Anchor and it is used to vote on possible changes to the parameters and on which new collaterals should be added. It is also used as an initial incentive for borrowers because the APY for loans would be rather high in the beginning without it.

The token also lets its holders earn a portion of the Anchor yield. The protocol aims for a 20% yield for UST lenders, if it manages to make even more than that it will distribute some of the extra rewards to ANC stakers. 1% of the liquidation of failed loans is also given to ANC stakers. This incentivises the token holders to use their voting rights to improve Anchor further so that they can earn more. The rewards for ANC stakers will be swapped and distributed as ANC tokens, this gives the token constant buy pressure from the protocol.

There is a max supply of 1 billion tokens. 150 million ANC were instantly distributed at the genesis and the remaining 850 million is slowly distributed over the next 4 years. 20% of the total supply were sold to investors, the developers got 10%, LUNA stakers got in total 15% as an airdrop, 40% are given to borrowers, 5% can be earned by supplying liquidity to the ANC/UST trading pair on Anchor and the remaining 10% went to the community fund that is governed by ANC holders. All in all the supply of ANC is well spread and plenty of it went to users of ANC and the Terra blockchain. The token is highly inflationary for the first 4 years as more tokens are unlocked but there will be no further inflation after that.

ANC will rise in value if more funds are in its smart contracts, not only because governance rights will become more valuable but also because the protocol will constantly buy tokens back to reward ANC stakers. Constantly earning 20% on a stablecoin is insane and could attract many users. However, if the protocol fails to give low interest rates for borrowing after the distribution of ANC is over it could fail massively. There is also limited exchange support and only a few big exchanges like MEXC and KuCoin offer it.