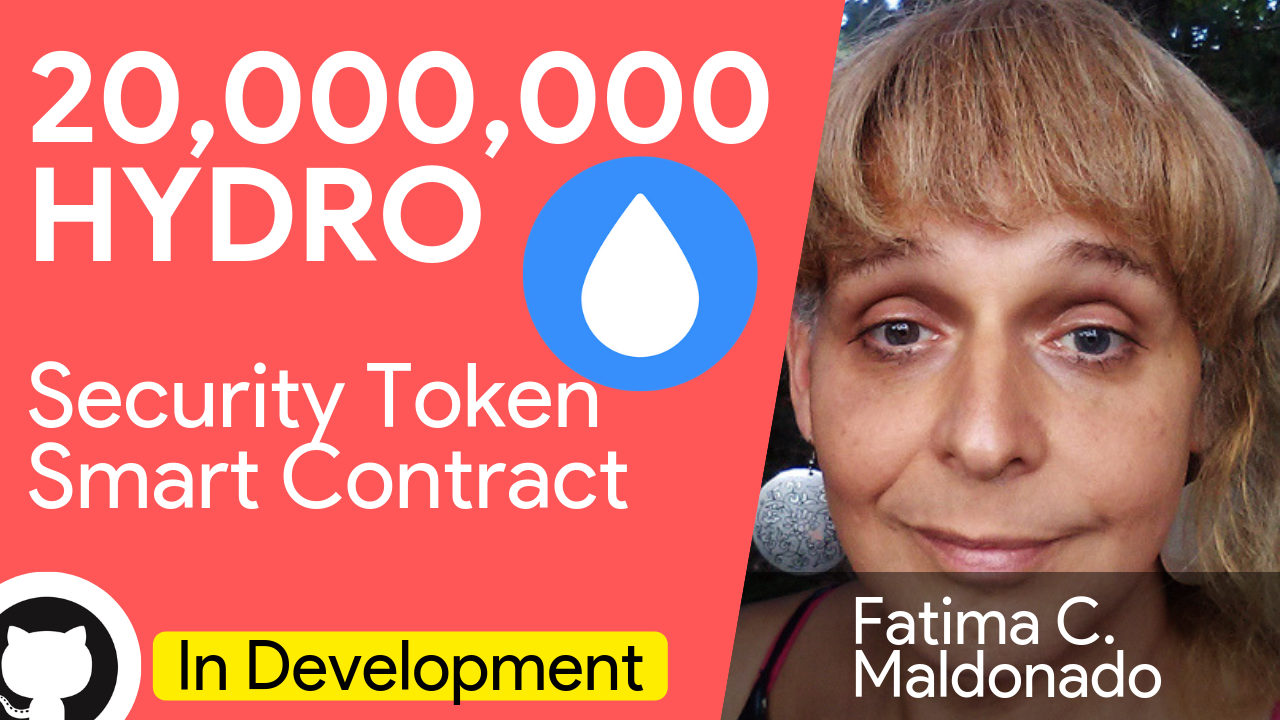 I interviewed Fatima who is working on the largest bounty attributed by the Project Hydro. Currently HYDRO has 12 missions open offering a total of 21.900.000 HYDRO Tokens for developers. It represents a total of approximately $35.000 at the time of writing. If you don't know what Hydro is, this article summarizes it pretty well.

Fatima has got the attribution to complete the biggest bounty from HYDRO with a potential reward of 20.000.000 HYDRO. It consists of creating a Security Token Smart Contract (more detail about the bounty here on Github)

In this short Interview with Fatima, we'll learn more on Project Hydro from a developer point of view and get the details of the mission. Fatima also explains her story about how she first heard about Bitcoin in 2013.

Can you tell us more about your background and the bounty of 20 millions HYDRO?

Yes, we got a nice practical experience with cryptocurrencies, a couple of years ago we ran our brokerage for our clients, we set it up and we ran it for the first 2 years. And we've seen many common people, (not tech guys, not developers, not crypto funds, just common people trying to send and receive money using cryptocurrencies. That gave us a nice feeling of how real life is about (outside the crypto savvy crowd) and about the complication and limitation in crypto.

So when we discovered the Hydro project and started to read about it, we realized that it's pretty interesting because yes it's kinda wried that people need to own these addresses (private key, public keys) to do a transaction. The Banking system may be old, but it has something that is something that people are used to it. You're a person and you have accounts.

And one of the thing that hydro does, it's something like that. You can have an identity and have your "You" Basically. And you have accounts, so we said this is good, this is practical. So we were interested in it and we offered to participate.

But the reality is that some time passed and we were thinking "yeah we didn't get it... it's over". After a month, two months maybe this is most probably over we mostly forgot about it. and then after a month of silence, an email came saying.. "This project is for Fatima and her team" So yes it's a nice opportunity.

How much are worth 20milions 💧 hydro today? And what is the timeframe for it?

Last time I checked it was around $33.000. They ask two months for it, we think it's quite reasonable, it may take us a bit more but it's a reasonable timeframe yes.

How do you feel about it now is it as you expected? More or less difficult than you thought?

Oh, we are going quite fine! We've read the requirements before to start so we already knew what we were going to find, so yes we feel good about it. We're currently coding a prototype, deciding things like the architecture diagram and we're almost happy with it. We'll show it to the Hydro team in a few days and after that, if we agree on the big things we'll start adding details, signature, and other things.

Your company is called "Ethernity live" what is it about?

Yes - we are doing development for 6 years - Anything related to mobile application development,t website, web app. However, 90% of what we do is directly related to the blockchain.

How many developers do you have in your team at the moment?

Are you going to HODL the hydro tokens or do you plan to sell when you get them?

The reality is that we always try to save a little bit of each crypto we're paid in. But well, most of the time we're not in a position to keep it all. Because we get running expenses around, so it's not possible, I would love to keep it all, we may keep 10% or something like that.

What is the main role of this token for Hydro?

The idea is to create a platform where many people, many entrepreneurs can come and issue securities to a startup business. It's a platform for creating securities on the blockchain without the complications.

So you can easily create your securities tokens on the website in a few minutes?

Yes in practice, it will be a bit different because there have been some problems with the ICO (Initial Coin Offering) because honest people that went broke because of poor very quality projects and some scammers abused the market. So regulators started hearing this and said it requires some more order.

So yes the idea of an assistant like this is to bring the possibilities to create a token in a few minutes. Of course, you'll still some things that take more time like a legal advisor, anti-money laundering regulation or so, but it's easier to and less expensive to do it on the blockchain than by using the traditional system. The technology is sound, really once you used crypto two or three times, you come to see that it works.

When did you start to hear about bitcoin and why?

Part of my work is reading the news, I always do it even when I have too much work I'll read 20 minutes per day. And then, one day in March 2013 (Bitcoin was at $50). One of the news articles I was reading at that time, was saying: "Bitcoin" and I said "Bit-What!? what is this?"

Six months after I had company and I was doing work for client internationally. Before that, I was doing local work, but using bitcoin opened up the possibilities of doing international work easily.

And regarding smart contracts do you develop yourself?

I code a bit yes when I can, it depends on the moment and the project and what we are doing. If I can I do it. I like to do it not all the time because I can't, but from time to time.

Do you think it's possible for non-coders to learn directly solidity?

I would recommend doing some other kind of programming a little bit to get the feeling, as a matter of fact, I wrote a book about blockchain programming. It has some nice explanation on how blockchain works. If you can program just 10 lines of javascript you can start.

Fatima's book": Introduction to Blockchain and Ethereum Transactions Decentralized " you can also connect with Fatima on Linkedin or her website

If you're interested in working with hydro, this article is listing their remaining bounty programs.

Hey!👋 If you liked this interview you might want to look @ViableToken. It's provided by me @Cyril with one goal in mind:🎙interviewing cool people from the crypto world and finding 🙌disruptive products. It's Free!🤑

🎙️Interview and presentation of people working on cool stuff from the 🔥 crypto space. 👉https://viabletoken.com/