Will copyright and blockchains find balance?

With the expanding use cases of blockchains, it's inevitable these two will start to clash. Firstly, I'm really only knowledgeable about United States intellectual property rights, so keep that in mind. Also, it's worth stating that intellectual property is entirely separate from the sale of the artwork. Owning the work and owning the copyright are two different things. My own opinion on copyright law is that it's waaaayyyy too expansive in every way and needs some slashing, but that aside...

While NTF are often touted as a pro-arts boom, a quick glance at rarible will dismiss that. There is extensive copyright infringement from straight rip-offs of others work, images of celebrities, and most commonly, derivative works - copying styles, graphics, and characters of well known artists into marginally new work. If you've heard you only need to change xx% to be fair use, you were lied to. While few may be fair-use, many more would not pass the test. Now I know you're probably thinking, but these are memes!

Where meme's fit in.

Memes are copyright infringement. Just because it's funny, doesn't make it a parody. There is a poor argument to be made that their pervasiveness makes them public property, but really there are a few simple reasons meme's are almost never prosecuted. 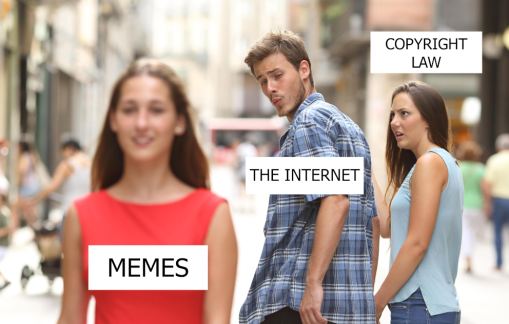 Once a meme becomes an NTF, however, every single one of these barriers is irrelevant or diminished. Now money is involved (sometimes a LOT). Now there is an explicit identity to target. And, now the image isn't spreading much. Companies/Artists don't have much incentive to let it go.

If U.S. history is anything to go by, it will be a hard fight. Music streaming is still an ongoing battle even though its resulted in huge profits. Even CD players got involved for anti-skip tech. (outcome -> buffering is legal.) Every new tech that starts taking money away (real or imagined) from the entertainment industry has this battle to go through. Just imagine if Napster was a blockchain file-service. (I'm not that old right? You know about Napster.)

With social media platforms entering the blockchain world, writing, photos, videos, and music will inevitably become a concern too. Everything substantial, on-chain that can be called a creative expression falls under copyright law. The blockchain makes it easy to find the infringing source and hard to delete/cover your tracks regardless of what you've copied. In some cases it may be impossible to remove the infringing action. Since the blockchain is automatically distributed, will courts decide that's duplication and award extra damages? I hope not. It should count more like the buffering tech that copies in order to secure itself, not to widen distribution. However, it is fixed in a way that buffer streams are not.

Since the courts really haven't even begun to 'solve' copyright law issues on the internet it may be awhile before we have any answers. The DMCA is a hodgepodge of special cases - search engines (libraries?), cam girls (performance!) - and still needs work. The U.S. doesn't like to simplify copyright. We just keep adding band-aid after band-aid, while making sure Mickey Mouse is protected forever. 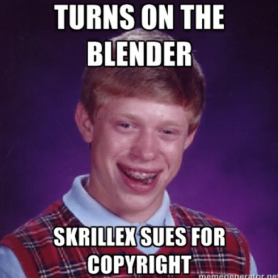 In closing., the Gershwin Foundation can eat a dick and I anxiously await this next fight between open culture and capitol incentives. If you've got good ideas for solutions, get your ass to law school because we need all the help we can get.

In-case you're wondering if what you've made is fair-use, Harvard law has a good, free course on youtube. MIT has one too thats geared more to the tech industry.