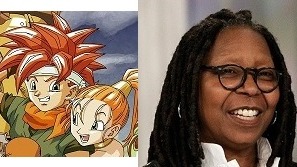 The Unlikely Connection Between "Chrono Trigger" and Whoopi Goldberg

Due to my brand of humor and the nature of my scatterbrained thoughts, my tweets on both my SFW and NSFW accounts tend to cover the gamut of emotions and topics. And the combination of my tweet history (which includes multiple references to erotic/pornographic retweets, repeatedly stating that jesus is as real as Yuuki Terumi, and using trolls' "logic" to prove that they eat shit) and my tendency to worry about everything make me wonder when a tweet will lead to being "cancelled" (even though "cancel culture" does not exist).

I never thought "slavery is bad" would draw as much ire as it did, but here I am:

As of 2022-03-25 12:06 MST, the stats on this root tweet are 65 replies, 96 retweets, and 737 likes. Last I checked, 737 - 161 != "ratio." However, there have been enough trolls responding to reaffirm my misanthropy and mute the thread. But there has been negative responses. Fortunately, the negative responses have been as intellectually bankrupt as they have been repetitive. Negative responses fall into one of the following categories:

I'm going to address the last category because it's the least intellectually-bankrupt -- and arguably most dangerous -- fallacy I've encountered. The premise is that modern-day people have no significant connection to the deeds of their predecessors. Judging from how much of a mantra it has become, merely reminding people that those who fail to remember history are doomed to repeat it won't be effective.

Thankfully, Square-Enix made a compelling argument back in 1995. They called it Chrono Trigger.

THE EVENTUAL END OF THE WORLD IS HISTORY

Chrono Trigger is a Square-Enix RPG first released for the SNES. One of the aspects that set it apart from other RPGs of its time was the time-travel mechanic. As the story progresses, the player gains more control over where and when (65 million BC, 12,000 BC, 600 AD, 1000 AD, 1999 AD, and 2300 AD) the playable characters can travel in the game world.

Altering the world's timeline for the better is a requirement not only to clear the game but to complete side-quests and equipment that will turn SNK Bosses into LOL Bosses.

Below is a minor spoiler. It's an outline for a sidequest to acquire two of the game's most powerful weapons: the Wondershot and the Rainbow (it's a katana that's more dangerous than it sounds):

Note that I italicized steps three and four. Compared to the three boss fights and the hordes of minions involved in this sub-quest, doing something nice and then jumping 400 years into the future seems pretty mundane. However, the point is that a simple act of generosity (1 unit of spiced jerky costs 9,900 Gold, and the villager will offer to buy it for 10,000 Gold) impresses the villager so strongly that she uses it as a morality tale which perseveres after 400 years.

Strip away all of the sci-fi and fantasy elements of the game, and the concept of a phenomenal act of generosity echoing throughout generations still makes for a good subplot or main story. Another subquest that works in more mundane settings can be fairly summarized as "Start planting trees today, and you'll have a forest 400 years from now."

With the premise of past events affecting present day, let's move to our side of the fourth wall.

MAKING NOTHINGBURGERS OUT OF WHOOPI

Whoopi Goldberg is no stranger to controversy. As of 2022-03-25, she's garnering attention for something that, to be blunt, shouldn't be controversial. She pointed out that Britain has a history of slavery.  (And anyone who's a fan of the Declaration of Independence should, at the very least, nod once and keep reading.) Below is the video clip from Twitter:

Fig. 2: Prelude to a Hissyfit.

In response to the clip and to Whoopi's comments, the internet gathered together for a nuanced and intellectual discourse about world history, the effects of slavery, and how the existence and implementation of slavery contributed to the continuance and normalization of racism.

...just kidding. The trolls jumped on this like Luigi and that red guy jump on Koopa Troopas. The replies, quote-retweets, and trending root tweets from detractors fell into one of the following categories:

Does that look familiar? Because, to me, it sure as hell looks familiar.

Historians don't know the exact time when slavery began, but there is a consensus on when it became prominent:

Slavery in ancient times typically came about as a result of debt, birth into a slave family, child abandonment, war, or as a punishment for crime.

The article does state that slaves may have been treated better than peasants, but that argument has two flaws:

And then there was slavery in the United States. My American predecessors kidnapped Africans, threw them on boats, and set sail for America. The kidnappers saw African slaves as a cheap alternative to indentured servants. The trip was deadly, with many would-be slaves dying during the voyage. From the first arrival to the end of the American Civil War, slavery was a horror story of abuse, rape, and murder.

It is fair to say that the foundation of American agriculture was built off of slave labor. (I'll get back to that later.)

Now let's revisit the issue of Britain applying slavery to India. To summarize, the East India Company treated India like a source of cheap labor (sound familiar, Confederacy wonks?). British members of the East India Company even coined the phrase "White Man's Burden." (Yes, they groused about "cancel culture" before modern-day right-wingers made it mainstream.)

Once more for emphasis: the enslavement of a group of people dehumanizes them and institutionalizes their mistreatment. And any country who benefitted -- or, sadly, benefits -- from slave labor also has the consequences of institutionalized, systemic racism; it's simpler to justify treating other humans like human cattle when the law supports it.

No one has to like Whoopi Goldberg. No one has to like the way she phrases things. And she is far from infallible. But when she says something that's backed by history, hurt feelings and knee-jerk reactions don't erase the past or its tangible effects on the present.

CONNECT THE DOTS, NOT THE DERPS

Conservative trolls and similar disruptors treat history like a series of unrelated snapshots, stripping away as much context as needed in order to make their fallacy or lie seem plausible.

Similarly, those that claim that "Slavery happened over a hundred years ago, and I don't own slaves, so shut up and move on" want us to believe that every last vestige of slavery evaporated the moment slavery became outlawed. For that to work, one would have to ignore all of the discrimination, hate crimes, dog-whistle code-words, stereotypes, etc. that have direct ties to slavery and to those bitter that their former slaves were now free.

In the example of Britain using Indian slaves, the presence of slavery changed the country's social structure.

In an honest and sane conversation, the assertion that there are no ties between slavery in the past and modern-day racism would be laughed off of the internet.

Instead, the responses are:

And if there is an afterlife, Lee Atwater is doing a victory lap.

(Also, if the mere passage of time is sufficient to ignore history, than 2 billion people have a serious problem. jesus allegedly died and resurrected 2,000 years ago. So if 150 years is adequate to sweep slavery under the rug, then the christians need to trade their bibles for encyclopedias and move on. After all, I didn't crucify jesus, so why should preachers use their pulpits to influence my government? Trolls' rules, not mine.)

Even before my software engineering and quality assurance engineering days, I had an engineer mindset. When I saw a problem, I'd want to solve it. As I gained experience and education, I learned that problems can be handed even when they can't be solved.

I also learned -- often via painful experience -- what doesn't solve a problem.

The cold, hard reality is this: those who don't react to a problem by solving it, mitigating its effects, or notifying those who can handle it are making the problem worse. Even inaction can contribute to a problem when an unexpecting person or party accidentally catalyzes the problem due to lack of notification or warning.

And these trolls going after Whoopi, me, and those who correctly believe that there's still work to be done when it comes to cleaning up the mess that slavery made? They're definitely making the problem worse. Instead of addressing the root causes of systemic racism and rearranging our social and legal structures to minimize or disable racist institutions, we're wasting time explaining to the deliberately ignorant what history and reality are.

And the most maddening aspect is that those who most strongly deny the existence of systemic racism are those who feel practically no negative consequence from it. I've observed it, and I know for a fact that it's real, and even I only have a high-level grasp of it. The difference between a Black person experiencing systemic racism and me blogging about it is the difference between the detonation of an atom bomb and the detonation of a bath bomb.

To be blunt: even though the magnitude of atrocity is significant, there is no moral difference between the slaveowners of the past and the modern-day smokescreen trollers that want to ignore the past.

And if that offends any readers, than that's wonderful.

Because the pain of being offended by history is nothing compared to the pain of those who suffer the modern-day consequences of it.