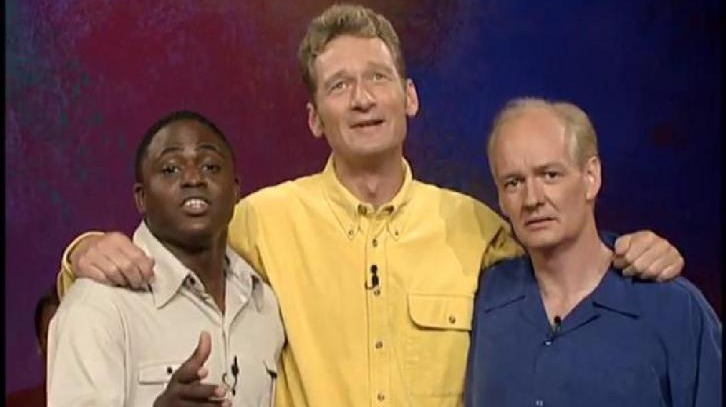 Bad Crossover Ideas: "Whose Crime Is It Anyways?"

I'm a professional writer with Three Gen Media. I can't talk about all of the details of my job due to an understandable Non-Disclosure Agreement. But here's what I can say:

Yesterday, Bree Ann tweeted me a question that didn't have a tweet-sized answer. She asked about my writing inspirations, and I responded with a blog post.

Judging from her reaction, my boss was pleased with my writing submission:

This will be a challenge. The dream in question occurred around the times that Whose Line Is It Anyways? arrived in America and when I started watching Law and Order.

Considering that I sometimes have to sit and concentrate to remember what happened the previous day, trying to recall all of a dream that I had 20 years ago will be flat-out impossible. Fortunately, I remember bits and pieces of it. And perhaps, with the right motivation, I can be convinced to fill in the gaps.

In the Comedy Justice System, the audience is entertained by two unequal and unusual groups: the improvisers who make stuff up, and the host who awards meaningless points to them. These are their skits.

[Two women are walking down a New York street early in the morning. They're talking about... stuff. Then they notice a dead body in the park and scream.

RYAN: What do we have here?

ROOKIE COP: The victim's a White male in his late forties. No belongings except for the knife in his chest.

COLIN: Call it a hunch, but I don't think that the knife is his.

RYAN: Damn it all! If only the dead could talk!

[The VICTIM sits up]

VICTIM: Well, I can talk, but not for long.

[Everyone in the area reacts in shock and fear at the VICTIM.]

VICTIM: What? Doesn't everyone know that denial is the first stage of death?

VICTIM: Barrister. Kyle Barrister. What happened was that I was taking a jog. I stopped to catch my breath and felt a tap on my shoulder. I turn around, and... <gestures to knife in chest>

COLIN: And that's why I don't exercise.

RYAN: What can you tell us about your murderer?

RYAN: That's Charmin-American to you!

VICTIM: ...sorry. I tend to get upset when I get killed. I hope you catch the guy. I don't think I'll be around to see-

[I don't remember what happened next, but I'm pretty sure that COLIN and RYAN spent time canvassing for clues and witnesses. They head back to the police station in response to a call from DREW CAREY. COLIN and RYAN head into his office.]

DREW: <angrily> Where are we with the Barrister case?

THE PUBLIC: How many dimples are in a golf ball, Lieutenant?!?

DREW: And the press is breathing down my neck!

[A herd of reporters starts open-mouth exhaling on DREW's neck.]

COLIN: Well, we have one last lead, Lieutenant. We-

DREW: Then get going!

RYAN: We have one last lead?

RYAN: It could be a coincidence.

COLIN: Coincidence... or not a coincidence?

COLIN: But first... let's use the restroom.

[I don't remember the dialogue that COLIN and RYAN had in the restroom, but I do remember that COLIN didn't wash his hands. This becomes a plot point later. No, really.]

[Eventually, COLIN and RYAN catch and arrest the DEFENDANT. Assistant District Attorney WAYNE BRADY and second chair JOSIE LAWRENCE are trying to get the DEFENDANT, accompanied by defense counsel GREG PROOPS, to confess and allocute.]

WAYNE: We've got you dead to rights. This case is so easy, a 6-year-old could win it!

JOSIE: Mr. Franks, it's in your best interest to confess and spare yourself the trial.

GREG: During your investigation, Colin, did you follow every rule to the letter?

COLIN: Of course! We did it by the book?

GREG: Well, then... did you wash your hands after using the restroom?!?

GREG: Your honor, I move that Colin's testimony be struck from the record.

JUDGE: Which record? If it's one from the Beatles, I'll hold you in contempt.

JUDGE: Overruled! Detective Mochrie's testimony is struck from the record. The jury is advised to throw paper balls at the detective.

[Even more stuff I don't remember. Fast-forward to the point where WAYNE cross-examines the DEFENDANT.]

WAYNE: You were angry with Kyle, weren't you?

DEFENDANT: OF COURSE NOT! I had no ill will towards that slimy, no-good son of a bitch!

WAYNE: Then why did you name your company "I'm Going to Stab Kyle Barrister in the Chest LLC?"

DEFENDANT: ...it was my mother's maiden name.

WAYNE: Do you expect us to believe that, Jeff?

WAYNE: Then if I can't badger the witness, then can I serenade him?

You were pissed as Hell when Kyle took your cash!
He made off with your woman and ate your corned beef hash!
The anger filled your soul with rancor, rage and bile!
So you followed Kyle into the park for over half a mile!
You approached him from behind while he was taking rest!
He turned around, and then you POUNCED! And stabbed him in the chest!

WAYNE: Nothing further. <bows, spins, and moonwalks back to his seat>

[More stuff I don't remember. But I remember the DEFENDANT being declared guilty.]

WAYNE: And so ends the freedom of Jeff Franks, a man who made business personal.

RYAN: A wise man once said that a woman is like a business, Josie.

JOSIE: ...that was you, Ryan. You just said that seconds ago.

COLIN: Well, this has been a long case, and I'm famished. I'm going to try out a new restaurant. Who wants to join me?

<We're going to get sued by: DICK WOLF>

The moral of the story is that not every idea that I have turns into a tweet, a blog post, or an (upcoming) e-book, and this is a good thing.

And for the record, this is not representative of the work that I submit for Three Gen Media.

Just to be on the safe side, I'm going to review today's submissions and remove all instances of *donkdonk*.

Law and Order Whose Line Is It Anyways Crossovers Crackposting