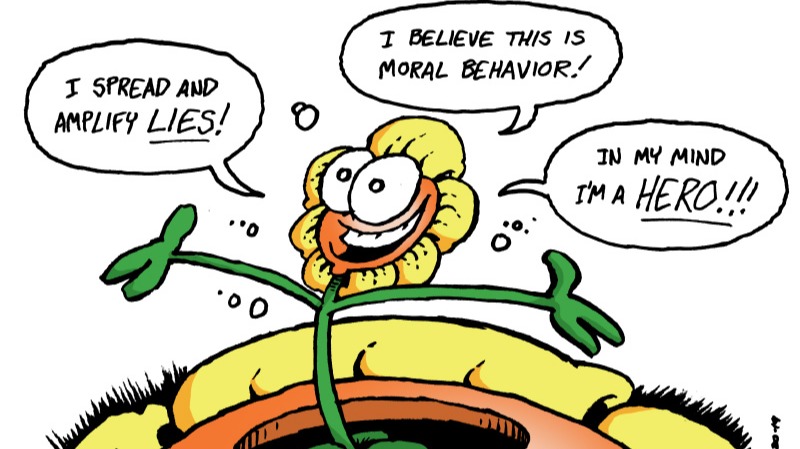 A Connectivity of Dunces

DISCLAIMER: I use the short.est link shortener to both manage hyperlinks and to gain minute amounts of income when readers follow the links. Also, I use referral links when possible which often reward both me and the reader when the reader performs certain actions such as subscriptions and purchases. I will gladly provide clean links upon request.

The internet is a wondrous and effective tool. While wearing pajamas in my bedroom in Kingman, I can monitor my government benefits, purchase and manage ETFs, watch movies or television on-demand, turn Skyrim into the weirdest nation in fictional history, look for employment, or plan a date-cation with Soggy.

...oh, yeah. And I can find out more about this newfangled cryptocurrency hootenanny that you youngsters keep jiving about.

One of the unintended consequences, however, is that the internet has propagated, celebrated, and weaponized stupidity. Considering current events, I don't think that's a great trade-off.

THE VILLAGE IDIOT MEETS THE MOST POWERFUL MEGAPHONE IN HUMAN HISTORY

Many stories staged in the past -- both fictional and non-fiction -- include a village idiot. Often, the village idiot is comic relief or a similar distraction, spouting gibberish or nonsense that has little to no impact on the main theme(s). Occasionally, the village idiot speaks a Cassandra Truth. Generally, though, the village idiot's ramblings range from inconsequential to detrimental.

The village idiot is art-imitates life, as propagating flat-out wrong information is literally older than the bible. It's bad enough when a village outlier shouts a dangerously-wrong statement. It's worse when said idiot manages to convince a small village or town that his nonsense is true. Now imagine that some over-important village idiot could somehow manage to convince people on the other side of the world that killing people during a solar eclipse was a good idea.

And those new converts reach out to other tribes in other parts of the world.

That was not possible thousands of years ago or even 3-8 centuries ago, depending on your views of the effectiveness of past forms of communication.

Fast forward to 2021, where literally anyone with a signal and a device can post literally anything. Yes, Terms of Service exist, as do moderators who enforce them. But one cannot un-ring a bell; once a terrible idea or a flat-out lie reaches a like-minded audience, deleting a comment, post, or video is too little, too late.

When used properly, the internet can be a priceless asset for those who seek genuine knowledge or wish to fact-check themselves before going public with their digitized thoughts. Many organizations synonymous with reliable knowledge have notable internet presence: Britannica and Merriam-Webster are two of my preferred go-tos. And any well-coded and well-tested web search engine can help users pinpoint the exact data they need.

The problem is that, when it comes to "information" on the internet, Theodore Sturgeon was an optimist. Literally anyone with a stable internet connection can share literally anything. Yes, accounts and IP addresses can be blocked, and internet media can be deleted after it has been posted. However, the internet has far more gadflies than guardians, so anyone from anonymous social media bots to Fox News can declare virtually anything and expect it to be treated as factual by a sympathetic audience.

Case in point: the coronavirus, a.k.a. the illness where people who can't correctly spell "an" think that they know more about a deadly disease than an overwhelming majority of trained, certified, and experienced doctors.

Coronavirus "discourse" on the internet is one of many examples of idiocy run rampant on the internet. To find more examples, one need not go back further than a handful of months. There are lies about the 2020 election, lies about [insert literally anything here] being socialism/communism/marxism/Naziism/[insert literally any noun here]ism, and false accusations so common that "pedo" often replaces "Hello" as a common greeting on online forums.

Too many people think that they know more than certifiable experts with substantial data.

Too many people think that their opinion drumpfs... excuse me... trumps others' facts.

Too many people think that they're qualified to issue a psychological assessment based on a reply that disagrees with them.

Too many people think that employing any of these "tactics" is an acceptable substitute to actual discourse.

And too many people look at others littering the internet with their digital flatulence and say to themselves, "Now there's someone that I can trust."

WHY NOT TREAT FALSEHOOLDS AS FELONIES?

The United States of America has laws and legal punishments for the act of perjury. The TL;DR version is that perjury is the act of deliberately lying during a legal proceeding after taking the oath. Yes, there are minor loopholes and exceptions (such as the act of perjury needing to be related to the legal issue at hand). However, a liar who tells a bald-faced lie to a judge or a jury risks imprisonment, probation, and fines.

Similarly, lying to law officials investigating a criminal matter is obstruction of justice and is considered either a misdemeanor or a felony based on the severity and the location of the lies.

The US has laws against libel and slander, but those are civil matters instead of criminal matters. And judging from the proliferation of false accusations of pedophilia, I have serious doubts that any laws pertaining to libel or slander are even enforced any more. But that's another blog post for another time.

We as a society have decided that some lies are so disruptive or so heinous that they qualify as criminal acts.

At the risk of sounding like I'm attacking the Constitution or human rights in general, I believe that the same "lies can be crimes" mentality should be extended to large swaths of the internet.

Yes, this sounds extreme. But since groups are literally weaponizing online lies (yes, "ABORTION R MOORDOOR" is a lie, and anyone who says otherwise is... you guessed it... a damned liar), I'd argue that it's more of a case of closing the barn doors after all of the livestock have escaped. Significant numbers of groups and individuals are lying on the internet to obstruct, terrorize, and kill their targets. Criminal speech is criminal speech whether it happens in a courtroom, a place of business, or a web page, so it's long past time for a much-needed internet cleanse.

I admit that I did not run this article by my lawyer friend (I'm not racist against lawyers because I have a lawyer friend) before I published, but here are some changes that I would propose:

Again, I admit that these proposals may sound extreme, and they would need some fine-tuning and tweaking to be considered legal and valid.

However, being falsely accused of a crime or reading the lie for the 1,000th time that transgender people want to build their summer homes in scenic downtown womens' public restroom would be more tolerable if the shit-spewing reprobate behind the lie was forced to pay you a five-figure sum for his cyber crap-slinging.

I know full well that lies predate the internet. I'm familiar with phrases such as "old wives' tales," "tall tales," and "The book of mormon." Lies were damaging enough when people were limited to oral communications, foot-delivered parchments, and similar methods of delivery that are slow or ineffective. However, the technology that enables the dissemination of lies far outpaces the technology and manpower to stop and/or punish those lies.

It's a pity that "Thou shalt not bear false witness" isn't a theme in popular culture.

And I'll admit that some trolls on the internet genuinely believe the nonsense that they post. But a well-intentioned criminal and a deliberate criminal are both criminals; the only differences are the motives and the co-conspirators.

To find uncensored lies, one does not need to even leave this site. Two minutes of archive-diving should be sufficient to find lies about politics, medical issues... and oh, yeah, that cryptocurrency thing that you youngsters gab about in your soda fountain shops.

To Publish0x's credit, they offer functionality that allows readers to report low-quality articles for a variety of reasons. And the staff has a great response rate (1 business day on average as compared to Binance US's 2 months). However, having to delete wrong information still means that readers have ample opportunity to engage with -- and propagate -- the lies before the admins delete what was the original copy.

It's long past time that the world treats deliberate cyber-lies as the threat and the crime that it is. Yes, I know that some laws already exist, but that's a baby step in the right direction, not the goal zone at the end of the field.

And that's no lie.