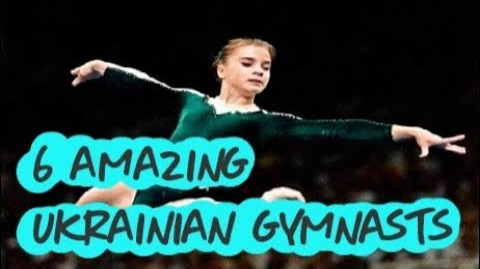 My support to the people from the country that has produced some of the best gymnasts the world has ever seen.

1991 was the last year when the Soviet Union competed in gymnastics international competitions as the USSR; a year later in 1992, they competed for their own republics at the European Championships.

At the world championships held in April 1992 and at the 1992 Olympic Games, they competed as the Unified Team, but they were not the same anymore. While all the gymnasts in the Unified Team that competed at the Barcelona 1992 Olympic Games were from former Soviet Union Republics, only 12 of the 15 former Soviet Republics were competing under the Unified Team Umbrella, and Latvia, Lithuania, and Estonia competed separately. The team that competed in Barcelona 1992's main star, Svetlana Boguinskaya, was from Belarus, there were 2 gymnasts from Ukraine (Tatiana Gutsu and Tatiana Lysenko), two from Uzbekistan (Oksana Chusovitina and Roza Galieva) and one from Russia (Elena Grudneva).

Though Boguinskaya was the most well-known gymnast in the team, when it came to skills and difficulty, the team coaches knew that their best bet for a gold medal in the individual competition were the two Ukrainians, mostly Tatiana Gutsu, but also Tatiana Lysenko. Fans of gymnastics know too well what happened at the team final, that led to the events in the individual all around final, and that would be the subject for another article. The outcome was that Tatiana Gutsu won the gold individual medal, hence becoming the 1st ever gymnast from the Ukraine to win the Olympic title, and also the 1st gymnast from a former Soviet Republic to win Olympic Gold after the Soviet Union break-up.

The year that followed the 1992 Olympics was one of the most exciting that I remember in gymnastics. We need to remember that there were not as many international competitions back then, and only the big events, such as worlds or Olympics were broadcasted on TV.

When the 1993 world championships opened up, where we had only seen the best 6 Soviet gymnasts, who were the best in the world, compete in the team event, now we had up to 2 from each republic at the all around final, and many gymnasts who would not have had a chance to compete internationally before now had their chance. It was such a gymnastics feast, instead of having just 3 gymnasts from the Soviet Union at the all-around final, now we had 3 from Russia, 3 from Ukraine, some from Belarus, from Uzbekistan, from Latvia,... amounting to 9 former Soviet gymnasts out of the total 24 gymnasts who competed at the all around that year. Also, there was such camaraderie between those gymnasts who, only 1 or 2 years earlier were competing together for the same country.

By the next Olympics, in 1996, the Ukrainian team had some of the strongest gymnasts in the competition, and though they didn't leave up to their expectations as a team, the all around champion was again from Ukraine, just like 4 years earlier, her name was Lilia Podkopayeva and she became one of the most beloved gymnasts in the history of the sport, who inspired so many other champions, from all over the world. With her balletic floor routine, Lilia also won the gold medal in the games held in Atlanta.

Fast forward 4 years to Sydney 2000, and, though Ukraine was less prominent than it had been, Viktoria Karpenko had a fair chance at winning the gold medal at those games had it not been for one of the most bizarre stumbles seen on floor. Those games will also be remembered for the vault fiasco, but that is another story.