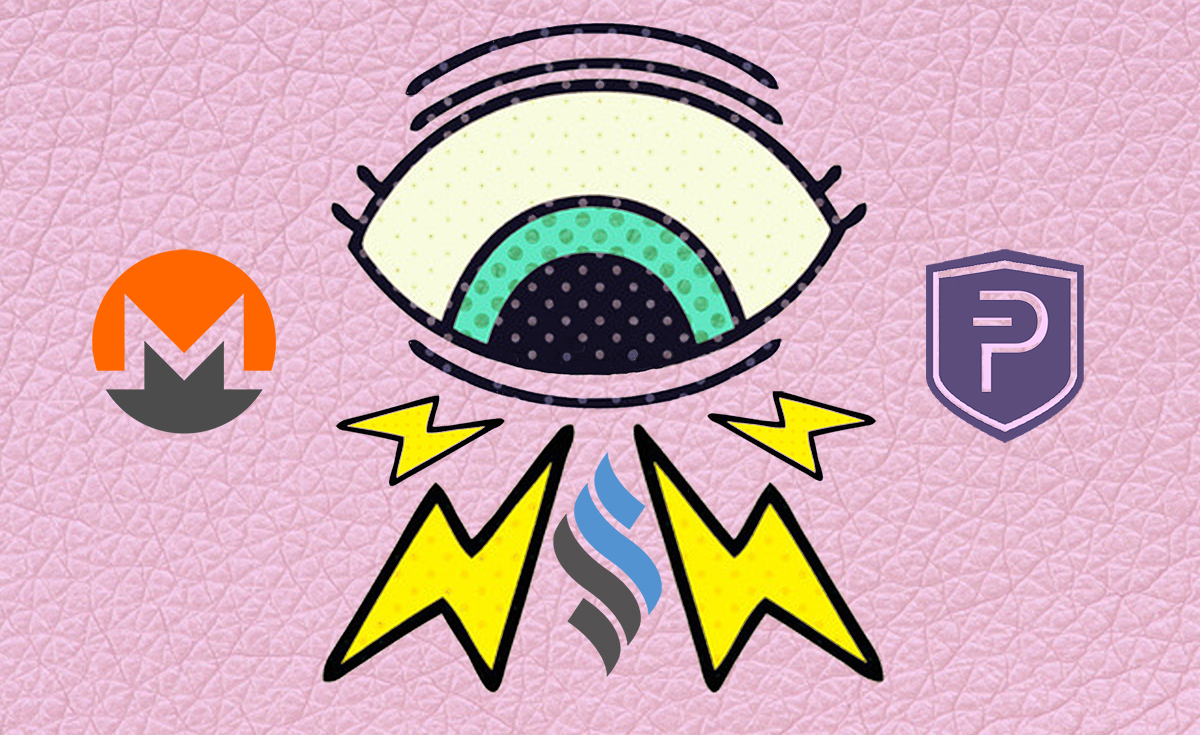 Peacocking in the Age of Privacy: Why I've Chosen Spectrecoin

Privacy is a hot commodity in the crypto world but it doesn’t take long to realize with a little digging that not all privacy coins are created equal. Many coins fail to offer total anonymity for their users but instead offer a dizzying snake oil brew of fancy sounding features that in the end still leave you vulnerable to attacks, hacks and other tomfoolery *Cough…cough…Verge…* Those most susceptible to the privacy coin hustle are those investors with a limited tech understanding who swept up in the hype, marketing, or drive to make a buck fail to fully realize what the crypto they’re buying into truly offers. Today I'll attempt to speak to those investors and illustrate in the most simplistic way what drew me to my favorite privacy coin of the moment Spectrecoin/ Xspec. I'll describe some of the privacy features Spectrecoin uses as opposed to other crytpocurrencys discussing both their strengths and weaknesses then I'll lay out the factors that shaped my judgment in ultimately choosing Spectrecoin. Before going deeper it's important to note that no single privacy tech feature I’m about to mention in and of itself offers total anonymity.

Don't be fooled by black magic marketing, it’s how a cryptos features work together in concert with each other that enable its full range of privacy and security.

That being said, let’s get on with it. Here are my truthful, yet subjective (I'm always open for debate) reasons for why I chose Spectrecoin.

Spectrecoin uses a POS (Proof of Stake), dual coin system, that utilizes ring signatures, and dual key stealth addresses to hide both sender and receiver information. It runs native through Tor to protect your IP info and OBSF4 obfuscation to break through the firewalls of censoring countries. Running native through Tor is an important distinction because although some coins do offer Tor, the difference is that Spectrecoin registers all it's nodes as Tor hidden services, and connects to Tor hidden services only, meaning the whole network is exclusively run via the Tor network without using exit nodes. Proxies or nodes outside the Tor network can potentially be hacked or infiltrated to track your information, significantly cutting down on your security.

This nuance between running Tor native and offering Tor through a non-native proxy or plugin is one of those examples where the devil is in the details.

Being a dual coin system a person using Spectrecoin can choose to become totally anonymous and opt in with “Spectre” or opt out with “Xspec” depending on their privacy needs. This dual coin approach to privacy can be viewed as a good or bad thing depending on your point of view. I think it's good in the sense that it allows the coin more flexibility in the shifting world of crypto legality and regulation. It may also benefit businesses or individuals who require keeping records of their transactions, as they can be made public through Xspec. Conversely, though a dual coin system can be perceived as bad in the way that it may confuse new comers who unaware of the dual system unknowingly leave their identities and transactions public. Again, it’s always important to do your research before assuming your privacy isn’t at risk. Remember: we still live in a world where many consider Bitcoin private. To fight this naivete Spectrecoin incentivizes users to stake “Spectre” over “Xspec” by offering higher staking yields for Spectre balances.

In the past with Spectrecoin it was only possible to Stake your balance using Xspec which was public, but now with the newly launched PoAS "Proof-of-Anonymous Stake” algorithm it is possible to stake your private Spectre balance as well. This is a point of innovation as Spectecoin is the first "Trustless Setup" coin to offer POS anonymous staking, and currently the only coin to offer POS anonymous staking.

Perhaps the most popular coin that offers similar Tech to Spectrecoin is Monero. Monero is a POW (Proof of Work), CryptoNote coin that like Spectrecoin offers ring signatures, and stealth addresses protecting both sender and receiver. Monero includes the addition of Ring CT a feature which Spectrecoin does not have (Ring CT prevents transaction amounts from being visible.) but Monero lacks Tor security so in a traditional setup your IP information would still be vulnerable. Monero does not rely on a dual coin system and is instead privacy by default, which means there is no opting out of its privacy features. Another slight element of distinction is that although Spectrecoin offers ring signatures like Monero it is technically not a CryptoNote coin. Spectrecoin is unique in that it is built upon a Bitcoin Core code base and uses ring signatures.

A couple big factors that led me to choose Spectrecoin over Monero was the fact that it lacked native Tor, and that it is a POW coin. I’m personally a proponent of POS over POW mining because POW requires too much cost, resources, and energy consumption to maintain. There is a lot of debate surrounding the sustainability of POW in the long term so for me POS is the smarter more progressive choice. The cost differential can be quite substantial especially when you compare staking on a low cost Raspberry Pi vs buying expensive mining equipment. When I compare the cost of mining vs staking and the potential for ROI considering how relatively unkown Spectrecoin is at the moment, Spectrecoin is an easy choice for me. Don't get me wrong though, I also believe in the tech, future, and great community of Monero.

The crypto privacy world is large enough to house  multiple approaches and solutions, so peace to you my privacy brothers and sisters we're all on this journy together.

Spectrecoin and Monero are each coins that offer ring signatures but this is not the only privacy game in town and there are other protocols that offer decent comprehensive privacy as well. These other privacy coin contenders use what’s called Zerocoin protocol, and this differs considerably from the tech of CryptoNote. Without going into great technical detail, the potential upside in theory for using Zerocoin protocol as opposed to ring signatures would be that your pool of anonymity would be greater, so the potential of getting your information revealed would be considerably less. However, this increased pool of anonymity comes at a cost and this opens up yet another debate, “Trusted” vs “Trustless” setup. Monero and Spectrecoins ring signatures use a Trustless setup while Zerocoin coins use a Trusted setup. Trusted systems require a permissioned private key for setup, and if this key is exposed, the privacy of the entire network is at risk. If a hacked node or bad actor enters the realm of Trusted setup the whole protocol is at risk, which is not the case with Trustless setup since protocol security exist outside of a private source. (Some examples of good Zerocoin coins are Zcash, and PIVX.)

Although the privacy is pretty complete within a Zerocoin protocol, the idea of operating within a Trusted Setup is a deal breaker. Having to trust that bad actors will not take advantage of this setup is a little too much for me; perhaps I’m being too conspiratorially minded, but I can think of just too many ways in which this setup goes wrong. To play devil’s advocate, though, it’s entirely possible to deduce transactions within a Trustless ring signature or CryptoNote protocol if the anonymity pool is too small. So when looking at “Trusted” vs “Trustless” setup you really have to weigh the pros and cons of each and decide for yourself which you believe will be most secure in the end.

Recently my fears were confirmed with Trusted Setup and a vulnerability was found in the Zerocoin protocol which allowed attackers to mint coins out of thin air. The discovery of this vulnerability leaves Zcoin, PIVX and other Zerocoin privacy cryptos out of commission while they scramble to find a solution to the Trusted Setup dilemma. Until a reliable and tested fix is found personally I'd stay away.

So we’ve discussed the tech but what kind of ROI potential does Spectrecoin have compared to other top privacy coins. Well being a small cap relatively unknown privacy coin at the moment I believe Spectrecoins potential for a ROI is far greater then its technically comparable but better-known counterparts. This is a plus for me as an investor because I believe there is massive potential upside here. Currently Spectrecoin is ranked 330 (at time of writing) on CoinMarketCap yet it ranks within the top 100 coins based on developer commits according to CryptoMiso. The small but dedicated team behind Spectrecoin is making strides and word is slowly getting out about this coin. I think it’s safe to expect a boom in hype and community to occur very soon. Another interesting development that is promising for Spectrecoin's growth potential is that the Founder and developers have recently decided to go public with their identities, and a non-for profit organization newly established around the coin. Both these things in my opinion greatly build trust and increase accountability. “The Spectrecoin Foundation” now works to ensure the coins future and development toward privacy. With the new “Spectrecoin Foundation” formed and the team now transparent, not only will this help awareness of Spectrecoin grow, but it will also allow the coin to meet increased demands when applying to larger exchanges. I wouldn’t be surprised if we see Spectrecoin hitting some bigger named exchanges in the near future.

Currently one of Spectrecoins main problems is that it can suffer from low volume due to the limited number of exchanges it’s available on. I suspect however this will not be a long lasting problem.

Remember the two best attributes an investor can have are foresight and luck, so lets briefly consider some of the recent developments to come to Spectrecoin in 2019.

With all these recent developments Spectrecoin has never looked more bullish, but do your own research and don’t believe the hype, even if you hear it from me.