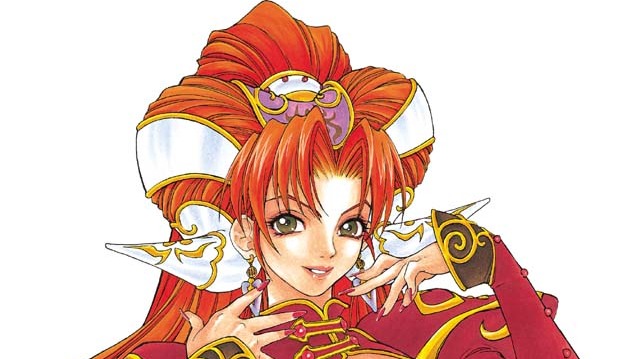 I'm currently replaying Grandia 2, a JRPG first released in 2000. Two ways that it stood out for its time were through its battle system -- which combined elements of turn-based and real-time combat, such as cancelling enemies' moves and managing different moves'/spells' charge times -- and its storyline.

On the surface, the storyline is fairly basic. 1,000 years prior to the start of the game, Granas -- the God of Light -- fought Valmar -- the God of Darkness -- in the brilliantly-named "Battle of Good Versus Evil." Granas chopped up Valmar and then fell asleep. Fast forward to the beginning of the game, where Valmar is reawakening, which is bad news for anyone who doesn't want their planet covered in purple glop, razor flies, and roid-raging cockroach mutants.

Considering that I just praised the storyline, it's a spoiler alert that things are not as simple as they first seem.

And nowhere is that more apparent than by looking at the religious affiliations of the six playable characters:

Another spoiler: these six characters work together to save the world. And it is not the typical "Let's put aside our differences to beat up a bigger threat" crossover. Throughout the course of the game, the six playable characters learn more about each other, the world they inhabit, and its true history. Mareg is the most emotionally developed and spiritually balanced of the sextet; he believes in neither Granas nor Valmar, but he's happy to learn and help as long as he can share meals with friends and cut bad guys in two. Other characters have far steeper character development slopes. When Tio joins the party, she literally doesn't understand the concept of "freedom." (Fortunately, she's more useful and tolerable than debate bros and gun nuts.) And Elena's "Darkness == BAD!" stomps on quite a few toes, and it's a major problem since Millenia -- who is, once more for emphasis, literally a piece of Valmar -- is using Elena's body as a timeshare.

The game effectively deconstructs and subverts many "good versus evil" tropes in ways that hold up even 22 years after its release. Millenia, Roan, and Tio have no problem pulling off heroic feats despite their dark ancestry, and... one more spoiler alert... it turns out that the mere presence of darkness is not a problem itself as long as those who carry it don't succumb to it. (Millenia, Elena, and Ryudo can vouch for me on this.)

Here's how this all ties into Tweet, You Sinners.

My Following lists on both of my Twitter feeds is a virtual potpourri (especially my NSFW feed, which adds sex talent, entertainers that "work blue," and a larger concentration of LGBT-friendly users). There is not one person on either Following list with whom I agree 100%. That I willingly follow unapologetic christians like Bishop Swan and John Fugelsang is both deliberate and understandably confusing to long-time readers. What I've grown used to expecting from mutuals and followees are mostly-substantial discussions about issues where a consensus is impossible or ill-advised. Yes, Google and Britannica are great, but getting valuable insights and information directly from subject matter experts is, at worst, as effective as a self-guided internet search.

Contrast to the theist trolls that engage in "The bible is true because the bible says so" and any of hundreds of nonsensical insults about atheists. If any of the heroes of Grandia 2 were similarly closed-minded, Valmar would have won.

I can understand how some may think of me as a hypocrite. My pre-action to that would be to point out that most of my Tweet, You Sinners! activity have been direct responses to vacuous talking points and deranged insults from people with no desire for open discussion (and no, sealioning does not count). My actions may not help, true, but me trying to inform the willfully ignorant would be like me trying to place a new set of tires on a rusted car with no engine.

And speaking of vacuous talking points and deranged insults from people with no desire for open discussion, here are today's twenty terrible takes from theist trolls.

Fig. 1: PvN Never Met a Strawman He Didn't Like.

Fig. 3: I Don't Understand How Equating Atheism with Socialism Is Supposed to Convert So Many Foolish Atheists.

Fig. 4: Pity That jesus Never Said Anything about Turning the Other Cheek.

Fig. 5: I Haven't Seen Many Modern-Day Atheists That Condone Slavery.

Fig. 6: The Debate Won't Happen on the Seventh Day. That's the Day of Rest, After All.

Fig. 8: yahweh Must Have Done the Mommy/Daddy Dance Multiple Times with Mary.

Fig. 9: After Followers Spent Centuries Eating the Body of christ, It's Theoretically Possible That Some Followers Have Eaten Holy Trinity Tube Steak.

Fig. 10: I Can Prove That I Exist. By Walter's "Logic," I Can Perform More Feats Than god.

Fig. 11: Sometimes, All That I Can Do Is to Shake My Head and Move on.

Fig. 13: jesus Chillaxing in Hell Would Explain Why No One Has Seen him Since the "Resurrection."

Fig. 14: Why Can't yahweh Be a Real christian Like Dinesh D'Souza?

Fig. 15: The Gap between a Troll's Assertion and a Troll's Conclusion is a Gap That No Deity Could Dream of Filling.

Fig. 16: Oscar the Grouch and yahweh -- Two Rotten Peas in a Garbage Pod.

Fig. 17: Okay, Mr. Troll. Show Us Where on This Picture of mohammed Where the Bad Atheists Touched You.

Fig. 18: Projection So Large, It's Visible on the Un-Split Moon.

Fig. 19: Who Needs Reality When You Have allah?

Fig. 20: Don Quixote Tilted at Windmills Just Like Abderpah. It Didn't Work for Him, Either.

And that brings us to 2021-12-06... or as Abderpah would say it, "Atheists claim that December 6 doesn't exist and then shave a thousand yaks when a muslim tells them that the moon is filled with earwax and unicorn farts."

Yes, I overdid that last one. But at least when I do it, it's for intentional comedy, a sharp contrast from Abderpah.

Speaking of annoying things: yes, the Friendzone does not exist, but if it did, then today's job interview would have ended with the company friendzoning me out of a part-time job. It's never a good sign when the hiring manager says that they have other candidates to interview.

Any readers who know of companies seeking a certified software tester or a professional writer can send my professional profile to interested parties. I've heard nearly four years of "No's," but all it takes is one "Yes" to start turning things around. Every lead is appreciated.

Or as Abderpah would say, "Atheists don't think that jobs exist because their bellies are full of fiddeldy-foo which muslims beat like oingo boingo drums."