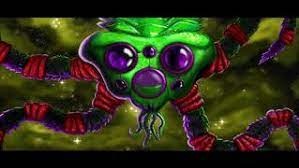 I was going to start this blog post with a brief summary of why I haven't published a blog post in a few weeks.

Instead, I'll demonstrate the potential dangers of trying to scam me.

I've recently refocused on my job hunt, searching for both full-time work as a software tester and either full-time or contract work as as writer. My frequently visited sites include Virtual Vocations and Craigslist.

One such scam (not linked because the ad has been removed) stated that it was looking to hire a proofreader. I responded with my Google Voice number: 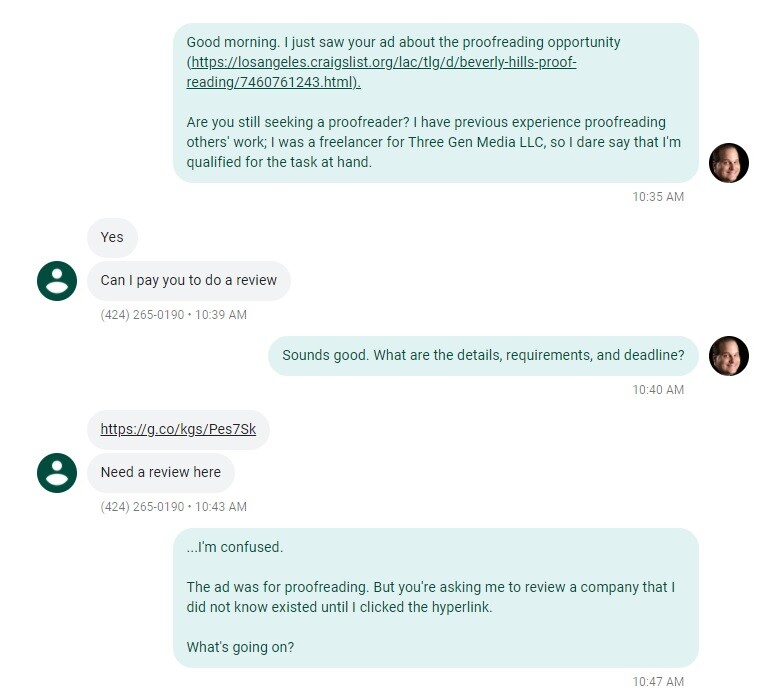 I deliberately did not mask the phone number because -- if it is not yet completely obvious -- this was a scam. (Also, I'd bet the farm that the number is a burner number similar to my Google Voice number.)

But here's the thing: I have a wild imagination, and no fucks to give. So I decided to give this bonehead some pro-bono work. 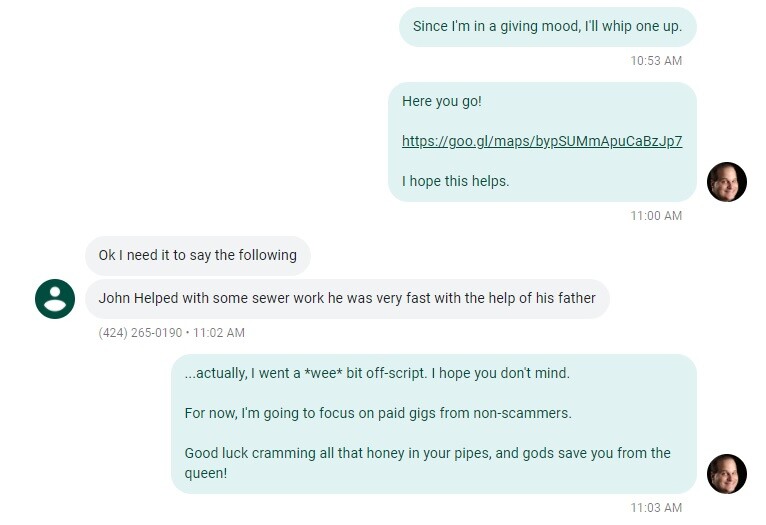 Fig. 2: Disservice with a Smile.

My slightly-off-script review is still up as of 2022-03-21 14:42 MST. However, I've had a few friends tell me that they can't access the link. Also, there's a slight chance it -- along with my Google account -- might be removed. In case of either instance, here is the review that I submitted:

I called their main line, which was answered by bees. They said that they could help me as long as I paid in honey up front and did not bring any wasps with me.

I was greeted by the receptionist, who was a bee. He told me that my problem was that there was not enough honey in my pipes, so he escalated my case to the manger, whom he called the Queen Bee.

The manager, who is also a bee, ordered me to mate with her and then die.

Would not recommend on account of dying, even if the mating was good.

And if this sounds silly to you, that's because a Craigslist scammer using the number 424-265-0190 posted an ad about a proofreading opportunity and then instead requested that I review a company that I did not know existed until this scam.

I have a feeling that I won't get paid for this review, and not because of dying after mating with a queen bee.

And now, Diamond Plumbing and Water Heater Repair has a serious leak problem, and the root cause is the bullshit that one of their associated tried to pull upon me.

Fig. 5: Greek Mythology Isn't as Steamy as Sexy Kali, But It's Close.

Fig. 6: When It Looks Like a Troll is Playing Dumb, They're Not Playing.

Fig. 7: Disproving the bible to Pwn the Atheists.

Fig. 8: The "Immoral Full Western Education System" Could Have Prevented Mohammad from Posting Such an Error-Laden Tweet.

Fig. 9: An Argument So Weak, My Cousin Vinny Could Tear It to Shreds.

Fig. 10: If yahweh Were Real and on the Anti-Choicers' Side, Anti-Choicers Wouldn't Have to Bear False Witness So Frequently.

Fig. 11: If You Want to Make Your Religious Beliefs into Law, I Want You to Pay All of Your Taxes. "Megachurch" My Ass.

Fig. 13: To Be Fair, Steve Quayle Is Already an Ideological Zombie.

Fig. 19: If I Ever Stop Making Game Grumps Jokes, That Might Qualify as a Miracle.

Fig. 21: Does This Make Jason Vorhees an Angel or a Prophet?

Once more for emphasis: I'm actively seeking jobs -- preferably remote/work-from-home -- as either a software tester or a professional writer/proofreader.

I'm fortunate enough that I'm not lacking for essentials like food and shelter. However, I'd like to resume working and to do better than "just getting by." Since my situation isn't dire, I'm not going to ask for handouts. Besides, I can understand how annoying it can be when "My life sucks; send me bucks" posts dominate a social media feed or emailbox. (I have no problem with people selling their goods and services, but when people send me unsolicited "gimme" DMs, my blood pressure rises. When I'm especially cranky, I reply with some variation of, "I have -$65. How much do you want?")

I have fifteen years of experience as a certified software tester (CTAL-TAE, CTAL-TTA, CTAL-TA), and I was a writer and proofreader for Three Gen Media for almost a year. And I can start a new job almost immediately.

For obvious reasons, I won't be praying for job hunt assistance. Though I will probably groan, "Goddamnit," after every few dead-ends.

I'm not infallible, after all.