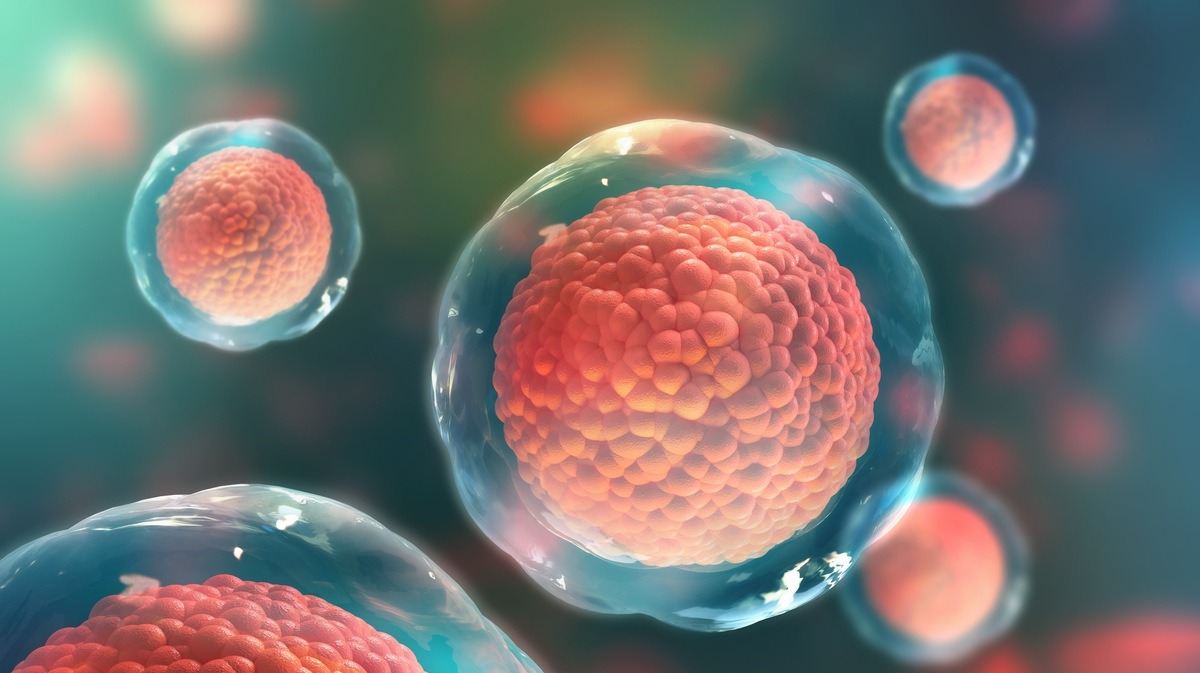 introduction to the world of stem cells

preface
Since the beginning of time, scientists have dreamed of creating immortality. Is this picture with the emergence of stem cells perhaps getting closer than ever? Imagine a cell that can become any other cell with the push of a button. Any old cell in your body can be replaced simply by administering new cells. A broken bone can be repaired in days simply by applying some stem cell glue to the fracture. People with spinal damage that prevent them from walking. Would it be possible by injecting stem cells that heal such a wound and those people can move around freely again? Or damage to, for example, the atlas or your skull can be repaired. This report explains whether and how you can promote bone regeneration through stem cell technology. But what is a stem cell? A stem cell or cellula called precursors is a cell capable of changing (differentiating) into another cell type. Unlike animals, plants can continuously form new organs, such as leaves, flowers and stems, from remaining stem cells, thanks to the meristem. Humans only have this to a limited extent, but with the emergence of new techniques to make stem cells and transform them into other body cells, a new world is opening up to medicine. More information on stem cells will be provided later in this report. There are also more and more ways to obtain stem cells on how and what is discussed. What can you do with these stem cells specifically aimed at your bones? There is also some contradiction with these new developments. But also certainly a possible application for the future, such as 3D printing of bones, bone cells or organs. The question also arose whether you can take medicine now or in the future to activate the body's own response from stem cells? Furthermore, this report is intended to provide an informative picture of the application or future use of stem cells in medicine aimed at bone regeneration. In short, the information in this report may be a small stepping stone for those interested in some basic principles of bone regeneration using stem cells.

What are stem cells and how can you obtain them?

The body of an adult human consists of several billions of cells. A cell can be seen as a building block in your body that has a certain function. These building blocks work together in harmony. In total there are about 220 different cell types. The most important cell is the egg. All other cells arise from a fertilized egg. The difference between a fertilized egg and a skin cell, for example, is that a fertilized egg can still grow into all kinds of different cells. You can call such a cell a stem cell and it can be used in the treatment of all kinds of diseases because it can turn into a cell that is needed for that.

There are three forms of the cell: the totipotent, pluripotent and multipotent stem cell.
First the totipotent stem cell. When a sperm merges with an egg, a zygote is created. A zygote is an example of a totipotent stem cell; this cell is able to grow under the right conditions into a complete organism (all more than 220 different cells) including the extra-embryonic tissue such as the placenta.
Totipotency is very difficult to demonstrate in human stem cells. This is easier in mouse cells: one injects a blastocyst (A blastocyst or blastula is a hollow ball, typical of the embryonic development of vertebrates in particular, which arises during the division of a fertilized egg (zygote)). with the suspected totipotent stem cells that have a visible or easily detectable abnormality, such as albinism. When the blastocyte develops, a complete individual can form, one can easily find out whether the totipotent stem cells have grown into all kinds of tissue. Such a mouse is called a chimeric mouse; it goes without saying that the existence of a thymic person raises ethical questions. But that's for another or follow-up report to investigate that. (ver Meer, 2014)

(totipotent cell in the development line of the cell)

Via embryos
embryonic stem cells can be obtained from the inner cell mass of human embryos in the blastocyte stage.

Via fetus
Primordial germ cells (precursors of the germ cells) can be removed from fetal tissue of terminated pregnancies. These EGs or embryonic germ cells can also differentiate into cells from one of the three germ layers.
Through therapeutic cloning
A third source of isolating pluripotent cells is the use of somatic nuclear transfer. A somatic cell nucleus of the patient is placed in an egg. This cell could then be differentiated and implanted.

iPSC (induced pluripotent stem cells)
Messrs. Takahashi and Yamanaka succeeded in 2006 in programming differentiated cells back to stem cells. These cells are called induced pluripotent stem cells (IPSC). The advantage of these "stem cells" is that they are easy to obtain, but recently (2012) it has been discovered that iPSC is not as undifferentiated as embryonic stem cells. If the epigenetic code of the iPSCs could be changed, the possibilities of iPSCs could be as great as those of embryonic stem cells. (Lalieu, 2014) (hematopoietic stem cell and what they can become.)

The focus on AS increased in particular with the emergence of ethical implications about the use of ES and EG (Boogaerts, 2005). Today, it is believed that the amount of AS is present in every organ of an adult (Allemeersch, 2002). However, the origins of AS are not yet out of date, but scientists suspect the existence of a universal stem cell that would be present in the bloodstream. The fact that AS are nestled in an organ close to a blood vessel reinforces this presumption. AS are also very different from each other, for example, hematopoietic stem cells are very active, while in most organs adult stem cells are mainly present at rest. In order to use the patient's own stem cells for treatment, they must first be isolated and generated in larger numbers. For acute diseases, however, the time is not available to cultivate enough cells and diseases caused by a genetic defect may not be possible because the genetic error can also be present in the stem cell.

Tissue banks will provide a solution for these patients in the future. tissue banks are banks in which quantities of differentiated tissue are stored. With different HLA types, to enable transplantation in as many patients as possible without rejection. These tissue quantities can possibly come from (embryonic) stem cell lines. This bank may contain, for example, bone tissue, liver cells, lung cells or heart cells with a specific genetic code that fits an HLA typing of your choice. For example, a transplant may take place of cells specifically designed for a specific person, so that the body cannot perceive any difference or defect and the cell will not subsequently be rejected. In this way, people with Paget's disease, which accelerates bone abrasion, can get bone tissue transplanted and those people will experience less wear and tear. I do hope you enjoyed this informative piece on Stem cells. in upcoming articles, we will discuss more this topic. we will be taken a look into how stem cells can be cloned, how they might help against bone regeneration and we will discuss some thought experiments for other potential uses of stem cells. For now, thanks for reading and I will see your views next time.