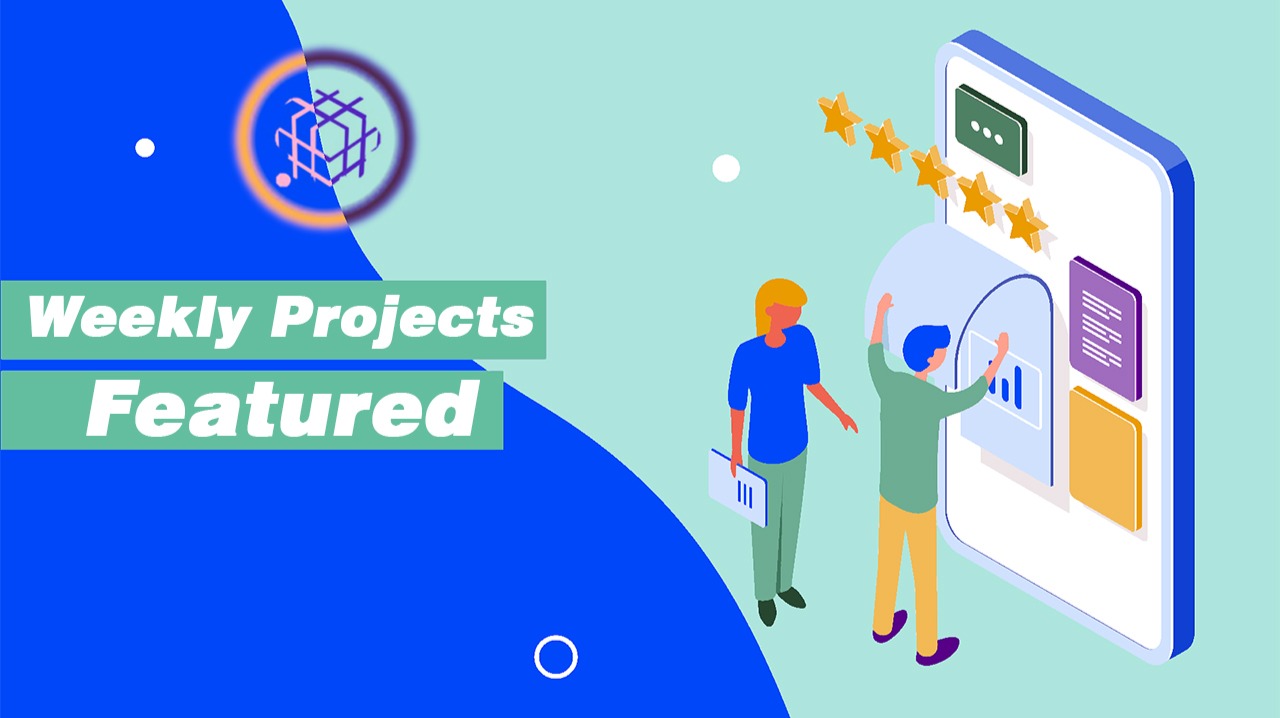 During the week of August 29 to September 6, and according to the last criptonoticias report, the cryptocurrency market turned red.

Most DeFi tokens fall faster than the market in a week, losing 20–50%. SUSHI, despite recent events, is at the same level as 7 days ago and according to icodrops. 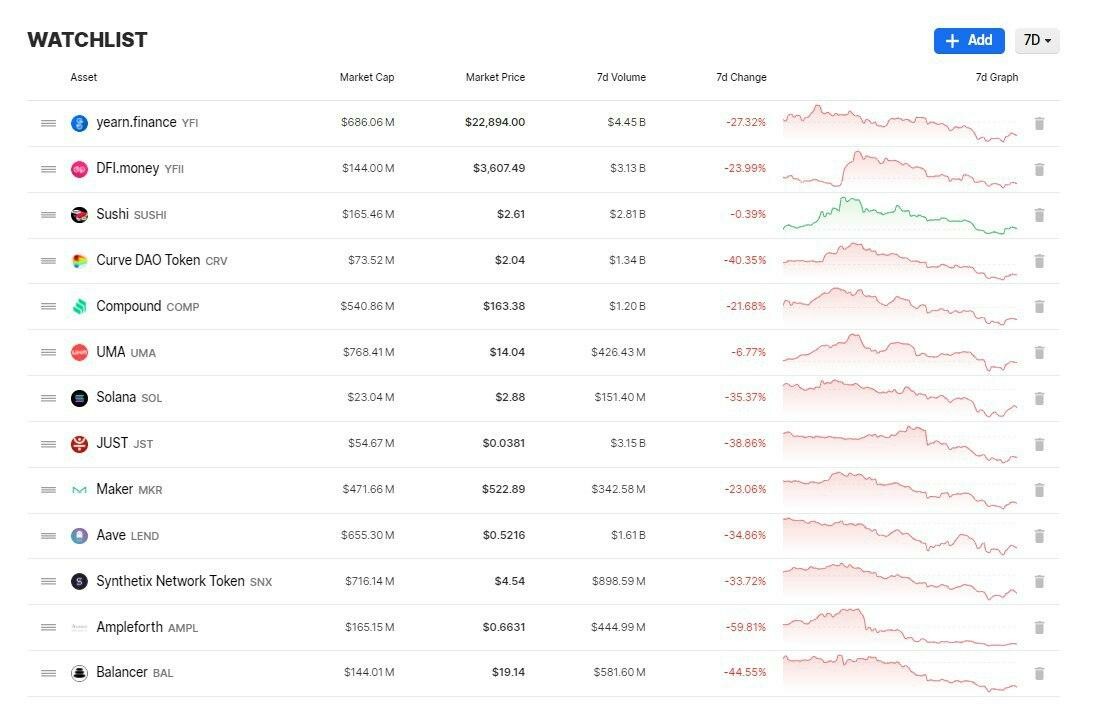 Also, criptonoticias says that the downward trend is predominant in almost all altcoins, while tokens related to decentralized finance projects (DeFi) gain prominence. The few cryptocurrencies that increased in price had growth of up to 70%.

Then, the most appreciated cryptocurrencies of the week are led by UMA, a protocol that builds an open source infrastructure for financial contracts on Ethereum, which will be supported on the Coinbase and OKEx exchanges.

Tron (TRX) follows, with the launch of a new token; and yearn.finance (YFI) which offers insurance for DeFi tokens.

Many continue to wonder what it was that really made the market stumble. As the Buda team let us know, miners sold a lot of bitcoin and as reported by CryptoQuant, in recent days miners moved unusual amounts of cryptocurrencies to exchanges.

As the amount of bitcoins for sale increases, it is inevitable that their price will go down.

In turn to the previous point, we have also seen that Bitcoin has been deleveraging from the movement of economies, and has approached the behavior of gold as an independent store of value, it is still indexed to the stock markets, so the abrupt fall of the last days of the S&P500 and other stock indices also hit hard on the queen mother of cryptocurrencies (and all the others, as a consequence).

In the same line of thought, criptonoticias says that the price of bitcoin (BTC) registered a significant drop this week with a decrease of around 8%. The cryptocurrency traded below the $ 11,000 barrier, which it has held in recent weeks.

The value of BTC reached $ 10,142 on September 3. When consulted by CriptoNoticias about the situation, the Venezuelan trader Alberto Cárdenas considers that the downward trend could continue in the coming days due to the fact that the dollar bottomed out and could begin a recovery process.

Ethereum (ETH) for its part and as explains the news, also suffered a setback. Its average fall is 2.7%. The price started at $ 394 on August 29 and closes at $ 384. This week the Poloniex exchange announced the launch of Ethereum cryptocurrency futures, with a tournament in which it will distribute $ 30,000.

As we explained in our full review, So far Ethereum has corrected approximately 28% since its last rally. On the hourly chart a new phase of reaccumulation can begin between 368 and 391; zone bounded by the EMA200 and the EMA300 respectively.

Indicators begin to show reversal signals, marking the asset as oversold. We don’t recommend a positive long input yet. It is very necessary to wait first for the reversal of Bitcoin that so far is being analyzed with the closing of the GAP of the CME at approximately 9850.

If you still have doubts about what may happen with Ethereum in the next few days, we invite you to read our complete analysis called “Premium Ethereum Technical Fundamental Analysis After Market Crash”.

This week and according to Criptonoticias, the news spread that the UMA token will be supported on the exchanges Coinbase Pro and OKEx. The information was first published on the Coinbase blog, through a press release. Simultaneously, the price of UMA began a noticeable rise from September 1. Average growth was 70%.

According to Coinbase, the UMA trading will begin on September 8. The price of the cryptocurrency peaked at $ 27.75 on September 1, when its market capitalization surpassed $ 1.3 billion, placing it above other DeFi.

The project, which seeks to build an “open source infrastructure for financial contracts on Ethereum,” was also listed on OKEx’s platform, according to the exchange’s message on September 4.

According to the UMA technical document, its infrastructure is made up of two main parts: financial contract design and Data Verification Mechanism (DVM).

The former allows users of the platform to create synthetic tokens, while DVM is a decentralized oracle service. As of this date, the UMA market capitalization is USD 1,013 million and the daily volume is USD 16.3 million.

Decentralized finance platform Yearn Finance, says Criptonoticias, launched an insurance incentive for six DeFi tokens: Aave, Balancer, Compound, Curve, Synthetix, and its native cryptocurrency, yearn.finance (YFI). The information was published on Twiter on August 31 and drives the growth of the token during these seven days, with an average weekly advance of 53%.

YFI’s growth has been steady since August 30, reaching a peak of $ 38,925 on August 31. The price boom has been observed since July and has produced about six forks and knockoffs of the platform.

Yearn Finance’s proposal is to offer support through yinsure.finance insurance for yield farming schemes. Most of these projects are unaudited, putting funds at risk for vulnerabilities in smart contracts. The insurance is offered in association with the decentralized insurance protocol Nexus Mutual.

To get a quote from yinsure.finance, users need to access the platform and connect their wallet. When selecting one of the six hedged tokens, they must choose a time period between 30 and 365 days and the amount for which they want to be hedged in ETH or Dai. YFI’s market capitalization is USD 830.5 million and daily trade is estimated at USD 171.7 million.

Justin Sun, founder and CEO of Tron, reported this August 31 about the creation of his own token to venture into DeFi.

It is the SUN Genesis Mining project. From this announcement, the price of the cryptocurrency tron ​​(TRX) began a gradual rise and its average growth exceeded 50%.

The name of the new cryptocurrency is inspired by the founder’s surname and will be called SUN. Although, according to the Tron Foundation blog post, it is also related to the Sun (by translating the word into Spanish).

The token, designed as a meme that mimics the face of Justin Sun inside a sun, will be officially launched this September when it is expected to be used within Tron’s DeFi ecosystem.

At the close of this report, the market capitalization of TRX is USD 2,568 million and the volume in 24 hours is 2,437 million dollars.

The NEM ecosystem remains focused on the upcoming launch on Symbol’s mainnet. Thus, while they await the allocation of the tokens of this platform (XYM) that will take place from September 15, NEM’s cryptocurrency, XEM, remains in the top of the most appreciated for the third consecutive week. The average weekly growth was 35%.

In light of the growing interest in decentralized platforms, the NEM team claims to be exploring how to take advantage of this trend. Therefore, it proposes Symbol as a platform that can work in this market and makes it available to those interested in launching DeFi projects.

In a NEM blog post, the features of Symbol are mentioned, which will be released next December. Its scalability, liquidity, guarantees and mechanisms to reduce volatility stand out as requirements that make it suitable for DeFi. To date, XEM’s market capitalization is around USD 1,238 million, with a daily trade volume of USD 131.5 million.

A report from the market research firm Santiment, published on September 3, focuses on the 20 most prominent platforms during the month of August.

In terms of activity and development, it includes Gnosis, as well as Maker, Augur, Status, UMA, and Aragon, among others. Upon being included in the list, the gnosis team (GNO) retweets the information, while the cryptocurrency registers an advance of 28% in the week.

In his report, Santiment points out that on a monthly basis he focuses on platforms with “pure ERC-20 tokens”, that is, “those projects that are committed to developing on Ethereum and that do not yet have a functioning main network or exchange of tokens imminent.

It included Gnosis because its products reached several milestones in the month of August. This, while GNO records a continuous advance from September 1 when it reached a peak of $ 71.51. The price remained stable the following days and closed at USD 49.78. Gnosis milestones include the $ 1 billion mark in funds deposited in the Gnosis Safe Multisig wallet, and the increase in GNO volume in the Omen prediction markets, with more than $ 320,000 wagered on the Ethereum launch. 2.0. GNO’s market capitalization is $ 57.8 million and daily volume is $ 918 million.

Another report tells us that Uniswap surpasses Coinbase. The 24-hour trading volume across the popular decentralized exchange surged past Coinbase this past week, in what some are calling a DeFi flippening.

A important point and according to data from Glassnode says that , the number of daily Ethereum smart contract calls initiated by other contracts has more than tripled in just three months.

And in that same line of thought, he Ethereum 2.0 testnet, stress-tested by a clock sync incident last month, now has 41k+ active validators and 1.3M+ ETH staked.

Another major report says that DEX volumes soared in August to surpass $ 11 billion for the month. The roughly $ 11.6 billion in volume reflects a 152% month-over-month increase compared to July’s $ 4.4 billion, according to data published by Dune Analytics, which tracks volumes in the DEX sector.

Also, The ratio of spot trading volumes on decentralized exchanges (DEXs) compared to centralized exchanges rose for another month in a row, eclipsing 6% for August. July’s ratio was 3.95%, as previously reported by The Block. The ratio broke out of a steady pattern above 1% starting in June, when the ratio more than doubled from May’s 0.84% to 2.10%.

But the most surprising thing he says the report is that In August, the aggregate supply of stablecoins passed $ 16 billion (up from a base of effectively zero within two years’ time), while stablecoin transaction volume on blockchains surpassed more than $ 114B in the month of August alone — a 4th consecutive monthly all- time high, and more than five times the average monthly volume in 2019.

So far through 2020, more than $ 440 billion worth of volume has been transacted with stablecoins through a public blockchain network.

The latest statistics are really showing that the technologies of the new global and digital economy are gaining strength. With this we recognize that many investors are still on the path of traditional markets, but we have to say something to them: do not be surprised when your greatest asset in the coming days is a token of the Etherum network.