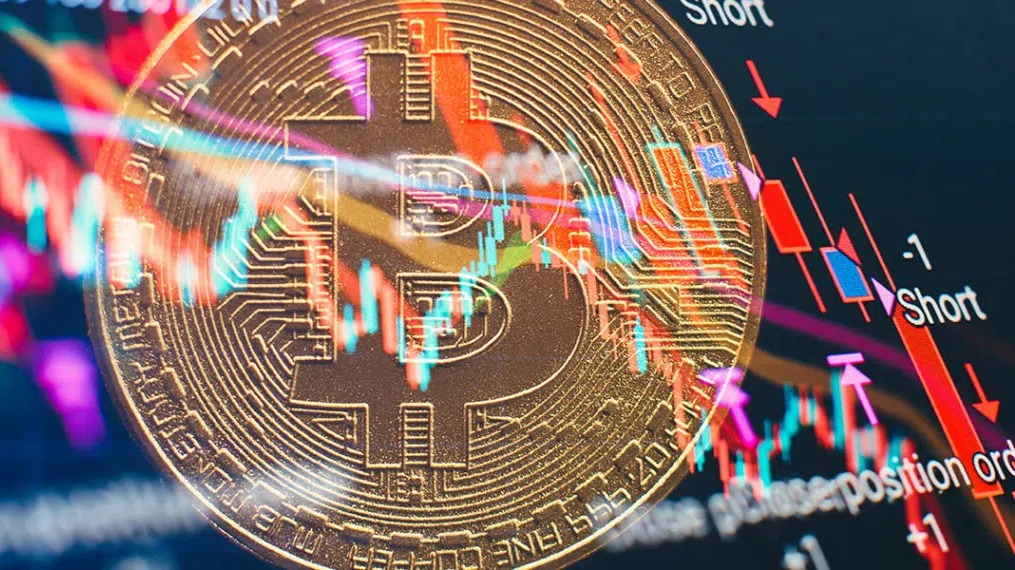 Bitcoin (BTC) and cryptocurrency markets continued in a declining trend this Monday, June 13, on the prospect of rising inflation and an imminent interest rate hike by the Fed. The price of bitcoin fell on Monday at $22,800, its lowest level since December 2020.

The first cryptocurrency by market capitalization thus registers a decline of 67% from its historical maximum of November 2021. Historically, the percentages of decline in the price of bitcoin from its previous historical maximums had been following a decreasing trend, until the fall of this Monday.

The declining trend was also reflected in the rest of the cryptocurrency market and in the prices of major stocks. The cryptocurrency market capitalization fell 50.66% since the beginning of the year and stood at USD 963,768 million, in figures from CoinMarketCap. It is the first time that the market value of cryptocurrencies has fallen below a trillion dollars since February 1, 2021. The Nasdaq index, for its part, has fallen 2.4% in the last 24 hours.

The bitcoin relative strength indicator (RSI) is also at minimum values, as analyst PlanB highlighted on Twitter on Monday. The RSI compares the magnitude of the days in profit with the days in loss, in order to determine if the asset is oversold or overbought. An asset is overbought if it has gone up a lot in a short time and it is considered oversold if it has gone down a lot in a short time, as might be the case right now.

According to the chart, the current value of RSI is the lowest in the history of bitcoin, 43.7. Two previous lows of the bitcoin RSI in 2015 and 2019 marked the bottom of the bitcoin price in a bearish time.

The market capitalization of bitcoin decreased by 11% in the last 24 hours to stand at $450 billion. In conjunction with the sharp decline in the value of bitcoin, there has been a rebound in the dominance of that cryptocurrency, which has increased from 40% to 47% so far this year.

This means that despite the market decline, bitcoin has strengthened against altcoins. Facing bitcoin's 50.7% market cap loss in 2022, altcoins are down 60% in figures from CoinMarketCap.

In what appears to be a direct reaction to the sharp decline in the price of bitcoin (BTC) and the rest of the market, the hashrate, which is the processing power of the network, has fallen almost 10% in just four days.

According to the graphs produced by the Bitcoin mining analysis company Braiins, the sum of the computing power with which transactions are processed in the Bitcoin decentralized network has dropped 9.9% since last June 9, date when it touched, for the first time, the 241 EH/s.

At the closing of this note, the indicator is at 217 EH/s. In total, 24 EH/s have been lost or disconnected from the network. It is remarkable, considering that only the public mining companies in the United States with the highest hashrate add up to a total of 15 EH/s. 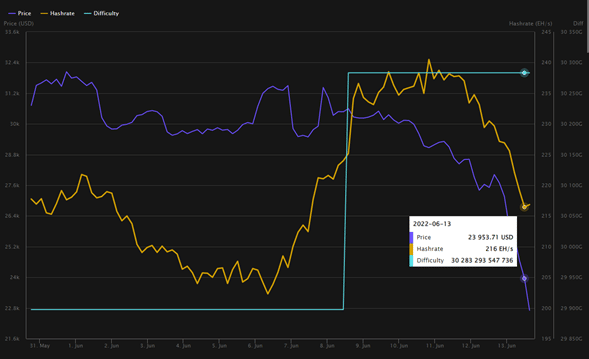 If you look at the graph below, the origin of the fall dates back to June 11, 2022, when, after reaching 241 EH/s, a wave of accumulated drops began that, in just 72 hours, led it to lose twenty of billions of hashes.

Glassnode, another firm specializing in market analysis and decentralized networks, agrees with Braiins on the hash rate downtrend.

According to this company, the indicator is 193.98 EH/s at the time of writing this article. That is 28 percentage points below the all-time high of last June 9, as a result of an increased drop seen from just two days ago.