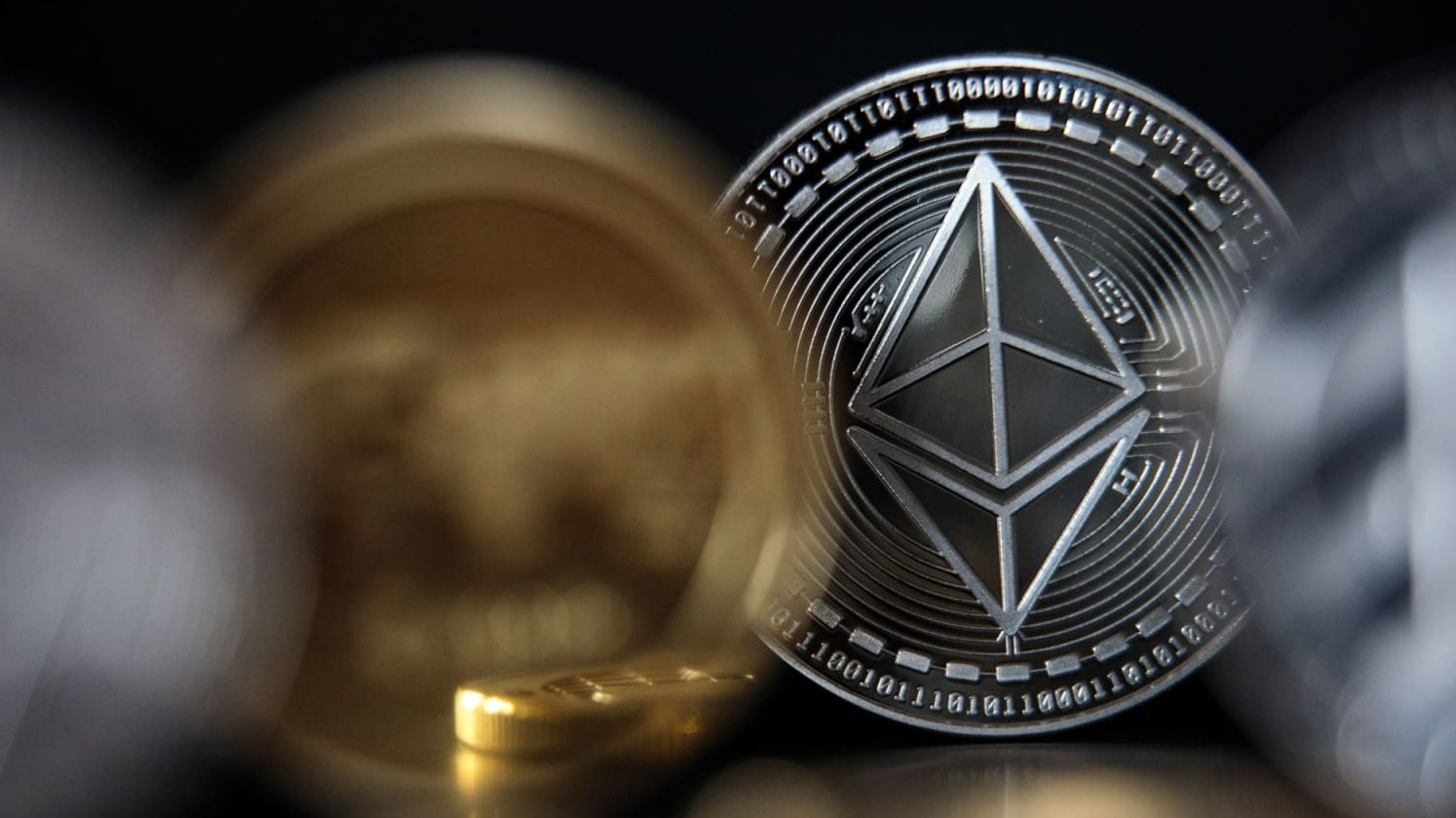 It's pretty crazy to consider that I am writing about Ethereum and my first post is more or less information an ETH head would know like yesterday.

The thing is: I am a new convert.

Although I've held crypto for years, I have never really delved into the technology rabbit holes of any particular blockchain, save XRP. (Now, don't jump at me. XRP has its use cases as a potential global payment system that can replace SWIFT. That's their objective and they are very clear about it.)

So this quest began with a question that I published on this sub-reddit thread: 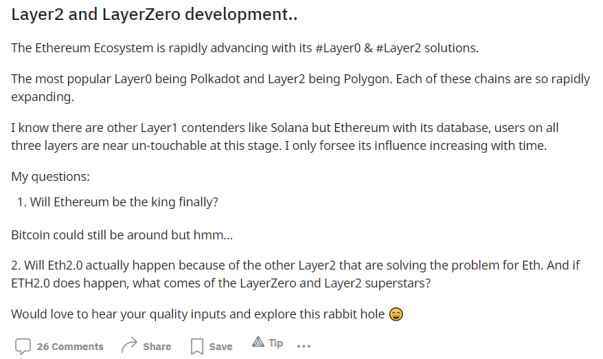 I received some good inputs of course and this caused me to consume a few web pages worth of data. I am writing a blog to pen down my discoveries, for future reference, and in the process, if it helps someone with the same questions, then hey, here are the answers ;).

Let me paste this  subreddit comment to calm all of you who are scratching your heads now: 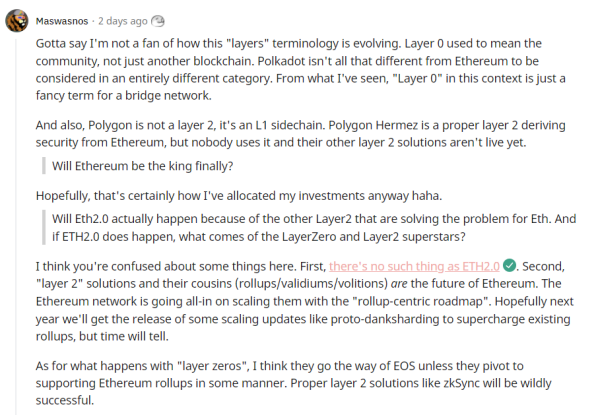 It can all get confusing because of the usage of the various terms, and that's ok. :) Let's dig in a bit further. 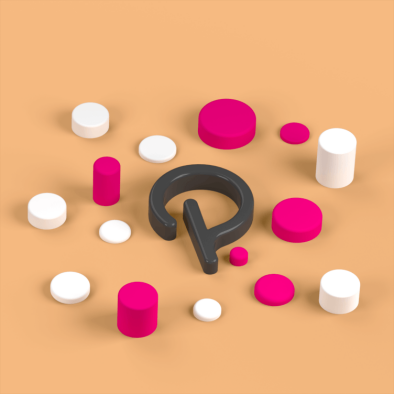 I was under the assumption that Polkadot and Cosmos were Layer Zero solutions that were created to help Ethereum. As ridiculous as that sounds, yes that's what I was led to believe. Perhaps there is a story behind Polkadot advertising itself as Layer Zero, but that's for another day.
DOT is not even an ERC20 token. It has nothing to do with the Ethereum blockchain.
From what I understand, Polkadot is a blockchain by itself that focuses on interoperability. Its parachains are individual blockchains that run parallel within the Polkadot network. These Parachains are connected to and secured by a central Relay Chain. Parachains also share and benefit from the security and scalability of Polkadot. A parachain can connect to other networks like Ethereum via cross-network bridges. I have used this CoinMarketCap article as a resource for this information. Let me insert a sentence directly from the article:

Polkadot was designed to be a layer-0 multi-chain network, meaning that the central Relay Chain provides layer-0 security and interoperability for up to approximately 100 layer-1 blockchains connected as parachains.

Hence, Polkadot has nothing to do with Ethereum. Polkadot is a separate blockchain by itself. PolkaDot is not the Layer Zero for Ethereum (layer 1). Polkadot has its own use cases.

Borrowed that cool pic from this cool blog post : https://blog.ethereum.org/2022/01/24/the-great-eth2-renaming/
Everything you want to know about ETH 2.0 is in there.

Now I know that ETH has two layers currently. The first layer is the execution layer - the one which has had all those scalability limitations(PoW). This is ETH as we know it. The second layer is the consensus layer (PoS) which started with the introduction of the Beacon Chain.
The first layer of ETH does have a thin consensus layer but it is not complex enough to handle the workload of coming to a "consensus" due to its "thin" nature. This is where the second layer comes into play: its ability to specialize in being a consensus layer. That's what Beacon Chain introduced.

This second layer is not an alternative solution to ETH. In fact, the "merge" is when both layers - execution (mainnet) + consensus (beacon chain) - come together and work as one. That is what they call ETH 2.0.
Well, it confused the heck out of everyone, so they just went back to saying ETH and labeled the event yet-to-happen as The Merge.

Conclusion: To fix ETH scalability issues, a separate layer dedicated to coordination work/consensus work was developed and now both layers can work together. The end result is a very advanced blockchain solution. Ethereum is definitely in here for the long run.

Blockchains are monolithic in nature. This means, that there is only one layer and this blockchain attempts to solve three properties of Scalability, Security, and Decentralization in this single layer. Each of these goals is a complex task in itself. And hence as discussed in the point above, there are limitations to a blockchain when it follows a monolithic (single layer) structure.

Now, what if we could get a specialized department/layer for these separate goals, and bring them together as one in operation? That's what Layer 2 models aspire to do.

A layer2 is a separate blockchain that "extends Ethereum". Here is a detailed look at Layer 2: https://ethereum.org/en/layer-2/

There are two approaches to Rollups: Optimistic Rollups and zkRollups.

Here is a video from Finematics that explains Rollups better.

Anything you can do on Ethereum Mainnet can be done on a Layer 2 network but up to 100x cheaper.

A sidechain is an alternate blockchain to a parent chain. Plasma is a framework of child chains - it is a scaling solution for Ethereum (or any blockchain for that matter). You can read more on side chains and plasma chains here. 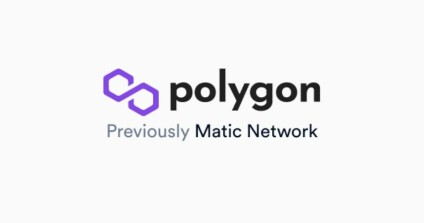 This brings me to the most popular network called Polygon (previously called Matic Network).

They are technically not a layer 2 solution by itself but rather a side chain + plasma chain. At least, this is my current understanding xD!

But they have brought on board the Hermez zkRollup and here is the link: https://polygon.technology/solutions/polygon-hermez/

So technically, Polygon is a sidechain that can also become a Layer2 solution via Polygon Hermez.

Polygon is becoming a giant by optimizing the Ethereum blockchain with its own solutions. The rate at which the company is growing is impressive, to say the least.

Here is a short clip by Vitalik Buterin and Lex Fridman:

This concludes my Ethereum findings for now. It is only the tip of the iceberg. I am so amazed at the rate at which technology is advanced. More specifically, blockchain technology. I am absolutely impressed with Ethereum, to say the least.

I hope you enjoyed this article.

Would love to hear from you in the comments. Feel free to share this. :)

Memoirs and revelations penned from my crypto journey.