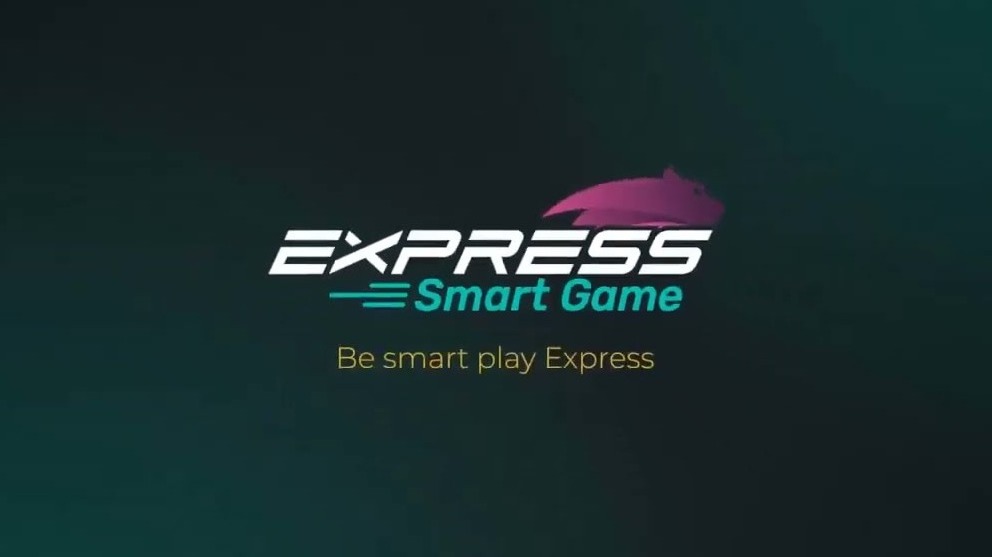 In recent days, a rather hype topic has been actively discussed on the Internet: how to make money on Express.game. This crypto-game broke even into the arbitrage community — almost all chats and Telegram channels are full of schemes and referral links. Despite this, the players themselves claim that this is an obvious crypto pyramid.

Against the background of “native” advertising, questions and other stuffing, interest has grown among those who have never been interested in cryptocurrency or have not participated in such financial pyramids. The developers promise passive income, payback in 2 days and many other benefits that attract those who are looking for money on the Internet.

The developers of this “game” are Forsage, an MLM project that was able to gather a community of 2,000,000 people in just three years. We have studied all the information about Express Smart Game: user reviews, the opinion of crypto bloggers, information from the project developers. And we have prepared material for those who want to try to make money on it or assert that the game is not worth the investment.

What is Express Smart Game?

According to the developers, Express.Game is the first smart game that allows you to receive income directly to your wallet. The game has 16 levels and each participant can activate any of them. The higher the level, the more expensive the entry and the greater the passive income. 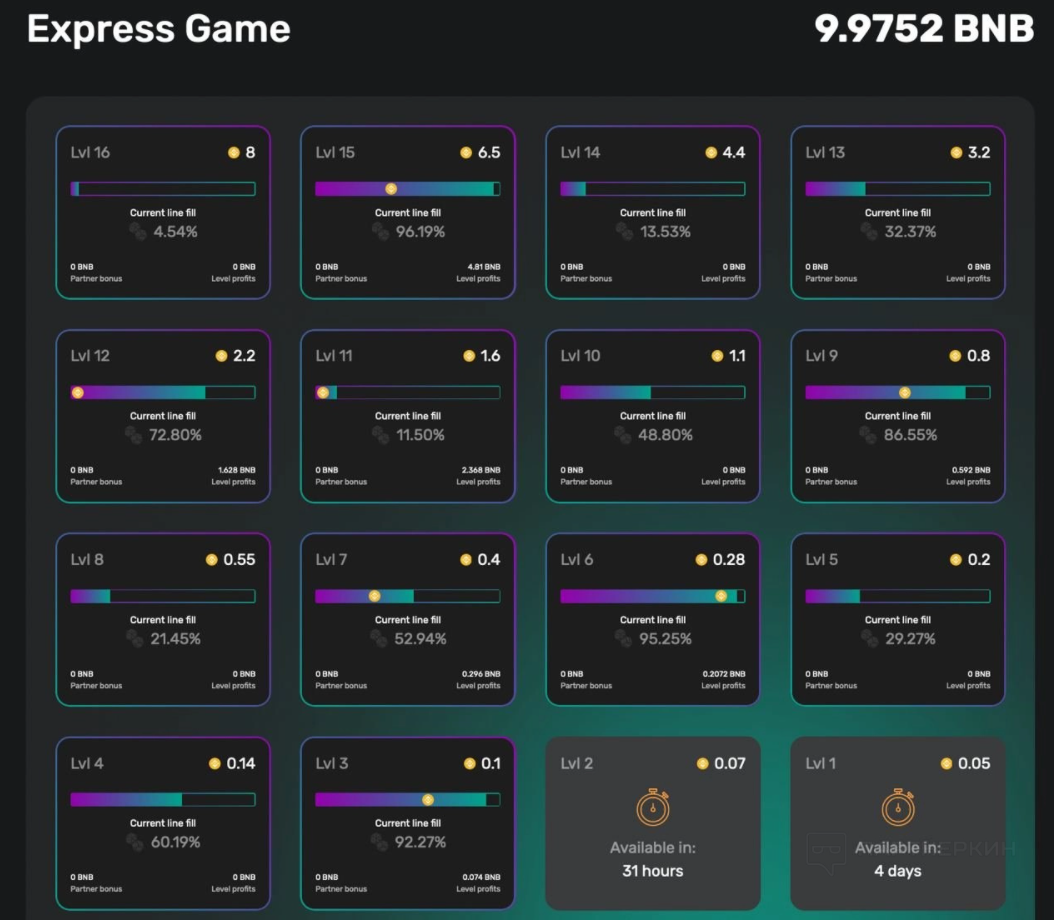 Levels became available from highest to lowest. Now you can register in levels 16 to 3. Within a few days, the last two levels will open.

You can activate any number of levels and receive income from them. It is believed that the earlier a person entered the game, the more chances he has to earn. In general, according to the classical scheme.

The user receives a reward to his wallet when new players appear at the selected level. For example, you start at level 16 and you will receive your first reward only when a new player selects level 16. Players receive 100% of the activation cost, but according to the following scheme:

These 26% are also divided among three participants:

When a player receives two basic rewards, but the higher level is not activated for him, then his bonuses will be transferred to another player. If you believe the statistics, then in a day the project was replenished by almost 25,000 people, and the turnover increased by 233,500 BNB. 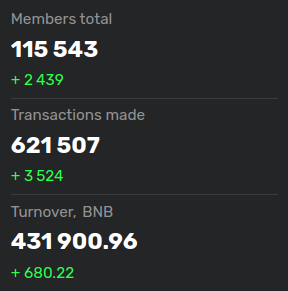 How to participate in Express.Game?

If you are still going to participate, then you need to get one of the four wallets:

The next step is to replenish the balance by the amount with which it is planned to start the project.

Additionally: It's also better to immediately decide how much you will enter the game, so as not to waste time on additional transfers, if a couple of dollars are suddenly not enough to reach the next level. And deposit a little more on Metamask than the cost of the level, as the blockchain charges a small commission (GAS) for transactions and may not be enough for a couple of cents if you deposit an even amount.

Step 1. Registration in the project

The next step is choosing a wallet to work with, we will show it using MetaMask as an example, but the principle is the same for all four. After choosing a wallet, you need to confirm the connection in the MetaMask interface by clicking "Next" and "Connect". Then click "Quick registration" and select the level to which you want to join. Then we confirm the operation in our wallet and wait for the end of the transaction.

This step is optional, but after the transaction is completed, the system will offer to connect to the Telegram bot. It will be possible to receive notifications from the site directly to the messenger. 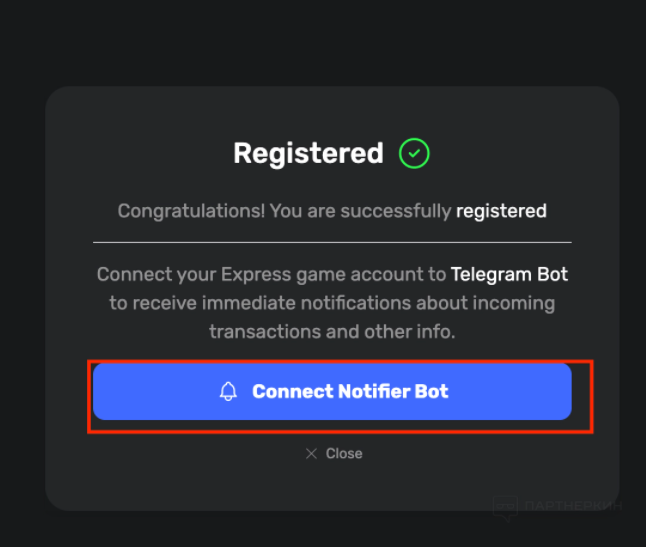 How to profitably choose levels

After we return to the official website of the game and click "Login Your Account". On the page that opens, you can see the cost of the levels and the scale of their completion. 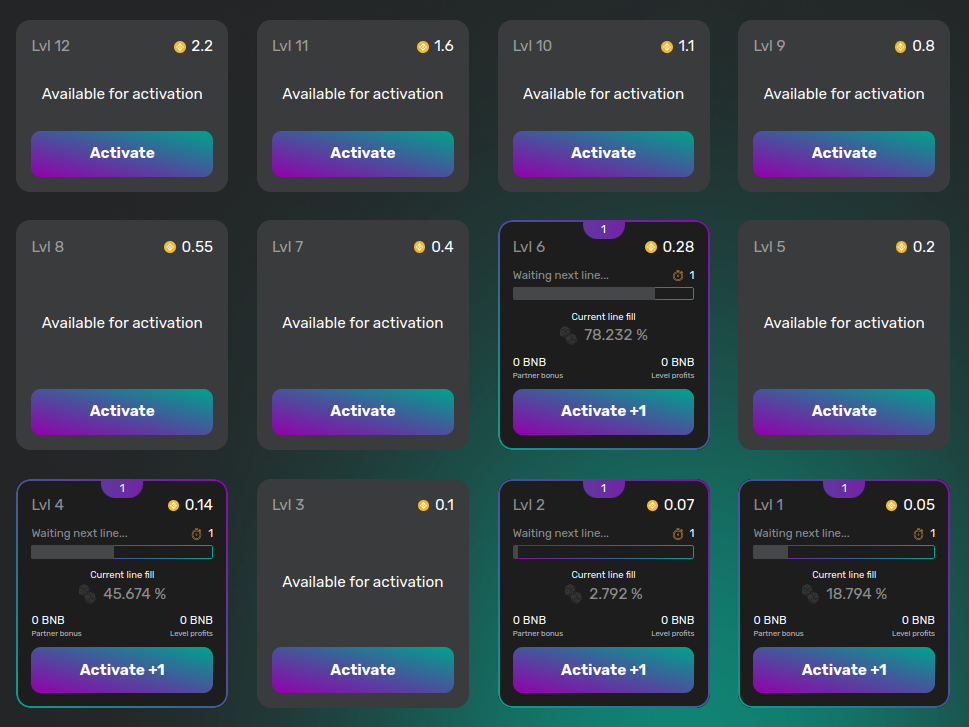 After buying a level, a gray bar will appear - this is the first stage of the game. Before the level is frozen, you will receive two times 74%.

They can be left and withdrawn from the wallet, or you can invest in level 6, which costs 0.28 BNB.

After buying the 6th level, we will have two levels and 0.016 BNB, but most likely this amount will go to a commission when buying new levels. Now we are participating in two waves, from the 5th and 6th levels:

Now we buy the 7th level and so on until a new one opens. As soon as a new lvl opens, you need to get there as quickly as possible.

What are the risks of investing in Express Smart Game

You need to understand that Express.Game is a vivid example of the very pyramids that many people hate.

Is it possible to make money on Express Smart Game? Yes, if you invest in the project on time. You can find reviews that people get money from their investments, and some have already paid off. But you can also burn out here: the pyramid can collapse on you and you will not receive any income. You need to understand that the money you invest should not be the last.

No need to take loans, borrow from friends or deny yourself buying the right things. If there is an amount that you don’t mind losing, then it’s better to weigh everything and think it over again.

The project is currently in prerelease, and the official launch is scheduled in 2 days. But now thousands of people are investing in the game. In chats, they discuss that the project developers have purchased advertising from millionaire bloggers, and from some large crypto platforms.

We would like to remind you that we do not encourage anyone to invest in this project and do not give you any guarantees. Yes, the opportunity to make money in Express.Game is discussed by many well-known bloggers and ordinary users. You can find a lot of feedback on how people have already paid off their investment, but you need to understand and evaluate all the risks that you may expect. Of the obvious: the collapse of the pyramid or scam. Of the non-obvious - the chance of hacking your wallet if the developers are not very honest.

my personal blog about crypto and defi