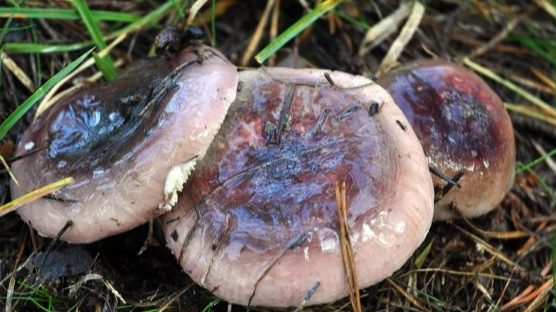 Russula turci - Cap 30 to 100 mm in diameter, initially spherical, hemispherical, later flat, with a shallow center (often with ocher discolored spots), lilac to purple, often almost black in the middle, colorfully concentrically cut off. Surface smooth or slightly radially wrinkled, dull, slightly frosted in dry weather, slippery in the wet period, crimped on the edge; skin removable up to 2/3 of the radius.

White flesh, slightly yellowing, slightly lilac under the skin. Only when young, quite strict, it softens soon; has a weak taste and a slight odor of iodoform, especially at the base of the stalk.