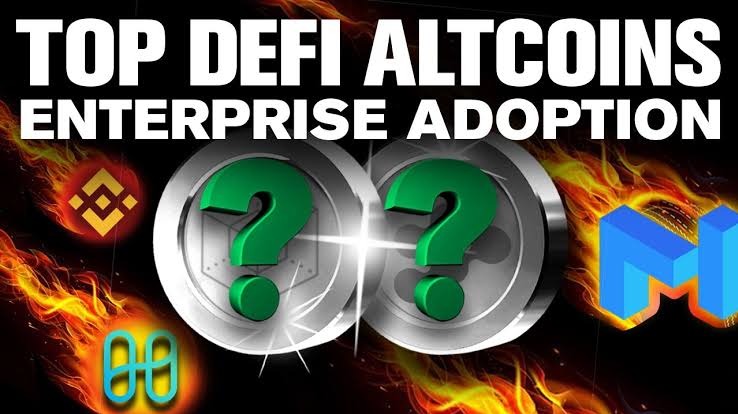 With the coming of Altcoin season, many altcoin lover are in a rush of accumulating coin  of their choice and hence it has became  the talk of the town. Many altcoin have a high potential of exploding with more than 100x profit in days to come.Inside the Altcoin community there is something called DeFi altcoin, Altcoin which are based on Decentralised finance ecosystem and  build under the Ethereum blockchain.

In traditional finance we have to go through  third party in order to approve our loan applied. This is manily because of the centralised utility. Hence in this case when two people with same income apply for a  loan, one will get approve and one will not depending on thier job occupied. But here in DeFi there is  no need of such  approval. The loan at defi is secure through a smart contract collateral.

DeFi include banking, wallet, trading, exchange, payment, investment tools etc.Defi project includes wide varities of coin. The period of DeFi was started from 2019 and in 2020 it has reach its peak level. And it was from 2019 that users had figure out its used and its opportunity of gaining profit. Unlike other coin that grows their value as per their price, defi has way more than just investing and hodle it.

Here are my top 8 DeFi coin which have a very high potential to explode in days to come.

If the Defi project continue to increase its value and grows , ETH will be the safest coin by far. Many of  this top coin are build under the Ethereum blockchain. In fact Ethereum has the largest development community outside that of bitcoin and is also  transitioning from POW to POS protocol.Making it one of the most user friendly and profitable staking coin.

So people are working on it by accumulating at least 32 Ethereum inorder to qualified for staking. In addition to this the Ehereum unique address continue to grow, which is  a good sigh for Ethereum. So Ethereum will be the best DeFi coin to hold for a long term profit and  investment.

Just like Ethereum if DeFi project remain as one of the hot topic in crypto space chainlink is another best DeFi coin in the list.it is a decentralised oracle service which aims to connect smart contract with data from real world.

It powers the Chainlink decentralized oracle network. Thus allowing smart contract on Ethereum to securely connect to external data sources, APIs, and payment systems Since blockchain cannot acess data outside their network, oracles are needed to function as data in smart contract.

It get its name more recognition like that of Ehereum.When talking about DiFi ecosytem we only think of ETH but another coin to be mention is Chainlink. So when oracle is on a point of failure in cryptocurrency space chainlink is trying to solve it.

Just like bitcoin is considered to be the king of cryptocurrency , Maker is considered to be the king of DeFi ecosystem. It is one of the moat valuable coin in cryptocurreny.Maker  token can be bought from kucoin and OKex .The main purpose of maker is to create decentralized digital assets that can be  tied to the  real currency, gold, etc. Recently maker suffer during the bitcoin crash in 2020. But now it has bounced back and expect to move forward with huge potential.

one of the most impressive thing in kyber network is inspite of the entire market dropping behind kyber network is  still able to hold 90% gain for the year. This is something rare any ongoing crypto project can achieve. Invetor can buy kyber network from Binance. KNC price has a massive rise of 16% in the past 24 hours.

Republic protocol(REN) is an open protocol that enables the transfer of value between any blockchain.  It is the next evolution of Atomic swap. Infact Ren swap are 100 times faster then its predicessor. Atomic swap is the conversion of one coin to another regardless of blockchain they are on.

Ren offer swap on BTC, BCH, ZCASH and ERC20 token. They are still panning to add more blockchain in future. Other swap exit for all kind of reason but REN swap purpose is basically to allow users to top into blockchain liquidity for DAPPs. Using REN user can easily swap toke from one blockchain to another using its exsiting smart contract. without having to wory bout wrapping or unwrapping the token like in WBTC.

Kava is a cross-chain DeFi platform created by Maker DAO in 2014. It offers collateralized loans and stablecoins to major crypto assets, including BTC, BNB, ATOM, etc. Kava has partnered with chainlink and this will make DeFi platform more stable and secure.

Unlike others kava is not built under the ETH blockchain. But was build in a Binance chain. The thing is people often assosiate DeFi with ETH for most of the project. But the world of DeFi is growing outside the ETH blockchain. Kava is also available in binance and Bilaxy.

Founded in 2017 origin protocol is a decentralised market place of sharing economy. Its Origin Tokens (OGN) can be used to pay for goods and services. Origin protocol has been quite a hype lately. One fuction of Origin protocol is that it can fixed the payment problem faced by uber driver  form the uber company.

Uber takes a percentage of profit from both the rider and driver just by offering theire uber app hence disrupting the taxi business. Uber driver does all the work and are not geting paid. Origin protocol on other hand disrupt uber and any other corporately owned market place fixing the problem faced by the taxi driver in cas of uber. OGN price has been increased by 11% in the last 24 hours

Hydrogen (HYDRO)  is an open source project built on top of Ethereum  blockchain. Its project consist of  global community of developer who are looking to make blockchain adoption simple  by developing project like P2P payment, point of sale, credit saving and tokenisation .

Hydro protocols are the life force of the ecosystem. Those protocols are in various form like  Raindrop, Snowflake, Tide, Ice and Hail . The project has been since 2018. And has a huge potential geting as high as 167 satoshi.

It is available in Bitmart and coinex exchange. One interesting thing about hydro project is that it does little of everything making it one of the most bullish DeFi altcoin in the market.

There are many other popular DeFi coin with high potential and among them these are my top list.