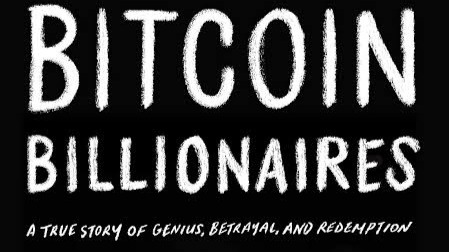 At first i thought bitcoin billionare might be a book about bitcoin history and its code or programe or whatever related to bitcoin . Not only me people might also think the same thing at first.

But don't just the book by its cover.when i goes through the book  its just  like fire and water, totaly different. I would recomend this book only for those people who are interested in entertainment story which revolved around the bitcoin. Not for any technical minded bitcoiners.

This book is not regarding bitcoin it doesn't relates to any bitcoin program or bitcoin related terms or topic. Doesn't explain anything about bitcoin history its roadmap, doesn't pop up any technical code of bitcoin and nothing about the market economy of bitcoin.

Instead  its mainly about the biography of Winklevoss twin. Who are among the top 10 bitcoin owner in the world.Here the author explain about how they become billionare by investing bitcoin, how they own bitcoin and the up down story behind it.

Here is a brief about it.

"At first the winklevoss twin idea of creating  a social media network facebook was stolen by Mark Zukersberg. Hence they sue him and finaly got half of the amount of what they think it actualy worth. But no one in the silicon valley want to take their cash when they try to invest. But the twins think bitcoin to be a respectable and integrated into the regulated bank.Later they meet a person who help people buy bitcoin and they started investing bitcoin in his company. When the bitcoin hit 10000$ mark in 2017 they became a billionare. But zukersberg never saw it coming."

Ben Mezrich pened the book  with slick beauty. He structured the story as a sequence of a dramatic scene. It even has a very heart warming ending.There is also a brilliant cinematic chapter about  bank heist where the winklevoss split their bitcoin private key to keep bitcoin into three part.

Its such a nice entertaining story and i heartfully recomend reading it.