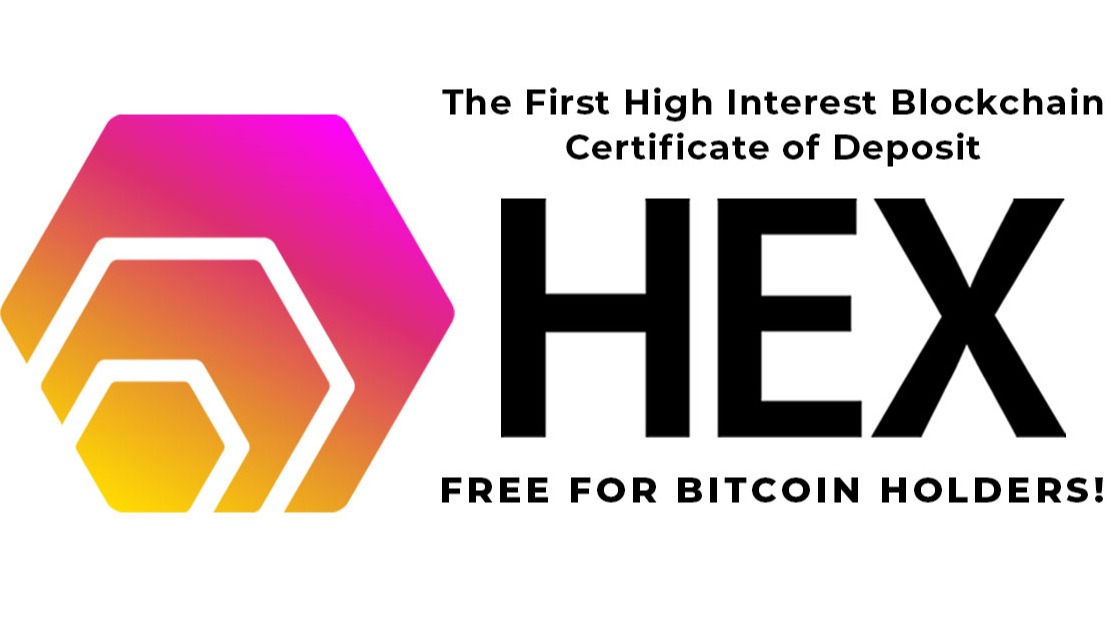 CDs, known as Certificates of Deposit or Time Deposits, are worth Trillions of dollars. CDs are worth more than gold, credit card companies, and cash. CDs pay higher interest than savings accounts, requiring money be deposited for a fixed time. Banks profit on poor customer service, early withdrawal fees, and auto-renewing you at worse rates. The % they pay you in interest doesn't keep up with the % prices increase. New USD is printed all the time, making yours less valuable. HEX replaces inefficient currencies, banks and payment networks with verifiably secure peer-to-peer technology. HEX takes the profit out of banks and government money printing and gives it to HEX holders.

HEX IS DESIGNED TO GO HIGHER, FASTER, AND RETAIN ITS VALUE. How? Use a computer science breakthrough to disrupt the largest markets in the world with a product of nearly infinite profit margin. Eliminate middlemen, users can transform Ethereum directly into HEX. Kick-start adoption, give Bitcoiners free HEX. Help small guys, penalize Bitcoin whales. Early claimers get bonuses, late claimers get penalties. Pay bonuses to referrers and those referred. Pay the unclaimed coins and interest to those who time lock their HEX. Longer and larger stakes get more shares and the price per share only increases. HEX aligns incentives, so the more people that participate, the better everyone does!

HEX IS THE FUTURE OF FINANCE, STAKE YOUR CLAIM! Buy Ethereum to transform it into HEX, claim for free if you have Bitcoin, or buy from someone who did! Stake HEX early, long and large, and watch it multiply!

Every feature in HEX is designed to increase its price and adoption. It's a positive feedback loop. HEX rewards most those who acquire HEX the earliest, stake more for longer and refer others to do the same.

Referred users get a 10% bonus minted and their referrer gets a 20% bonus minted. Staking Bonuses Launch phase only. Paid on day 353. We'reAllSatoshi

Stakers get all the unclaimed HEX. LateClaims

Each week a BTC holder doesn’t claim they lose 2% of it to stakers. SillyWhalePenalty

Only increases. Set by the maximum ROI any stake ever ended at. Staking

The longer you stake, the more you make. Up to 3x shares on a 3641 day stake. BiggerPaysBetter

Up to 10% bonus shares at 150M HEX staked. Compounding

Ending a stake to reinvest its yield never pays more HEX than having a longer stake. TruthEngine

FreeClaims start 90% staked for 350 days & can't EmergencyEndStake for them. Upgrade to a longer stake and receive up to 3x shares. Referral

HEX is the first certificate of deposit on the blockchain! HEX pays Trustless Interest with no counterparty risk. Given programmable money the first program should be interest.

Pays holders instead of miners. Staking HEX is like getting free mining hardware and electricity. Bitcoin and HEX comparison

No Satoshi (if he doesn't claim in 50 weeks) or Mt.Gox dumping on you. No inflation bug possible like bitcoin has had. Unit bias fixed. More distributed mining ecosystem. Whale penalty which gives whales coins to stakers, etc.

Around 12 million or more of the 18 million total BTC worth of HEX claims will be given to the stakers on day 353 by shares. And! It gets multiplied by the Viral and CriticalMass adoption bonus multipliers which can increase it up to 3x. The share price only goes up.

20% Speed bonus falling to 0% during the fifty weeks. Unclaimed coins paid to stakers 2% per week for 50 weeks. Every week you don’t claim, someone else gets your coins. Critical mass and Virality bonuses increase payouts to stakers so they make more HEX the more people that claim, than if less people claimed, even though they get unclaimed coins on day 353. Every pumpamental to lock up supply, increase adoption and price.

Hex has a lower inflation rate than Bitcoin, even after the rate was cut in half twice in its 10 years. The inflation is also delayed, because it's only paid on ended stakes, and stakes can last 10 years. Inability to trade staked coins increases the value of unstaked coins, and chance that some will early endstake and pay penalties to loyal stakers.

Let's say you want to make more bitcoin on your bitcoin. What are your options? You could lend your coins out and take the risk they're not returned, or you could try selling your coins for mining hardware and hope to get more coins back later. Lots of people have lost money trying either.

To earn interest on their Bitcoin, most users send them to a centralized third party, such as an exchange. There, coins can be borrowed to "short" the market. Sellers borrow the coins to sell, in the hopes that they can rebuy them cheaper before they have to return them, thus profiting from price decreases. These centralized parties are security holes that are often hacked, destroy privacy, or introduce fees if you want to get your funds out. Billions of dollars in coins sent to exchanges or lenders have been stolen. Not your keys, not your coins.

These centralized third parties and middlemen are so important to users seeking yield (making interest) that the companies themselves have made more profit on Bitcoin than its founder. Billions and billions of dollars of value has shifted into the pockets of middlemen. HEX fixes this.

This replaces these third parties with a trustless peer-to-peer to system. Instead of sending your HEX to an exchange so they can lend it out on your behalf to earn interest for you, you just lock it in same smart contract that minted all the HEX in the first place, and it credits you interest. If you're given programmable money, the first thing you should program is interest.

HEX pays interest to stakers instead of miners.

Some users try mining to make more cryptocurrency. Instead of sending your money to a foreign mega-corp to buy mining equipment which shows up late, used, or never at all, you can skip the depreciating asset and electricity bills and just stake your coins.

HEX is the first cryptocurrency with a chart of future sellable supply (expiring stakes over time.) This secures buyers confidence in future value of their investment.

HOW CAN HEX MAKE YOU RICH?

Understanding the AA lobby.
Imagine a bucket with 1 Billion HEX in it (which day 1 has.) Now imagine an empty bucket users throw ETH into. At the end of day your % of the ETH bucket gets that same % of the HEX bucket. Every day the buckets empty and start over for 351 days.

Making the most HEX.

Stakers earn a higher rate of returnthe fewer coins that stake. More coins staked, means a lower supply available on the market, which can mean a higher price. The above chart shows just the interest yield, The other bonuses are worth 50x-100x more than the interest during the first 50 weeks! Most of the profit comes on day 353 when the lump sum payment of unclaimed coins, late claim penalties, SillyWhalePenalty, along with the CriticalMass and Virality bonus multipliers apply to them all!

THE WAR FOR LONGER STAKES

You know how you get more interest for staking longer? LongerPaysBetter also amplifies your other bonuses including the massive claim phase bonuses! It's a war for getting in earlier at lower StakeSharePrices and longer/larger lockups to get more bonus shares than everyone else! Those who believe in the project the most gain the most bonus shares.

Note: Your ETH address is your HEX address. Claiming can only be done after the snapshot and after the claim tool is launched. (which should occur around the same time.)

Get your HEX NOW

Some new and old airdrops