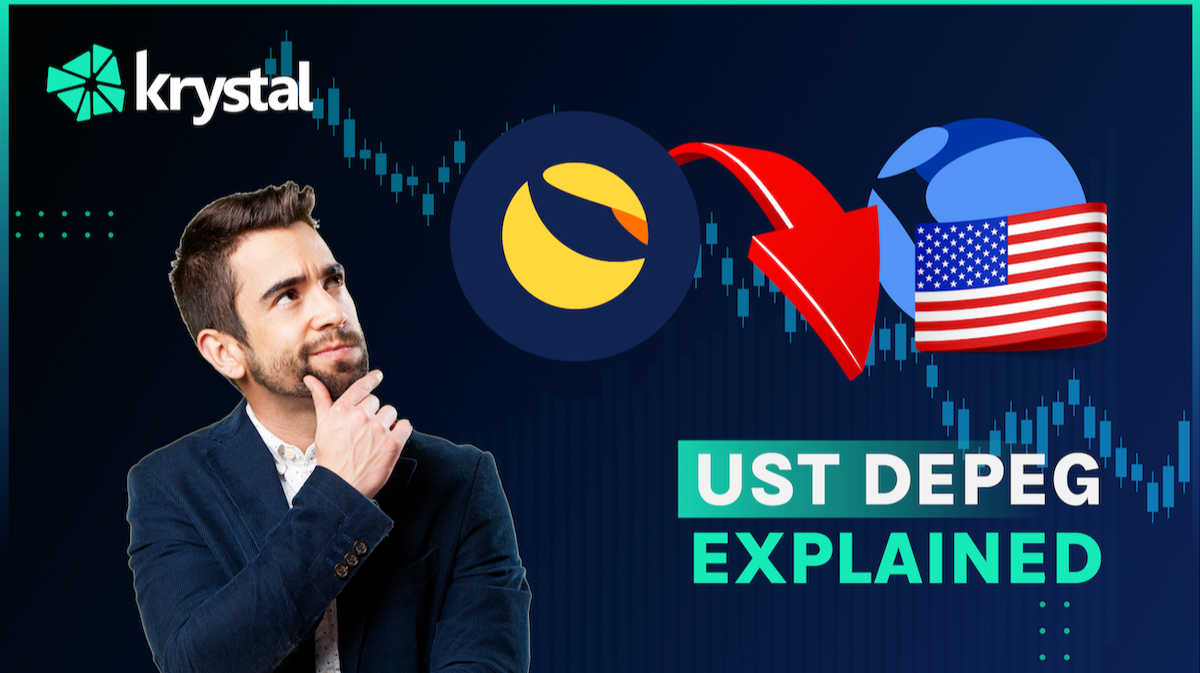 The crypto markets have been really volatile, and the Terra ecosystem has taken a huge hit.

Not long after overtaking BUSD as the #3 stablecoin, UST has started to lose its peg to the US Dollar.

Here’s an explanation of what happened to this stablecoin:

What is an algorithmic stablecoin?

In the case of UST, 1 UST is minted (or created) whenever $1 USD of LUNA is burned.

When UST drops below $1 USD, traders can burn 1 UST (i.e. remove 1 UST from circulation) to exchange for $1 USD worth of LUNA. This will reduce the supply of UST, which in theory should increase its price.

When UST is greater than $1 USD, traders can burn $1 USD of LUNA and receive $1 UST. This will increase the supply of UST, and in theory, it should decrease UST’s price.

Before this recent de-pegging of UST, there were only 2 occasions when this stablecoin lost its peg: December 2020 and May 2021. This is different from asset-backed stablecoins like USDT and USDC. In theory, for every USDT and USDC minted, there should be 1 USD in Tether’s or Circle’s reserves.

However, in reality, this may not always be the case.

For example, in a July 2021 audit done by Grant Thornton on USDC, it was found that only 61% of USDC’s reserves were in cash or cash equivalents! Algorithmic stablecoins attempt to make the stablecoin more decentralised,  where the peg is not maintained by a centralised entity.

Is the peg really stable?

While the peg has been rather stable, market volatility has affected it in the past.

The LUNA Foundation Guard (LFG) was created to protect the peg during such volatile times, by deploying certain funds that it has in its reserves.

LFG has been buying up multiple assets for its reserve, including BTC and AVAX.

You can view their entire reserves on this page.

How did UST lose its peg to USD?

The true cause of UST losing its peg is still unknown. There have been rumours that it could have been a coordinated attack, but that is still yet to be confirmed.

Some large firms like Citadel and BlackRock have been accused of orchestrating this attack. However, both of them have denied any involvement.

Nevertheless, here’s a breakdown of some of the factors that could have led to UST depegging from USD.

The Anchor Protocol has been extremely popular with its promise of double-digit yields for depositing UST.

While this has led to a huge inflow of cash into the Terra ecosystem, the yield is considered to be unsustainable.

With this increase in popularity of the Anchor Protocol, it has led to a huge demand for UST.

#2 Launch of 4-pool on Curve Finance

It appears to have started when the 4-pool was launched on Curve Finance.

This is a liquidity pool on Curve Finance, and it contains 4 stablecoins (2 asset-backed and 2 algorithmic):

On Curve Finance, you are able to deposit stablecoins into this pool, and earn rewards whenever a user makes a trade in the pool.

If newer stablecoins UST and FRAX can be traded 1:1 with more established coins (USDT and USDC), this will help to increase the legitimacy of these 2 algorithmic stablecoins.

Terra co-founder, Do Kwon, mentioned that he wanted to ‘starve the 3-pool’, which is a liquidity pool that contains 3 stablecoins: USDT, USDC and DAI.

This 3-pool has extremely high liquidity on Curve Finance, around $2.7 billion.

By offering greater rewards on 4-pool, it was hoped that liquidity would be shifted from 3-pool to 4-pool.

#3 Liquidity from UST was removed from Curve

In preparation for this 4-pool, about 150M worth of UST was removed from Curve Finance.

However, there was an $84M dump of UST, which is suspected to have been someone taking advantage of this reduced liquidity.

This $84M of UST was sold for Ethereum. A huge increase in the supply of UST in the market led to a decrease in UST’s price.

Due to the fear of this depegging, there have been large withdrawals from the Anchor Protocol.

The number of withdrawals could also have been due to the lowering of Anchor’s yield.

With so much UST in circulation, it has made things much worse!

Fear, uncertainty and doubt (FUD) have been widespread, and many people are desperate to get out of UST before it’s too late.

Due to this huge sell-off pressure, it could have prevented the price of UST from rising back to 1 $USD.

#5 Widespread adoption of UST may have caused problems

With UST rising in popularity, many exchanges have started to list this stablecoin. However, it was mentioned that the on-chain peg for UST never deviated.

This could mean that the Mint and Burn mechanism of LUNA and UST may no longer be able to maintain the peg, due to UST’s widespread circulation.

What has been done to fix the de-pegging?

Here are some of the corrective measures that were taken to restore UST to its original peg.

However, this did not bring up the peg back to $1 USD as expected.

Furthermore, with such a huge inflow of BTC back into the market, it could further worsen the market crash that we are experiencing right now.

On 11th May, Terraform Labs CEO Do Kwon laid out his plans to bring UST back to the peg.

He supported a proposal to increase the minting capacity of LUNA by 4 times, to allow UST holders to cash out.

This will essentially increase the supply of LUNA by a huge proportion, and as a result, the price of LUNA may plummet.

As such, it seems that Do Kwon may be sacrificing the price of LUNA to stabilise the peg.

It remains to be seen if this strategy works. At the current time of writing, UST is way below its peg.

What goes on from here?

Things are looking extremely bleak for the entire Terra ecosystem, and all this while, Do Kwon has remained silent.

LUNA and UST are starting to be delisted from the major exchanges, and the Terra blockchain has already been halted twice.

We still don’t know for sure what the solution will be, but we hope that a solution can be carried out to save the Terra ecosystem.

What can other stablecoins do to reduce such risks?

With 2 new algorithmic stablecoins recently being launched (USN on NEAR and USDD on Tron), it will definitely be interesting to see how these projects react to this event, and what measures they will take.

Could this depegging be due to UST blowing up and expanding too fast?

USDD is promising a 30% return on their USDD stablecoin. Since it looks eerily similar to UST, this may prompt TronDAO to rethink how they would ensure USDD’s sustainability.

What does this mean for you?

There have been many factors that resulted in this debacle, and most of them are out of our control.

The confidence in the Terra ecosystem has definitely been shaken, and UST may no longer be the ‘safe haven’ as we once thought it was.

For everyday investors like us, this serves as a stark reminder that no investment is ‘risk-free’, and it is always important to fully understand the risks before going into any project.

Are you holding UST, or selling it off? What do you think about the future of the Terra ecosystem?

Let us know in the comments below!