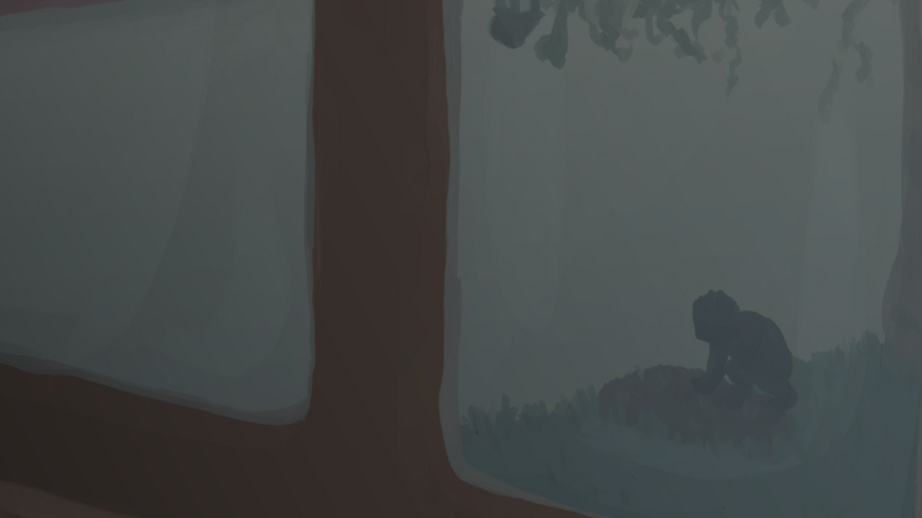 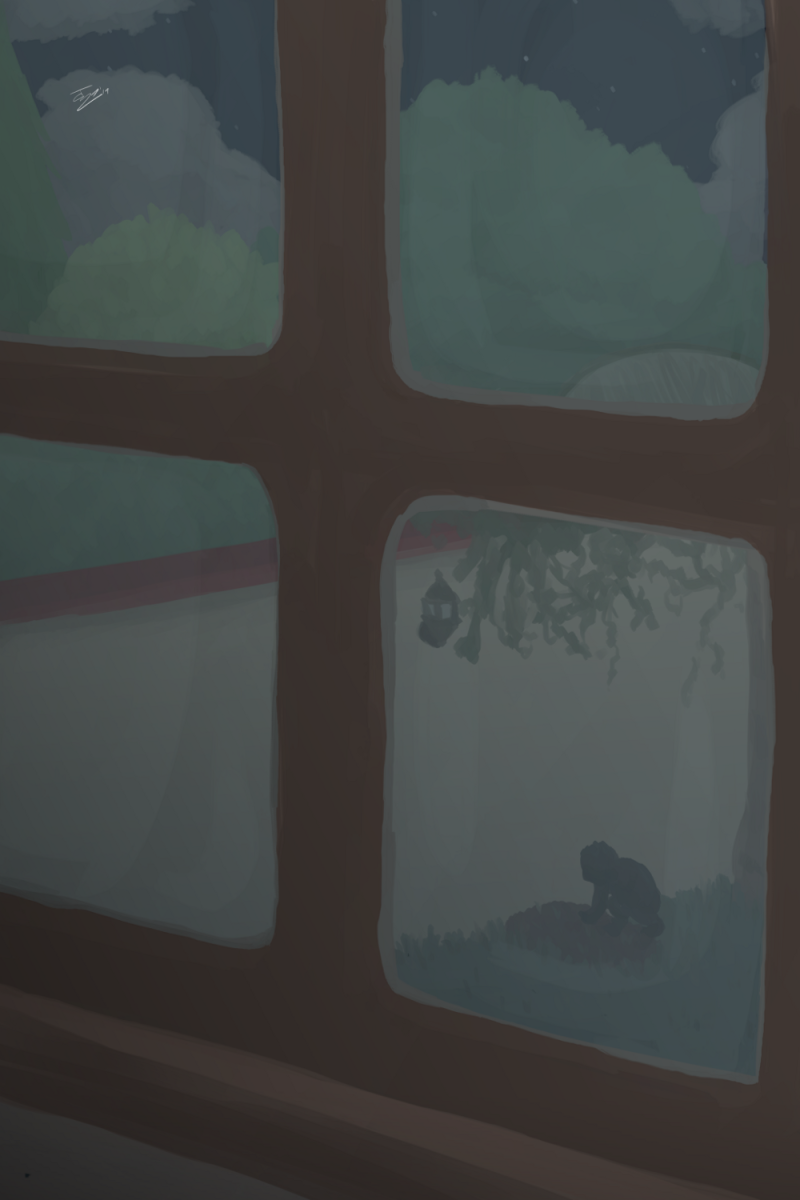 I had no idea whether the scream was in my dream or in the waking world, but I knew it was what woke me up. I was parched, so I chugged down three glasses of water. Then I brewed coffee. There was no way I could go back to sleep anyway.

I picked a random book from the ‘library’ and sat down in the living room to read. Eventually, both the book (some poetry by Antonio Machado), and the coffee soothed me, displacing the nightmares that had chased me away from my slumber. And with a calm mind, far now from the threat of the panic attack I knew loomed on the horizon, clarity returned to me.

My mind raced back to my not-dad in the dream. His features, distorted, were vaguely familiar. Reminiscent, I thought, of the man downtown. I guess I had been more terrified of him than I realized, for him to become such a powerful entity in my subconscious.

After trying to forget for the past few days, this made me think of the coyote again, of it succumbing to the Chevy, of its distorted body on the asphalt, in the hole, unforgiving and unforgettable.

At three a.m. I put the book down and paced around the living room. I stood at the window and looked out, waiting for my eyes to get used to the dark. Then my fingers let go of the coffee cup, which burst into a hundred pieces when it hit the floor, splashing hot coffee on my leg and on the walls.

There, in front of the grave, bathed in moonlight and hunched over, was a large, dark figure.

I was baffled, and it took me half a second to feel the coffee burning my leg. I hissed a curse and looked down, and when I looked back up, the figure was gone. I ran to the guest room and covered myself with blankets, shivering, crying and expecting to be killed at any moment. The sickest part of my brain had taken over and rendered my rational self useless.

Not too long after, I had fallen asleep.

I woke up at ten on the morning of the sixth day, tired and miserable. Every time I managed to sleep, time seemed to fly by, especially when I was graced with some dreamless rest.

I started to regret being there. I wondered why the regret had taken so long to arrive. Sitting on the edge of the bed, staring blankly at the wall, I also wondered if I was cursed.

A cackle came out of my sore throat. Of course I wasn’t cursed. The night before had had to be a dream, all of it. I woke up after the first nightmare and walked around, made some coffee, and ended up dozing off while looking out the window, dropping the mug, and then I went back to bed, where I had a second nightmare. There was no other explanation. I refused to acknowledge the presence in the garden, and the terror, and. And nothing. It was all a dream induced by guilt and anxiety and tiredness.

I prepared myself a small breakfast after cleaning up the coffee stains on the wall and picking up the bits of mug from the living room floor. Then I noticed the plastic water jug was empty, so I took it to the convenience store, bought a new one, and came back to the house. It was only then that I noticed the paw prints scattered all over the garden and on top of my car. I looked at the grave and saw that the newly planted grass had started to wilt.

I didn’t have time to panic about these things, for right then the doorbell rang. Mr. Domínguez’s face was, again, occupying the peephole, and he smiled cautiously when I opened the door. He seemed to want to look behind me into the house, but then his eyes set on my face and sprung wide open.

“My god, Bernardo, are you ok?”, the concern in his voice stirred some sympathy and confusion within me. Sure, I was tired, but I didn’t think I looked that bad. I wondered if the people from the convenience store had looked at me the same way, but I could not remember.

“Are you sure? I am well, I just thought I’d come and say hi”, he moved his hand towards me, and I noticed for the first time the basket he held in it. “My wife made biscuits, and we wondered if you would like some”.

I grabbed the basket and thanked him profusely.

“Well, late last night — this morning, actually, we heard screams. And snarls. My wife insisted that I go out and check. I met a few other neighbors outside who were wondering about the noise as well, especially because there haven’t been packs of stray dogs around here in the past few years. It was strange”, he pulled on his mustache. “We walked down the street and realized that the noises appeared to be coming out of Carlos and Elena’s house — ”

“I can assure you”, I said, not sure at all, “that had there been screams or snarls, I would have heard them”.

“So, you were here last night, then”, I took a step forward, an inexplicable anger rising within me.

“Excuse me?”, he took a step back, mainly because I had taken another step forward. He must have seen something in my eyes, for I doubt he would have recoiled otherwise. He appeared to be strong enough to neutralize me, easily.

It took me a couple of seconds to realize what I had said, and my bravado evaporated as fast as it had appeared. I was ashamed, and so tired. “I’m sorry, I’m — I haven’t been sleeping well, and it has been messing with me”.

“I understand”, he said, but I doubted he did.

“Dr. Magaña would be amused at my paranoia”, I blurted out, mostly to myself.

“Never mind”. He seemed intent on going, but unable to. He kept looking at my face.

“Are you sure you’re ok?”, the seriousness of his voice, both parental and overbearing, rubbed me the wrong way.

“Just leave me alone”, I said again, without thinking.

When I looked up, I was standing alone in the doorway. I stepped outside and saw him turn around the corner, and I couldn’t believe I had been so rude to him. I yelled “Thanks for the — ” but it was pointless. Shit. Now, Mr. Sierra would hear about it, and they would hate me, and call the police and find the coyote in their garden. And everyone would finally realize how much of a fucking failure I was, and it would be better if I disappeared and.

I closed the door slowly and left the biscuits next to it in the foyer. I went to the bathroom and splashed water on my face. When I saw my face in the mirror, I was surprised to see three long gashes that went from my ear to the base of my neck, and an assortment of minor scratches all over my face. None of them hurt. The bags under my eyes, though, those were incredibly heavy.

The rest of the day I spent doing chores and spacing out. I ate Mr. Domínguez’s biscuits, vacuumed, cleaned the bathrooms and dusted the furniture once more.

Unsurprisingly, I got a message from Mr. Sierra telling me that we would have a chat about my attitude towards Mr. Domínguez, and asking for pictures of the house, just to make doubly sure that all was fine. No mention was made to me of the neighbor’s ‘screams and snarls’ account, or of the scars on my face.

I obliged and sent pictures of the whole house, deliberately avoiding the paws in the garden and my maimed face. By the twentieth picture, Mr. Sierra said it was ok and to let it be. On the side, Jacobo sent me a text asking me if I was ok and saying it had taken a lot of convincing to keep his dad from phoning me, demanding that I left the house.

Honestly, insisted my anxiety, it had taken way too long for them to realize how far my incompetence stretched. It all seemed so clear now, Jacobo throwing me a bone and his parents agreeing reluctantly, not entirely trusting him or me. Never mind that, aside from the dead canine in the garden, I hadn’t done too bad a job. But maybe I had, said that voice in my head, like with everything I had ever attempted.

Dr. Magaña had assured me that, if I followed her advice and took my pills, we could keep depression at bay. I realized as I sat on the living room couch with my head in my hands that I had not taken my pills in almost a week, since arriving at the house. I repressed an impulse to chug six days’ worth of pills in one gulp and took only the two prescribed.

The sun was setting, and it was time to water the garden. There, on the mound covered with dead grass, a single bud of cempasúchitl flower had grown. In stark contrast to its orange petals, the wilted grass was yellowish, and the palm tree didn’t look too good either. I watered them, anyway.

I would deal with this the next day. The pills seemed to be taking effect, and I decided to take advantage of the high to try and have a peaceful night’s sleep.