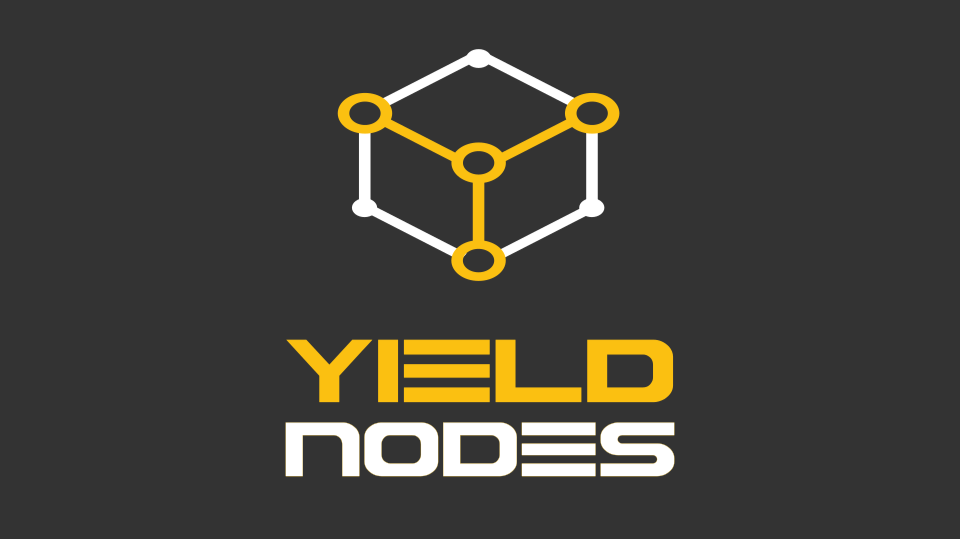 So once again, let me preface this article that this is definitely not financial advice, and for entertainment and educational purposes only. Please be sure to do your own research to find out what the best investments are for you.

Up until this past month, I've had the majority of my BTC in Midas, but with their recent decreases in their APY rates for BTC going from 18% to 13%, I thought it was time to see if there were any better alternatives out there. 13% is still not bad, but I'm letting my BTC just sit somewhere, I figured that it'd be best to try to find where I can let it sit while accruing the best return. So given the following options I'm going to go through, there's obviously a ton out there, but I'm really only looking at what I can earn that's better than Midas' 13% APY.

These were a joke. The best rates I could find were at either Nexo (8% APY) and at Celsius (5%). And to make matters worse, these both come with stipulations. On Nexo, you can only earn 8% if you accrue in Nexo's native token (not BTC) and on Celsius, it's only 5% on the 1st BTC--after that it's only 1.50% Look, I don't want knock Nexo or Celsius--I use Nexo for my XLM holdings and I regularly take advantage of Celsius' promotions (right now with AVAX, but my goal here was to accrue as much BTC as possible, and far as these centralized exchanges go, it was much better to leave these on Midas for the 13%.

When it comes to liquidity pools, I'm a huge fan of using the vaults in beefy.finance, mainly because the pools compound and also you're generally earning the native tokens of the native pool, as opposed to earning UNI on Uniswap or something else. So naturally, this was the first placed I looked. Other pools earning different altcoins on different platforms can be lucrative, but personally my main goal right now is to increase my BTC holdings, not dilute it.

Looking at the major Layer-1 Alt networks, the pools I found that were greater than 13% were as follows: 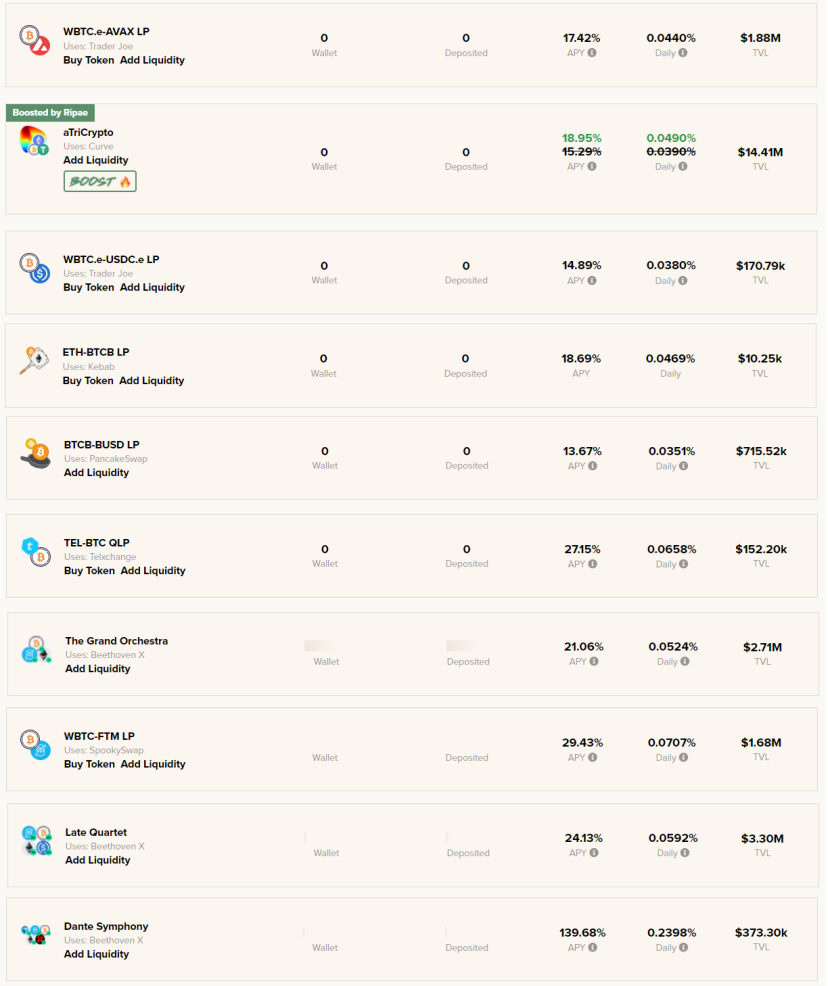 Now although some of these pools are awesome (I'm a big fan of Beethoven X) with APY's going to 139%, to be honest the only ones that I might have considered going into was the USDC.e LP or the BUSD LP on Binance, which area also incidentally the lowest ones on the list. Why? Because for my intents and purposes, I want as little exposure to impermanent loss as possible, and since USDC.e and BUSD are stable coins, I figure that those would have the lowest risks. The downsides to both of these pools is that I'd have to wrap my BTC in order to LP them on Avalanche or on Binance. If the whole FTM network didn't tank like it did last week, I would have probably considered doing the WBTC-FTM LP as well, but well...bygones...maybe once the Fantom network shows a little less volatility.

My search ultimately let me to reading about Yield Nodes. To be honest, initially I didn't even consider going in with nodes at all because even though I knew they can be profitable, I didn't think about them being profitable with BTC. I'm also usually pretty skeptical about nodes because 1) they're usually based on Ponzi-nomics which are usually unsustainable, and 2) Many nodes require you to sink in a non-refundable principle investment. Therefore, before getting into nodes, I usually try to find out how sustainable profit is and 2) how long my principle might be locked up for.  If you read my articles in the past about Presearch nodes, I really like nodes where you can withdraw your principle at any time.

Essentially with Yield Nodes they use a process called 'Masternoding" where they take your BTC and use it to operate different types of nodes. The 15-or-so nodes they operate consist of: 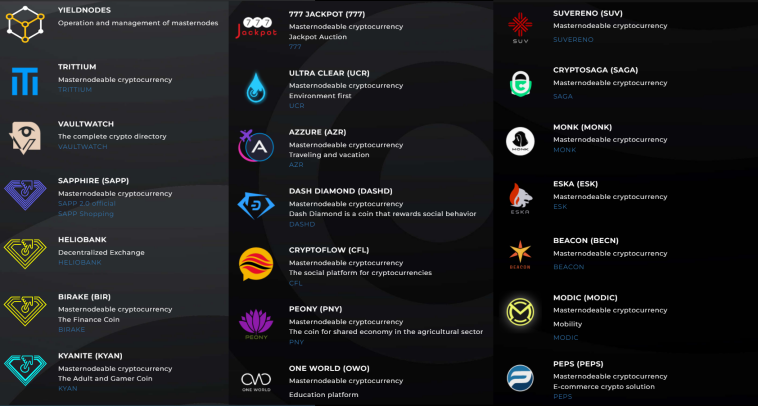 Now I'm not going to lie, I did NOT do research into each and everyone of these nodes, but I certainly have heard of a few of them, including Trittium and Sapphire. Primarily I spent my time reading and watching review videos about people that have used it, and how they were able to successfully withdraw their profits. The 5 second spiel about them is that they earn on average around 10% on your investments per month. 10% Per month. NOT APY. If you're calculating APY, non-compounding this is 120% APY, and you're monthly compounding this comes out to more than 200% APY. And a further note, these profits are consistent no matter the bullish or bearish nature of the crypto market as seen here: 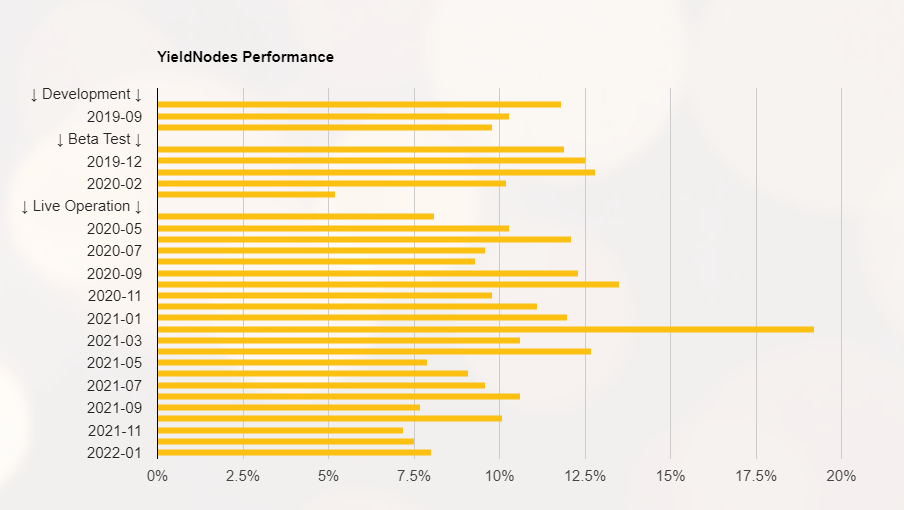 In other words, no matter how poor the market does you'll essentially get pretty consistent rates, similar to a savings account. And even if we're only going by the lowest performing months of around 7.5% returns, that still adds up to around 90% APY, which of course is significantly better than Midas' 13% APY. And also, you can see from the above chart is that they've been around since 2019, which in the world of Crypto, is a feat in itself.

And just to be clear, BTC is really only the currency of value they exchange things in, it's not necessarily BTC that you're earning profit in. Or in other words, they take your BTC, change it to different tokens/cryptos to utilize for their nodes. The nodes themselves do not run on BTC. And technically instead of BTC, you can make deposits in USDT via TRC-20. I chose BTC simply because all my USDT is in ERC-20.

OK, so there's a catch right?

Well first of all, just like with Midas, you're essentially handing your assets to someone else, trusting them that you're not going to get rugged or hacked. Not your keys, not your crypto. That being said, on the website, they are fully doxxed and in addition they have been audited. This doesn't necessarily guarantee risk protection, but that does indicate a healthy level of transparency.

Also, you can't withdraw funds for the first 6 months. Well technically, I think you can request an "emergency withdrawal" but I imagine that comes with some pretty significant fees. The cool thing though is that if "the yield drops below 5%, your rental payment will be returned along with any accrued profits." In other words, if it's not more profitable than 5% a month for 3 months, then the 6 month lock-up doesn't apply. What they do not spell out (which I think they should) is that (like with all investments) there is no guarantee that things can't go negative. The crazy part is however, is that it doesn't seem that Yield Nodes has had to encounter that issue yet. In January with the market correction, my entire portfolio went down by more than 7.5% yet Yield Nodes was returning GREATER than 7.5%.

Lastly, this actually might be a pro for many people, but Yield Nodes does require KYC. This can add to more security, but also requires you to give up personal information. Many people in the crypto-space aren't a big fan of that (i'm looking at you @Ino!).

So although it doesn't come without risk, I figure that getting at least 90% APY to possibly greater than 200% APY on my BTC is too good of an opportunity for me to miss out on. Also if you're willing to take the plunge with me, please consider using my referral link: https://yieldnodes.com?a=OKe9wjw2dbXnLMr. 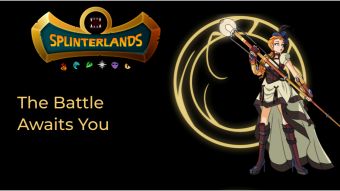 A good archer is not known by his arrows, but by his aim (A Xenith Archer Splinterlands battle challenge)