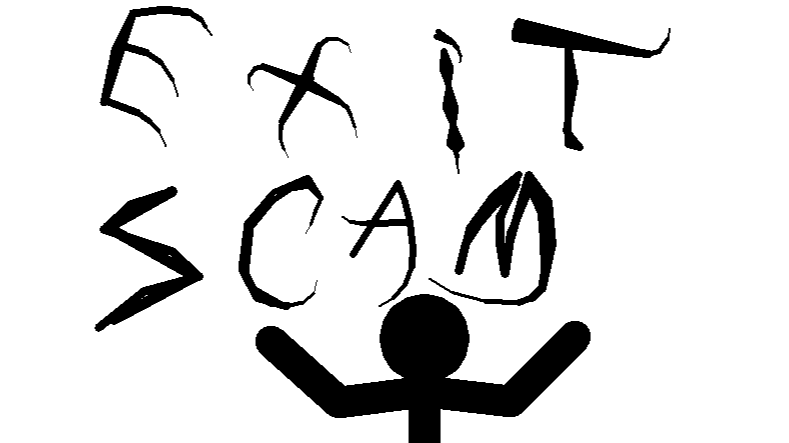 Exit Scams in Crypto and How to Avoid Them

Exit scams are one of the most notorious forms of scam on the internet. Other than the area of crypto, exit scams are performed pretty much everywhere and they take all types of forms. Knowing this, I'm primarily focusing on the different forms of exit scams that are usually present in crypto and show you how to avoid it.

What is an Exit Scam?

An exit scam is, according to the Wikipedia, 'a confidence trick where an established business stops shipping orders while receiving payment for new orders.' In short, an individual pays a certain amount of money to a business/random affiliate, and they simply just run off with the money leaving you stranded. After Elon Musk's debut in SNL a few days back, numerous websites emerged out of nowhere, pretending to be an official affiliate with SNL and Elon Musk. Some even took so far as making a fake SNL Youtube channel with a live stream that advertises said website.

Even if the website has a lock stating its connection is secure, the website itself is the whole deception. Right after SNL, websites stating that they could double your Dogecoin amount if you send them a specific amount first appeared everywhere. These sites are 100% FAKE and they used the name of Elon and SNL to look legit to unwary individuals. Many of these websites look the same, since they are pretty much just copy-pasted site code.

How to Detect and Avoid

Even though some are harder to spot than others, they give one glaring giveaway. Their first step is always asking you to pay a certain amount first. Take example from those Dogecoin scam sites. They offer to double your Doge if you send them a minimum of 20k Doge first. First rule of all time people, if someone or a site offers to double your money or send you a certain item, if you have to pay first then it is a blatant scam. No one will ever giveaway their crypto currency especially of how it has grown exponentially this year.

Be wary of sites that are too good to be true since they probably are. Before visiting a site, try checking their credibility by searching the site beforehand on your browser. Sites that appear out of nowhere may look fancy and deceiving, but keep an eye out for the obvious signs of scam attempts. Be careful and stay safe out there.

Let's see what the world will become