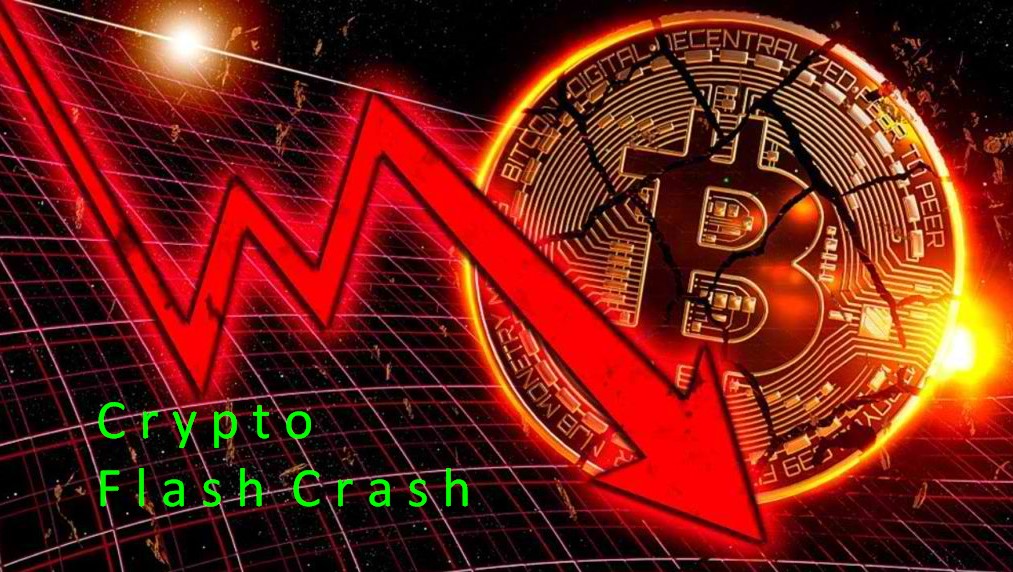 By fycee | Introduction To CryptoCurrencies | 17 May 2019

After the slow pump and the thought of the "Bull-Run" period, now a flash-crash? Then drama begins! It has really been an amazing feeling knowing that your digital assets have already grown up to 50% from the price you bought BTC and other coins a week ago but what if you'll actually notice this major drop on all exchangers that you got at the moment?

We came close to a massive SELL yesterday (May 16, 2019) as you would initially do the same thing with other traders too. But what if you still have a lot of remaining digial assets in your exchangers thinking Crypto will still do the bubble even further? Quite depressing right? But that's just what crypto is all about, highly volatile and so insane!

Were you at least able to secure a profitable SELL of your crypto into fiat yesterday up to three days that have passed?

Were you also able to buy few more because of the dip at the moment or totally got frustrated with the turn out of the prices today? 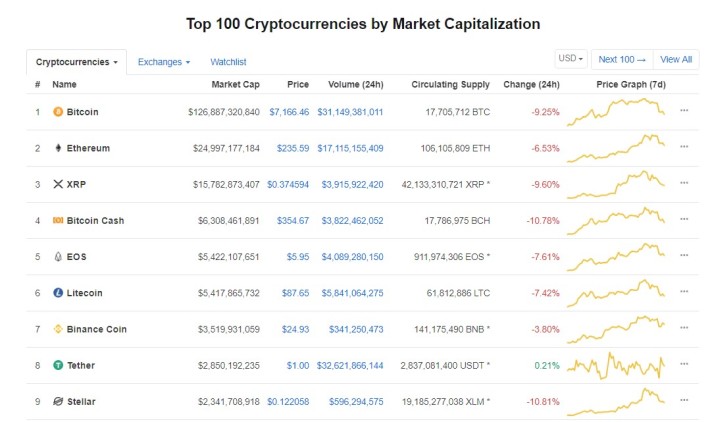 If we are going to look at the coinmarketcap all the currencies are in red except of course the stable-coin (Tether).

If we will also check BTC alone since its dominance is still in the 50%+ in this entire crypto market. Though there was a 9.25% drop, I guess this is just pretty normal case we see when we were still in the Bear Market. Just looking at it right now at a larger scale. 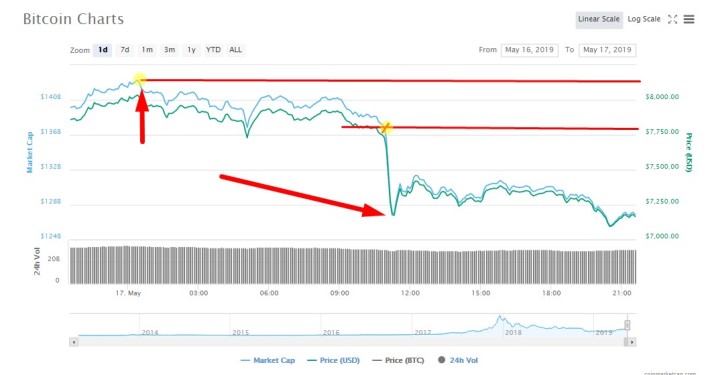 Primarily, if BTC crashes, the rest of the top cryptocurrencies will follow. Should we all agree on that? This BTC chart is a screenshot from 24-hour interval in which just right before 12 PM the sudden dip became unstoppable. Therefore, it had a hard time slowly gaining its momentum to surge back again and had its USD price stable @ $7,300 - $7,400.

What could have triggered this flash-crash?

The market has lost $20 Billion from this $1,000 dip in value of BTC to USD. Despite of what I have recently shared (just yesterday) that the market has gained $77 Billion in less that 7 days. See the post here:

Talk about being trigger happy clicking using a fat hand that might have caused this episode of the Crypto drama, a 5,000 BTC or $36 Million was exchanged into fiat at a lower price of $6,300 per unit. This SELL order was from a popular exchanger Bitstamp.

A New York judge ordered its affiliated stablecoin issuer Tether to freeze transfers to it. As covered, both firms were accused of an $850 million ‘cover-up’ earlier this year.

Just want to let everyone know that during the peak of the Bull-Run last December 2017, we also experienced a major drop last December 8, 2017 with negative 25%. So let's not create a pandemonium over it and just stay calm. For every Bull-Run, there still comes a rocky part of the journey. Though inevitable, let's still focus on this thinking that it was $77 Billion Dollar added to the market cap of the entire cryptocurrencies.

Despite of all these dramas happening on the crypto-sphere, would you still consider to invest your hard-earned money into it? Definitely a high-risk. But then once you have overcome the risk, it is truly a rewarding feeling to have gotten over it.

This is Fycee, keeping you updated with whatever it is on the crypto-market today and hoping to read your concerns as well on the comments section.

If you have the same brilliant mind and want to share your thoughts and ideas which will make you rewarded along with tons of views to your created contents, click this link, register, apply to be an author and start sharing your first post now: